Danny’s songs: Danny Hamilton and music as a means of survival 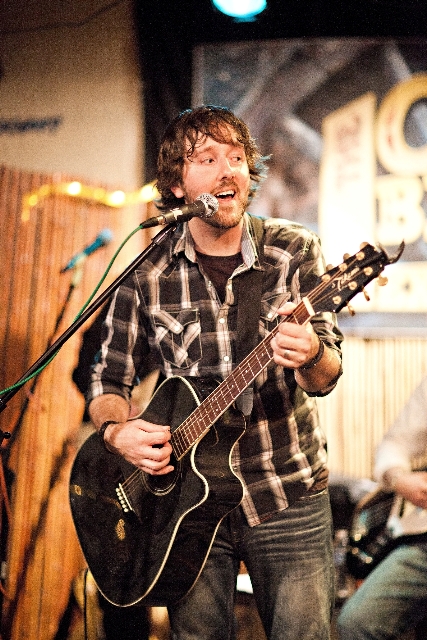 Danny Hamilton, who opens up for the Marshall Tucker Band at Brixton Thursday night and plays with his band, the Mudslingers, at Saint Rocke Monday night.

Danny Hamilton, who opens up for the Marshall Tucker Band at Brixton Thursday night and plays with his band, the Mudslingers, at Saint Rocke Monday night.

On May 2, 1991, two eighth grade boys embarked on a small adventure. They had decided to bicycle from their homes in Torrance to a shop on Pacific Coast Highway called the Psychic Eye. They were hoping to find a fortune teller.

Fate intervened. A truck bore down full steam on one of the boys, who swerved in front of the vehicle in an attempt to get out of its path. The truck driver cut his wheels sharply, and crashed directly into the other boy.

Danny Hamilton broke both his legs, one of his arms, and cracked the front of his skull. His spleen was ruptured, his ribs broken, and his internal organs generally shaken up.

“I broke a lot of stuff,” Hamilton said. “I was pretty broken.”

Hamilton managed to avoid critical injuries. But he spent nearly a month in a hospital, and doctors thought he might never walk again. When he finally went home, he made a couple discoveries. First, teenage boys don’t generally care for kids in wheelchairs.

“I mean, I actually went back to school for a couple of events…and I kind of realized at that point, ‘Oh, I don’t have any friends,’” he recalled. “Those people I thought were my friends were kind of like, ‘Ewww, a dude in a wheelchair.’ It was pretty crazy. Kids can be cruel.”

His other discovery was an old Vox acoustic guitar that happened to be laying around his house. Since he loved music and he had a lot of time on his hands, he picked it up. His life was forever changed.

“It was like people say – it’s cliché, but it was there for me,” Hamilton said. “You know, it could have just as easily been Nintendo, I guess. And I did play some Nintendo, but really music always affected me very deeply – how music could really speak to you on a level that words alone couldn’t, how you could be alone and suddenly a song comes on that says exactly how you feel at that moment. It’s so powerful.”

Hamilton somewhat miraculously recovered fully and was even able to walk only four months later, but the consequences would be long-lasting – a blood clot in his kidney nearly killed him after his release from the hospital, and he frequently experienced excruciating pain, passing seven kidney stones before he graduated high school.

“It always seemed if I drank a lot or did physical, bouncy activity, it would bounce them loose and start things rolling,” Hamilton said. “So these days I try to stay mellow.”

He continued to play music throughout his teenage years, and even took a stab at songwriting. But his songs took on an unusual, almost spooky quality.

“I had just this boring high school life, so I made things up. I dramaticized things to write about,” Hamilton said. “Those first few songs were fiction, but the strange thing is those fictitious songs all came true. So it really freaked me out – it just kept happening.”

The most portentous of these songs came from a box of apples he spotted in a friend’s garage one day. The apples came from a place called Wheeler’s Ridge. The song Hamilton wrote was centered around a fictionalized tale in which the narrator’s mother was gone and his father was in jail.

The song itself, it turned out, became a fortune teller: when Hamilton was 18, these circumstances tragically came true. His father, disoriented by a mixed dose of anti-depressant and anxiety medication, killed his mother with a butcher knife in the middle of a woeful night. He was later acquitted of murder, but the tragedy threw the family into horrible tumult. Hamilton, who’d just graduated from high school, was entrusted with caring for his 16-year-old sister.

But in an odd twist of fate, at this very same time a trust that had been established with money Danny had been awarded at the time of the truck accident became available.

“That money fed us and put a roof over our heads,” Hamilton said.

That money also allowed him to buy a new guitar. He’d left behind the old Vox when the family’s home was broken up, so he bought a new Takamine guitar. He held onto that guitar for dear life. He began writing songs again, this time as a means to process what he was going through – this time, really, as a means for survival. He wrote a collection of songs that would become his first album, Motherless Child.

“I was very shy, so music became my therapy, especially after my mom died,” Hamilton said. “That is when I really started writing my own songs, really, not made up songs inspired by apples. The guitar became my tool… It kept me centered, really, because when you are that young and vulnerable to have this tragedy – so many kids go down the wrong way, and I’ve seen it happen to tons of kids in high school. I don’t know if it was the music, the guitar, or just a good soul from my mother, who was just like a rock, going through all she went through and never letting us see her sweat. She was just amazing, so I feel fortunate just having a piece of her in me.”

His “Wheeler’s Ridge” song was transformed into “Danny’s Bridge.” The bridge – the key to both his music and his survival, he realized – was his mother. She’d played lap slide guitar and when she was alive he hadn’t fully seen her for who she was. But she would be with him every step of the way as he embarked on his musical journey.

“It’s amazing how self-centered you are when you are young,” Hamilton said. “Your world is so small. Now I wish I could hear her play. ‘Mom, tell me more about you.’ But she always loved to hear me play.”

Hamilton launched a decidedly hand-made musical career. He originally just made CDs for his family and friends, but at their urging, he began playing out. His first gig was at Sponda, a café in downtown Hermosa. He was terrified and pretty sure he was awful.

“People came up afterwards and said the songs and the CD had touched them,” he remembered. “It had helped them. And I started to see my pain can help other people through their pain.”

More songs came. A second CD, Believe, charted his progress as he started to embrace the land of the living again. Other musicians were also taking note of his musical gifts – though entirely self taught, Hamilton possesses a soulful, deep, throaty voice, and he writes with grace and an unassuming wisdom. Bassist Kalin Krum would soon join him, and local legend Teri Hitt would take Hamilton under her wing (her keyboard player, Christopher Lopez, would also later join Hamilton’s band, the Mudslingers).

His fourth record, Where Do I Fit In, was made for a small record label. In his unassuming but persistent way, Hamilton had become a professional musician, and in 2009 Nashville took note – his song “Bury the Devil” finished second in the County Music Television’s Music City Madness contest.

Something else has happened over the years. His songwriting has broadened. His earlier, more self-reflective songs have given way to Rolling Stones-style country romps. He’s still a decidedly mellow man, but Hamilton has learned how to rock n’ roll.

“In the beginning, the songs were emotional and very deep,” he said. “At some point, I started to find the rock inside – the rock n’ roll just came out.”

There is another even more unexpected quality in Hamilton’s music. “Gratitude is heaven,” Aldous Huxley once wrote, and in Hamilton’s music there is a pervasive sense of thankfulness. He has built a community of musicians – check out his YouTube channel’s “Garage Sessions,” which beautifully capture this warm and exuberantly musical scene in a garage in Torrance – and he is joyfully married to his high school sweetheart, Amber. He also has made peace with his father after not speaking to him for eight years. “Forgiveness is freedom,” Hamilton said, explaining in part his approach to this deepest of wounds.

“When I tell people my story, they ask, ‘Why are you so calm and normal?’ Why aren’t you a drug addict or some kind of crazy person?’” Hamilton said. “I don’t know why. But I do know my songs helped me, and music helped me, so if my music can be what other people’s music has been for me – if it can help anyone – that is huge. That is an incredible gift. That is why I keep playing….because I know what it feels like, whether you’ve lost family, or you feel anxiety, or depression, or whatever – the worst part is feeling alone. If I can help anyone feel less alone, that’s all I want. That is what music did for me.”

See dannyhamilton.com for more info. Danny Hamilton plays at Brixton (opening for the Marshall Tucker Band) on Thursday and with his band the Mudslingers on Monday night at Saint Rocke. ER