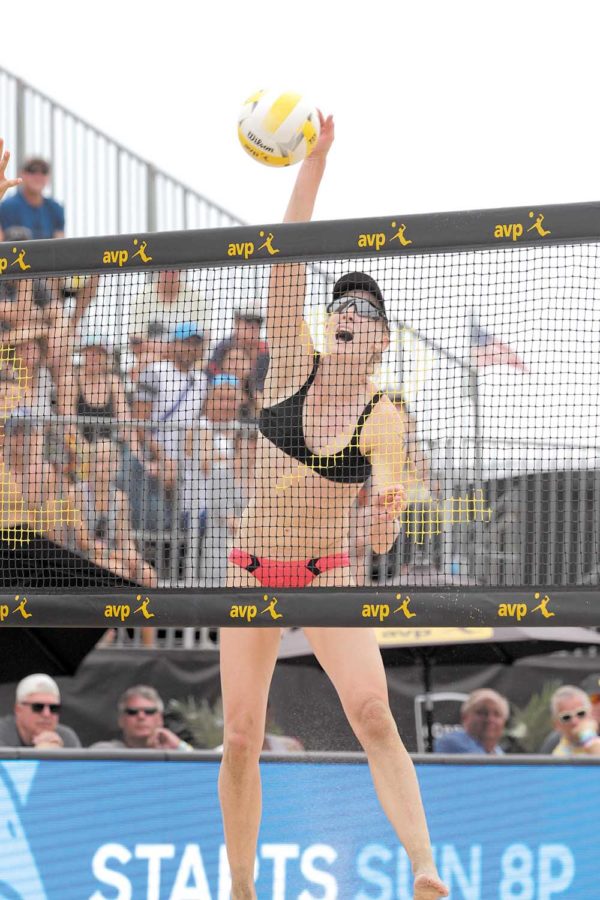 Emily Day, of Torrance, and partner Betsi Flint didn’t lose a single set on their way to winning the Hermosa Beach AVP tournament on Sunday. Photo by Ray Vidal

After a long, grueling day of monster blocks, diving sets and laser-like kill shots in front of a standing-room-only crowd at the AVP Hermosa Open – the overflow stretched all the way to the Hermosa pier — Rosie’s R8ers went home disappointed while Em’s Entourage partied like it was 1999.

Rosenthal and partner David Lee lost a tough, entertaining 3-setter in the semifinals of the men’s competition while the top-seeded Day and Betsi Flint steamrollered through a depleted main draw. Some of the big names, including  Alix Klineman and April Ross were in Europe, chasing qualifying points for the 2020 Tokyo Olympics. Indeed, Day and Flint didn’t drop a single set in five matches.

Continuing their recent AVP dominance, Day and Flint cruised to an easy victory over two qualifiers in both the semis and the Finals as Day’s blue-shirted entourage cheered madly on every point – win or lose — right down to the last point.

Another local favorite, Chase Budinger, who grew up near San Diego but adopted Hermosa as his new hometown five years ago, finally broke through and won his first AVP title with partner Casey Patterson of Thousand Oaks. It was Patterson’s 14th AVP victory.

“It was a real thrill to win it in front of so many friends and family,” Budinger said while being sprayed with champagne moments after the 3-set victory. “I’m so glad they were here to see it.” 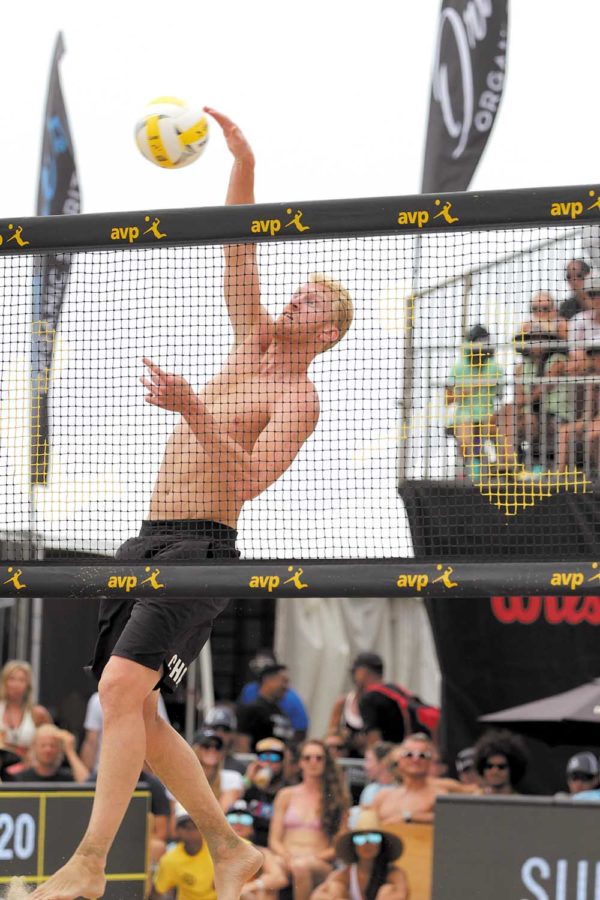 It’s been a long, strange journey to become an AVP champion for Budinger, who played high school volleyball and basketball before focusing on basketball for three years at Arizona. He then had a 7-year NBA career with the Houston Rockets and several other teams before returning to volleyball in 2017.

The skinny, 6-foot-8, laid-back Budinger teamed with the muscular, emotional Patterson to overcome 7-foot former pro baseball player Ryan “The Avatar” Doherty and his partner, Miles Evans of Redondo Beach. They grabbed the first set 25-23 when they finally cashed in their fifth set point on a Doherty kill shot that landed just wide.

But Doherty and Evans, playing in their first AVP tournament together, came back to take the second set 21-19 when Budinger slammed an out serve on set point that landed just over the far baseline.

That set up a third and decisive set that Budinger dominated after his errant serve had lost his team the second set. With every point counting for more because the third game is first to 15, not 21, Budinger seized control with the score knotted at 2-2. First he uncorked a pin-point serve that landed in the far right corner for a clean ace and a 3-2 lead, then he slammed a line-drive serve that caught the net, rolled along the top for several seconds, and finally fell straight to the ground on the other side as Doherty and Evans slumped their shoulders in disbelief and Budinger and Patterson high-fived to celebrate their great good fortune and a 4-2 lead. They knew the ball could just as easily have fallen on their side and leveled the score at 3-3.

“That was the turning point,” Budinger said afterward. Budinger then slammed a cross-court kill, followed that with a down-the-line smash, and concluded his personal burst with a monster block that pumped their lead up to 9-3.

“I’ve seen Chase play that well plenty of times before, all over the world,” Patterson said afterward. “But this time it was magnified because it was in front of a huge crowd in the third set of an AVP final.”

From there the lead grew until finally, Budinger finished it off with yet another monster block that made the final score 15-7 and set off a raucous celebration as the two sweat-soaked, sand-covered players were surrounded by friends, fans and family.

“What a thrill it is,” Budinger said. “I’ll never forget it.”

The women’s final was notable mostly because Kathryn Hogan and Megan Rice (not the Megan Rice who played volleyball at Redondo Union High School a few years ago) became the first women’s team, ever, to fight all the way through the qualifying rounds and make it to an AVP Final. But after playing 10 matches over four days they had little left to take on the dominant Day, who gained her ninth AVP title and Flint, who won her fifth.

“It’s amazing. I grew up watching this tournament and now to win it here is awesome,” Day said. “And then to have this be Betsi’s first time here and then win is incredible.”

Em’s Entourage, which kept cheering even during the post-match interviews, certainly agreed.