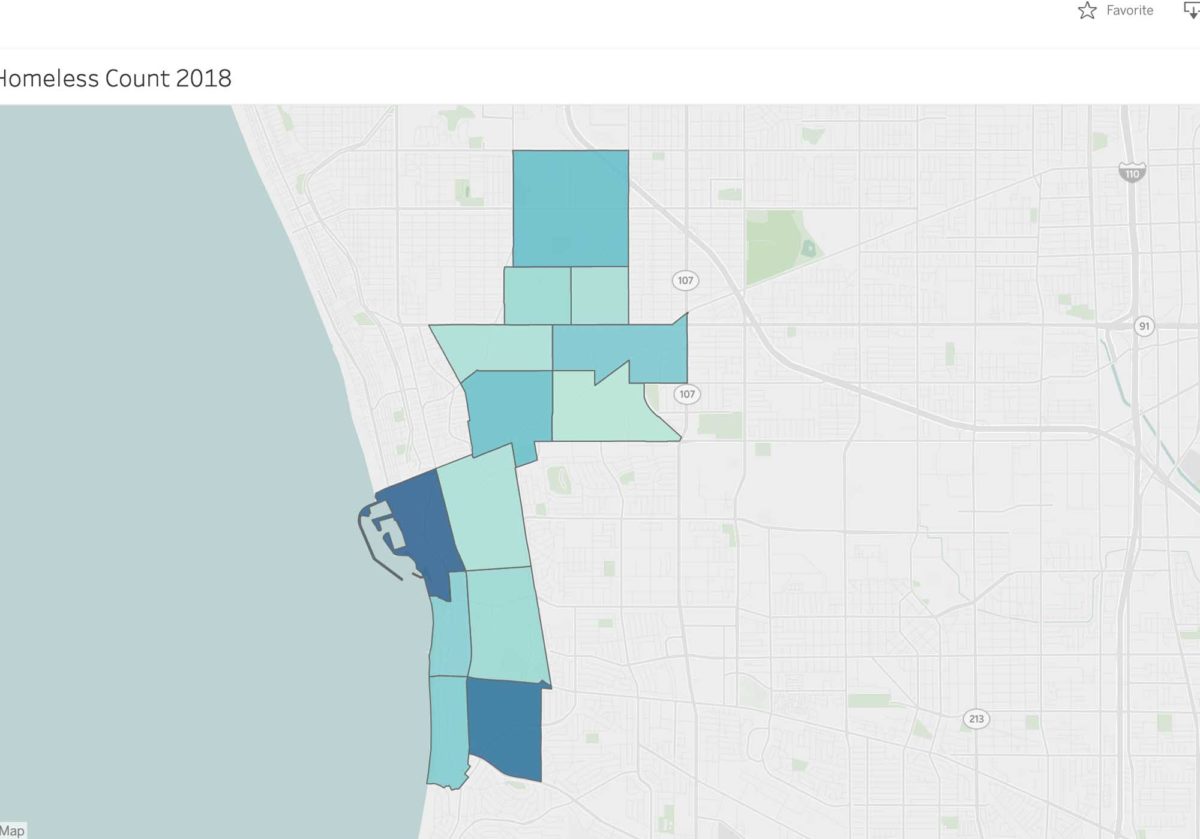 A heatmap based on the 2018 LA County Homeless Count shows concentrations of people experiencing homelessness in January 2018. Illustration by David Mendez/OpenStreetMaps

The City of Redondo Beach is forecasting tight financial times in its future, especially as it’s squeezed between likely declining tax revenues and increasing pension liabilities. But a rising outcry from residents to respond to homelessness-related problems is staring the city in the face.

The City Council began its budget process in earnest on Tuesday night by opening a public hearing, expected to conclude with the adoption of the budget on June 18.

City Manager Joe Hoefgen made the realities of the budget clear in his opening message to the City Council: If the city were to keep the status quo with this year’s budget, it would be facing a $1.2 million deficit, owing largely to the cost of participating in California’s Public Employee Retirement System. This year’s budget also plans for reduced income from sales tax, hotels’ transient occupancy tax, and utility users tax from reduced cable television use.

To bring the budget back into balance, Hoefgen has recommended that the City Council make a series of changes that includes cutting seven employee positions through departmental reorganizations, and “revenue enhancements” such as increasing fees and establishing a cost-sharing partnership with Redondo Beach Unified School District. That partnership would help fund a school-resource officer position to serve RBUSD campuses.

“We’re proposing a reduction in workforce not because we want to, but because we feel we need to in order to close a $1.2 million structural deficit that exists,” Hoefgen said. “The most controllable cost we have are our personnel costs…the council sets the level of service and my job is to bring you a staffing and operation plan to provide those services in the most efficient, effective manner possible.”

Hoefgen pointed to a number of “proactive” measures, including providing prosecution services to Hermosa Beach, outsourcing street sweeping, and making changes to the city’s insurance programs.

But according to many residents in attendance on Tuesday night, the biggest issue facing the city is its response to homelessness.

For weeks, residents have taken to the lectern before the City Council to air grievances about homelessness issues. One woman was shaken as she described being verbally harassed and threatened while walking her dog; others have cited public urination and defecation, some have complained of drug use and still others have told tales of having their homes disturbed or broken into.

Tuesday’s meeting was also affected, when one man experiencing homelessness, known only as Kenn, interrupted the meeting repeatedly to accuse Redondo Beach Police of excessive force. After multiple disruptions, Kenn was removed from Council chambers by police officers in attendance.

One woman, Ashley Roberts, stood up to defend herself and her friends. Roberts — who prefers the terms “unsheltered” or “houseless” — is a graduate of Redondo Beach schools, and said she finds herself homeless because of a domestic violence situation.

“There are a variety of people with different stories…people look at us like we’re not human. We’re people too — you don’t know what someone else has been through,” Roberts said. “I just want people to look at homeless, unsheltered people differently…there’s no transitional housing, no shelters around — can you imagine me on Skid Row, or somewhere worse?”

Roberts, and another speaker defending the “unsheltered,“ Andrew Gober, are locals who have long called this area home. With assistance from the City of Redondo Beach and its partners, such as Harbor Interfaith, they are among a group of men and women who have been granted Section 8 housing vouchers, and have found work.

So programs appear to be working when people accept help. The problem, as identified by City Attorney Michael Webb, is how the City responds to law-breaking elements. To that end, Webb has proposed a pilot program focusing on prosecution of “repeat drug offenders experiencing homelessness” and “significant, longstanding repeat offenders.”

The city’s Quality of Life prosecutor would then have their duties expanded to provide focused prosecution of chronic drug users and quality-of-life crimes. Having one prosecutor focus on those crimes would enable them to create potential sentencing alternatives and help defendants connect to available services.

“We’ve done better than most, but we haven’t done an effective job of dealing with those who are causing the problems,” Webb said. Once the City has done that effectively, Webb thinks that residents will see other people experiencing homelessness in a different light.

The pilot program would cost the city more than $55,000 for FY 2019-’20; however, the City Council seemed to have a favorable response, as Mayor Bill Brand joked that they should “get started tomorrow.”

The overall budget discussion was then tabled until the next meeting, June 11.