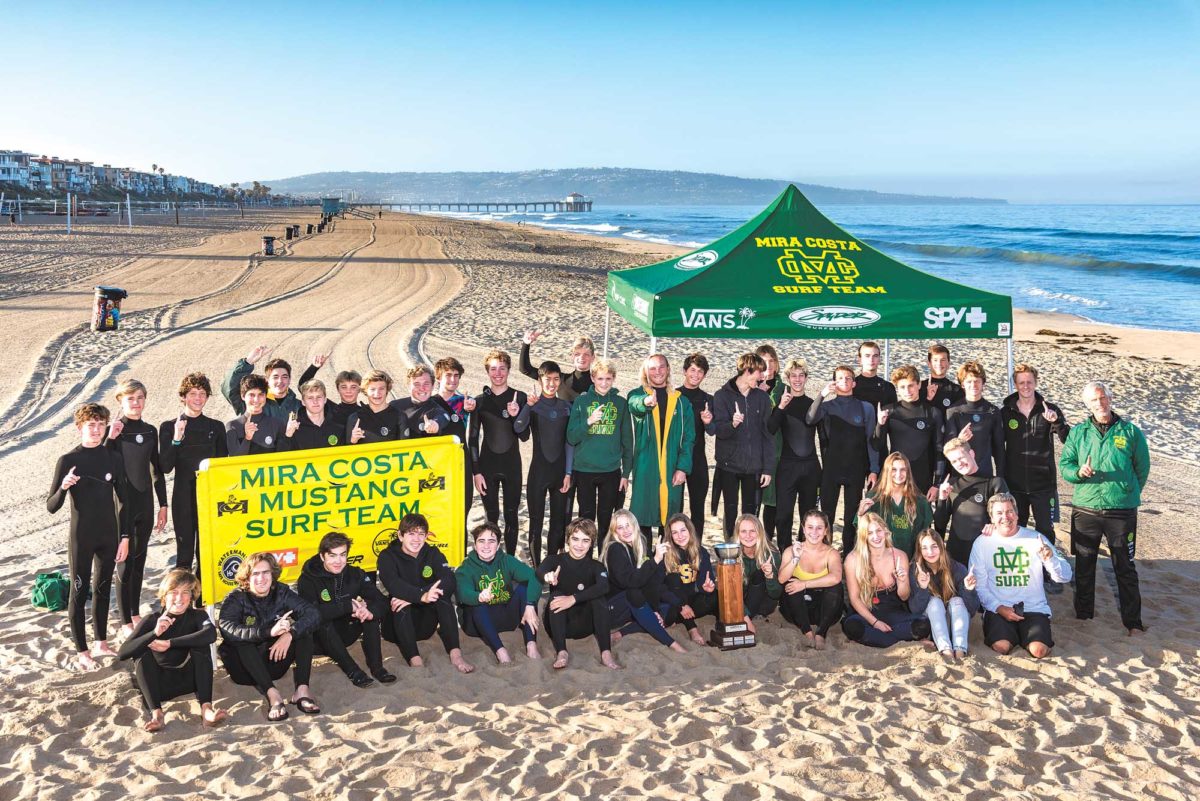 The Mira Costa surf team won its 10th consecutive league title this season, and is headed to nationals next weekend. Photos by Steve Gaffney

There was a time last fall when Dickie O’Reilly thought it would be a typical South Bay high school surf season.

Then the storms came.

“We started in early October, and we went through until Christmas Break without any hiccups at all,” said O’Reilly, league director of the South Bay Scholastic Surfing Association. “We were able to run contests every week, and I thought the season was on track to finish in late March or early April like normal. But then we got into early January. We’ve never had as many delays or rescheduled contests.” 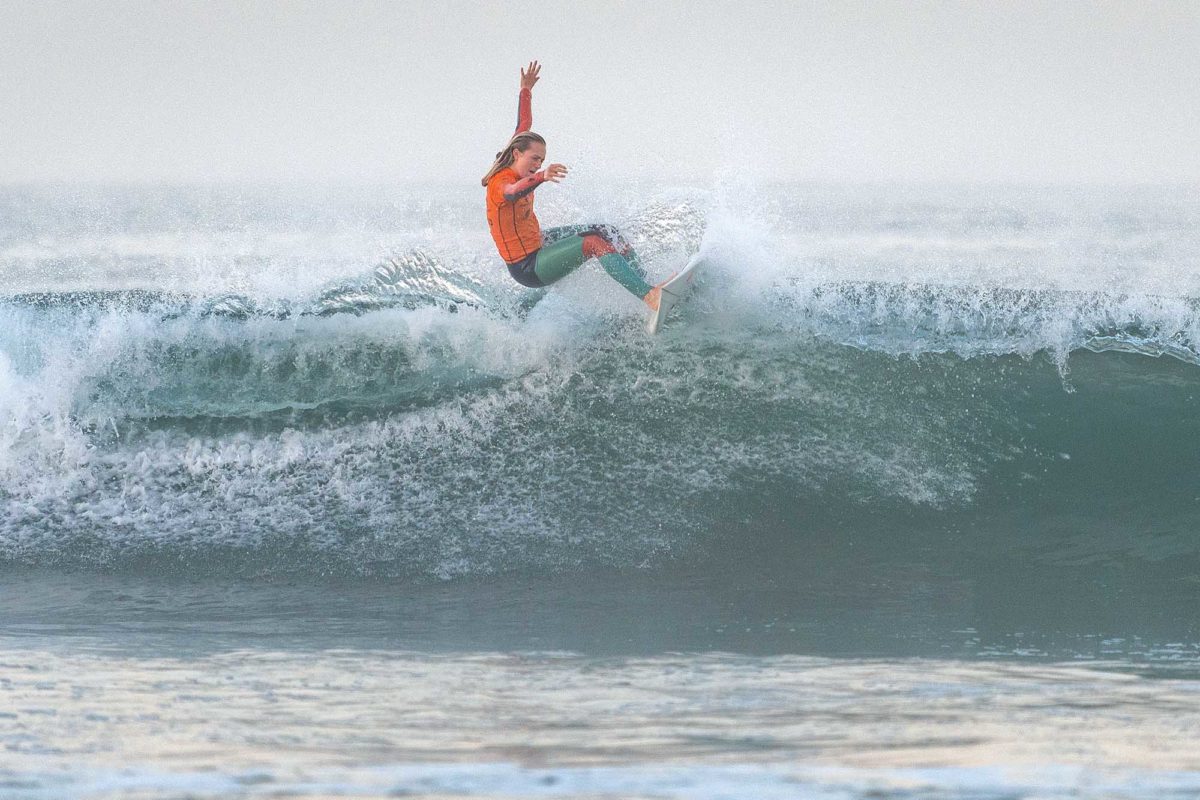 Megan Seth goes off the lip in Costa’s victory over South High. The clean conditions that characterized that match wouldn’t last, with wild weather throwing the year’s schedule into chaos.

An assembly line of powerful storms delivered surf more appropriate for the South Bay Big Wave Challenge than a contest with kids barely into their teens. Unrelenting rainfall would create incredible sandbars, then overwhelm them. Spots that were once firing turned into a minefield of closeouts. And then came a long flat spell for much of February and March, typically the heart of the winter surf season.

“In all the years I’ve been involved, this is definitely the craziest season I’ve dealt with,” said O’Reilly, who organized the SBSSA after director John Joseph stepped down from its predecessor organization, and is himself a former high school surfing standout.

But amid all the chaos, at least one thing about the year was not surprising: Mira Costa High School’s surf team came out on top. They finished 5-0 on the year, collected their 10th consecutive South Bay high school surfing championship, and their riders collected impressive individual awards. This weekend, Costa is headed to the National Interscholastic Championship at Salt Creek in Dana Point.

There, they will face off against some of the best high school surfers in the country. Teams from Hawaii, New Jersey and Florida are flying in. But the teams most likely to challenge the Mustangs have an even shorter drive than they do: perennial powerhouses in Orange County like Huntington Beach High School and San Clemente High School.

Mira Costa coach Tracy Geller said those Orange County schools remain the top competitors. But, as Mira Costa continues its run of success, it has put its neighbors to the south on notice.

“We have definitely made a mark for ourselves. They absolutely know who we are,” Geller said. 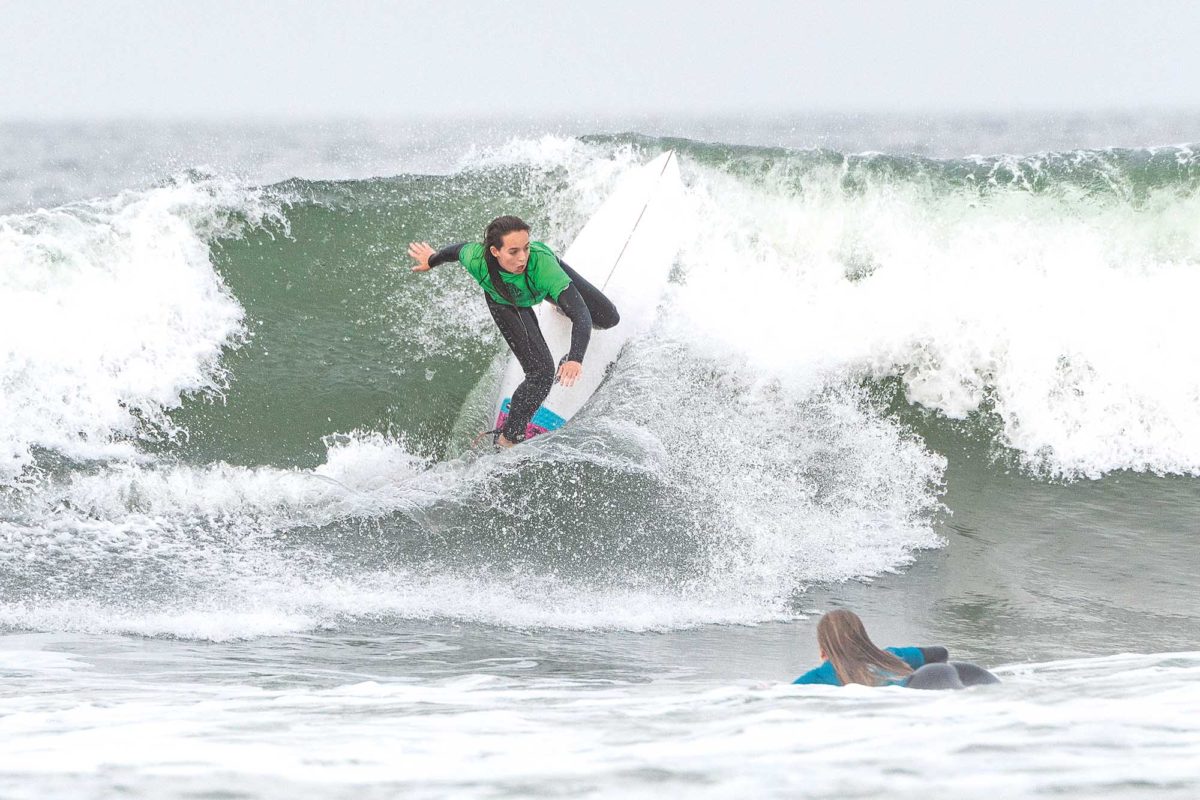 Costa senior Zach Rosenberg said this year’s team is the deepest he’s ever been a part of. Previous years have had massive talents, like Cody Purcell from the Class of 2017, but this year’s chemistry has helped push Costa to a new level of dominance. Everyone on the team, Rosenberg said, showed a level of growth.

“This year we have a strong group of sophomores emerging. It’s different compared to last year when they were younger, and still getting used to what the team is about,” Rosenberg said. 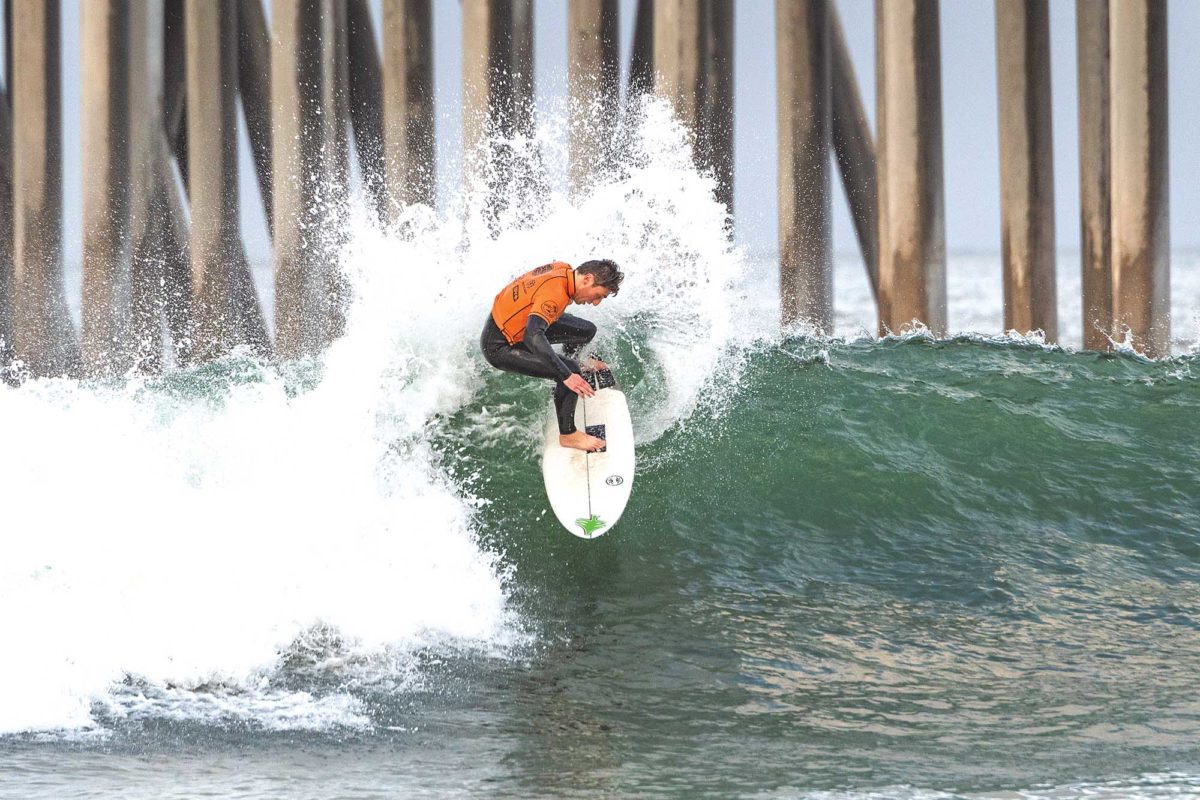 Zach Rosenberg, throwing buckets in Huntington. Costa has its share of star performers, but it is depth that has driven its success.

Depth is Mira Costa’s strength. It may sound odd to those who have never seen a high school surfing contest, or who imagine competitive surfing as a strictly individual affair. A surfer may be alone on a wave, but he or she rides with a season’s worth of practice, and a team’s worth of help.

Under SBSSA rules, each team has multiple surfers in the water for each heat. And the rules of surfing etiquette, in which the “deepest” surfer has priority on a wave, still apply. But, as Rosenberg pointed out, “you are allowed to snake your own teammate.”

“If you know you have two good waves already, you can let someone on your team cut you off.

It’s about adding up your scores, and making sure everybody in the heat is doing well and getting the scores they need,” he said.

Keeping this strategy straight in a playing field that is constantly moving, as well as constantly providing the temptation of a good ride, is not easy. And it’s where the second “d” of Costa’s success comes in: discipline.

This is Mira Costa’s third season of getting rid of the “surf PE” option. The result, Geller said, is a smaller but more dedicated crew of people showing up at 26th Street each morning. The team has more people interested than it can accommodate, and everyone now on the team views the program as, at least, a five-days-a-week commitment. The team also works out with a fitness trainer twice a week. Young shredders start to see the connection between squats and snaps, alignment and airs, core strength and cutbacks. 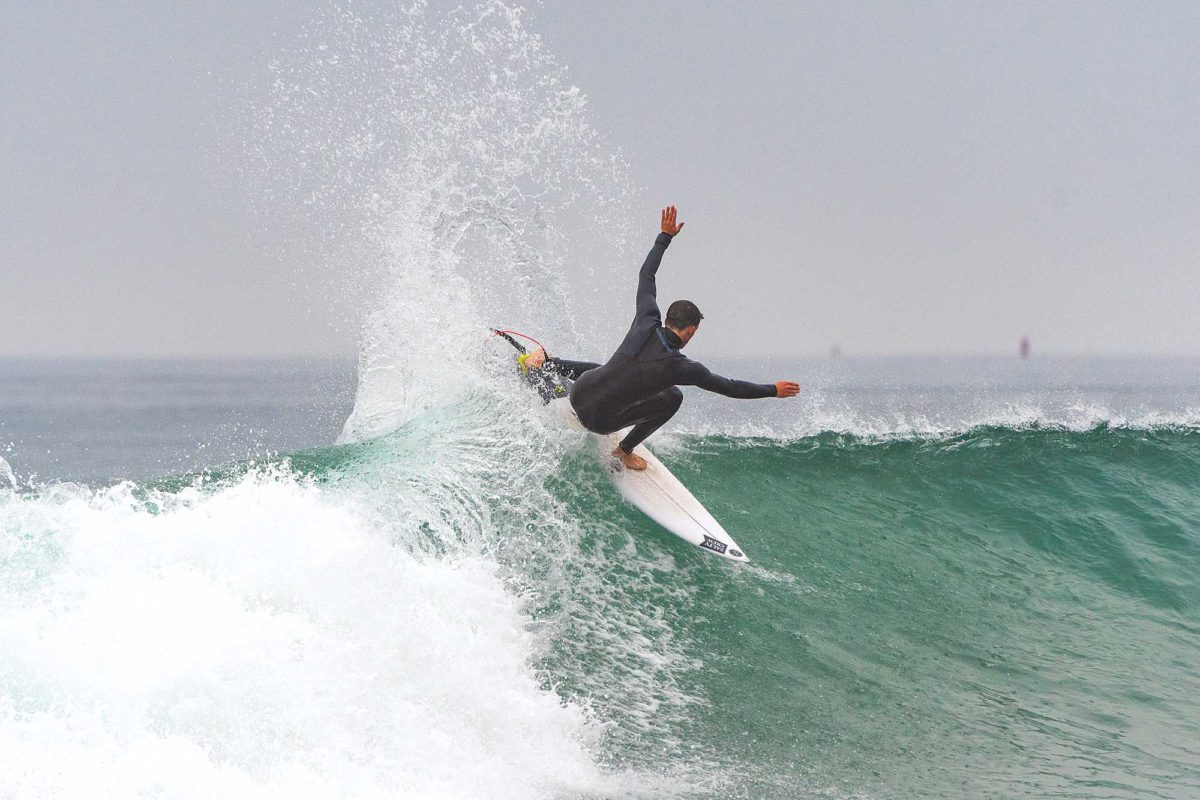 Alex Fry goes fins out in Manhattan Beach. Although Costa is losing a core of seniors, it has plenty of talent in the pipeline.

In this way, Mira Costa’s run of success embodies a bigger trend in surfing: It is no longer the preserve of stoners and derelicts. Kids at Costa and their competitors are part of a blossoming of youth performance that comes from taking the sport more seriously. Parents who once viewed surfing as vaguely disreputable, to be squeezed in between “real” sports and school if at all, are now eagerly driving their kids up and down the coast. And, all the while, the kids are managing to excel in the classroom.

Shortly before being interviewed, Geller was submitting paperwork for the team for nationals. Though he knows his kids are smart, he found himself marvelling at the number of 4.0 grade point averages.

“Gone are the days of Spicoli,” he joked.

One of the Mustangs’ proudest moments this season came in the midst of something they don’t experience very often: a loss.

On May 2, Mira Costa arrived at the Huntington Beach Pier early for their head-to-head match with Huntington Beach High School. The kids began warming up while waiting for the other team to arrive, but the crowd did not thin once they did. People surfing the south side of the pier stayed in the ocean, because Huntington, unlike other venues, does not clear the water for high school contests.

It was not exactly neutral ground. The crowd in the water knew what was happening, and didn’t make things easier for the Mustangs. Geller compared it to “trying to play a soccer game with some guy running out and blocking the goalie’s view.”

The Mustangs surfed well, and managed to outscore the Oilers in several heats. In the end, they fell three points short of a victory against Huntington, widely regarded as one of the top surf teams in the country. Williams and other team members described it as a moment when the team saw what it was capable of. 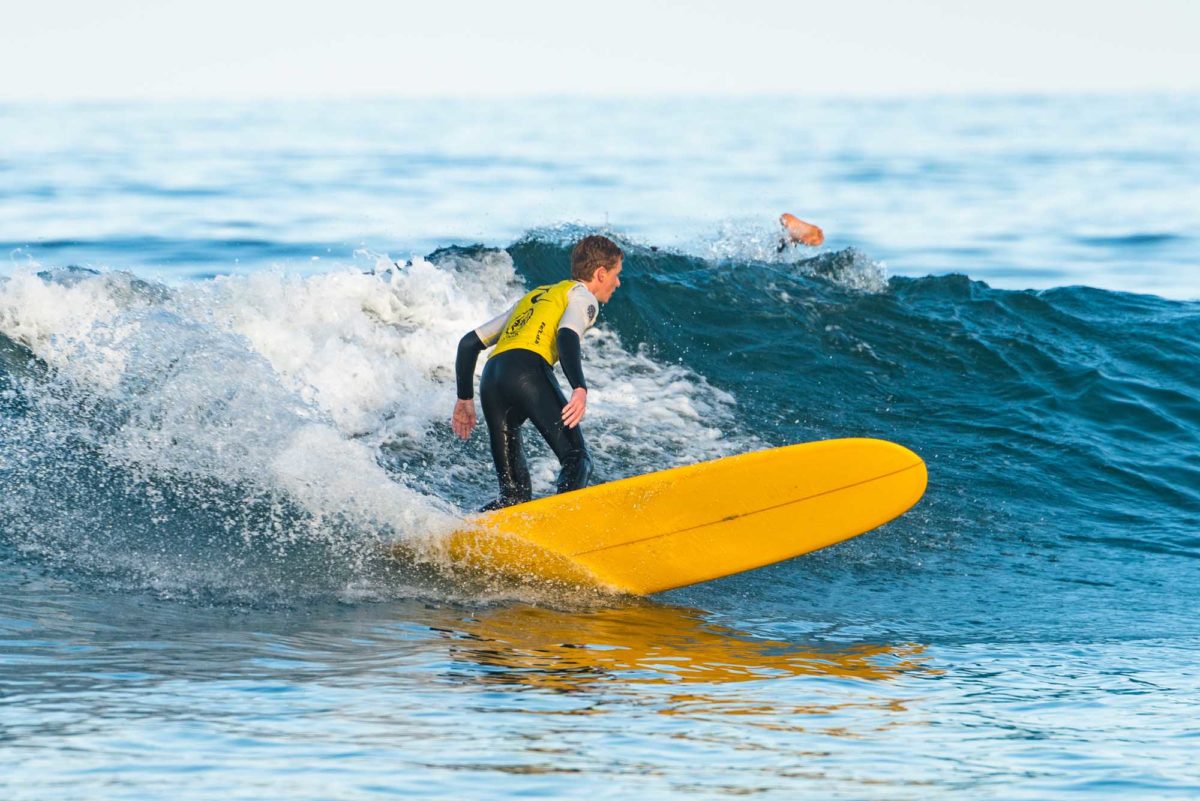 Longboarder Coco Vergnolle was a strong performer throughout the season for the Mustangs.

“To come within three points despite all that is really something to be proud of. That was definitely an arrival moment,” Geller said.

Costa will have its work cut out for it at nationals this weekend. The format changes from the SBSSA season, with fewer competitors in the water, which means Costa won’t be able to rely on its depth as much as it has in the past. On the bright side, the forecast for Salt Creek has bumped up in the past few days, which will help the Mustangs, who tend to do better in the solid stuff.

“It’s just so important to have our kids get a good rhythm. If you don’t get into a good rhythm, you end up chasing bad waves. And poor wave selection is the bane of our existence. Every wave you take should build on the wave before. If you’ve already got a 2, you don’t need to scramble for something smaller,” Geller said.

Even if the surf pumps, Costa will have to push themselves. Competitive surfing is still playing catchup to the schools in Orange County, who had a solid head start. O’Reilly recalled that, when Joseph first got the high school series started in the early ‘90s, he brought in someone from Orange County to help him get it going, because the area already had an established high school surfing league.