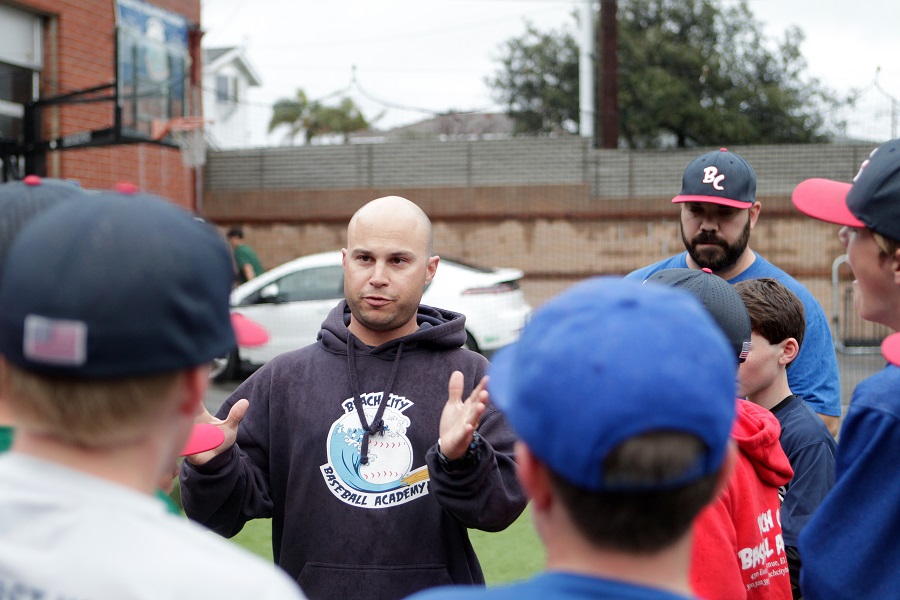 Ryan Lopez discusses the drills his 12 and under players will go through. Photo

When sports and El Segundo are mentioned in the same sentence, one usually thinks of baseball.

The small town has produced many outstanding players — most notably Hall of Famer George Brett and his brother Ken, a former major league pitcher and All Star.

Others include major league umpire Derryl Cousins and professional players Scott McGregor, Zak Shinall, Billy Traber as well as George Myatt, who played in the major leagues from 1938-47 before managing and coaching in the pros until 1972.

Although it has no affiliation to local high schools, Beach City Baseball Academy (BCBA) has become a destination for young players who desire to excel playing the national pastime.

With the support of members and patrons, BCBA is able to support many community causes with scholarships, sponsorships, donations, international exchange programs and its renowned special needs clinic. Free lessons for special needs kids are available on weekends.

In addition to its baseball and softball travel teams, BCBA offers memberships, private and semi-private lessons as well as rentals to the public. The staff of skilled instructors not only teach the game, but build confidence in their young players.

Senior baseball coaches, who are all junior partners at BCBA, are El Segundo High School alumni Alberto Concepcion (class of ‘99) and Ryan Lopez (class of ‘06 and CIF champion) and Kenny Woods (‘97 graduate of Palisades High).

In 1996, Concepcion played in the Babe Ruth World Series with his El Segundo teammates. 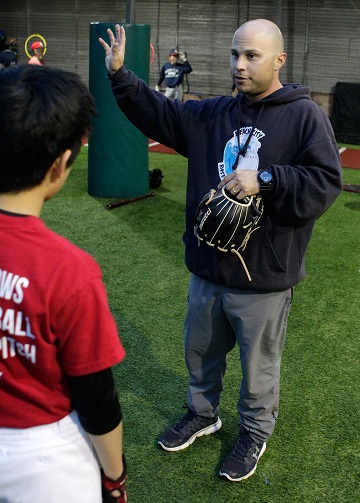 Along with being an honor student, Concepcion was a High School All American and considered one of the top prep sluggers in California State history. At El Segundo he set state, career and single-season records for RBIs (171 in his career and 70 in 1998).

Concepcion tied the state single-season home run record of 20 as a senior in 1999, a year in which he also tied a national record by hitting a homerun in six consecutive at bats.

A 3-year starter at USC who played in two college World Series, Concepcion was an All-American and the PAC-10 Player of the Year his junior year.

He was later drafted by the Boston Red Sox, reaching the AAA level as a professional.

Ryan won the 2009 Rawlings Collegiate Gold Glove for his defense as a second baseman.

Born and raised in Los Angeles, Woods played collegiate ball at Lewis-Clark State College in Idaho before being drafted by the San Francisco Giants.

Private batting lessons are now available at BCBA with former Major League Baseball great Kenny Lofton, a four-time Gold Glove winner also known for his speed on the base paths and timely hitting. Each 30-minute lesson is $100.

A  Little Sluggers program is offered for ages 4-6 and a Jr. Prospects program for 7-8.

“We typically have 150-200 players each season,” Lopez said. “The majority come from the South Bay Area.”

Also offered are $15 baseball and softball clinics on Monday, Tuesday, Thursday and Friday nights, which teach the fundamentals of hitting, pitching, fielding and catching.

High school baseball and softball hitters can receive 75 minutes of hitting in a group workout every Monday from 8-9:15 p.m., overseen by Concepcion,

Along with its baseball camps, the BCBA sponsors The Beach City Prospects, a developmental traveling club teams (including the Lady Prospects softball team) who compete in a variety of tournaments. The program is open for tryout by invitation to players who show excellence in skills and sportsmanship.

The Prospects program ranges from a 7U division up to 14U for baseball.

They have year-round travel teams along with recreational teams, which include 10U,12U & 14U softball teams who play competitively and in local friendly games throughout the season.

Most travel teams play tournament-style baseball with 3 to 5 games a weekend, 1 to 2 times a month throughout Southern California.

“We travel to Arizona every year for a tournament along with checking out a Major League Baseball spring training game with the team,” Lopez said. “Every summer we take 2 to 3 teams to Cooperstown, New York. It is a week-long, camp-like tournament where the boys sleep in bunk houses and play up to 11 games. We also get to go to the National Baseball Hall of Fame with players and families. It’s an unforgettable trip for the 12 year olds.”

Rai Dobbs ran the BCBA softball program during the fall and is continuing with training at the facility through the spring.

Dobbs played at Arizona State University from 2012-2016. After graduation, she coached for the MLB Urban Youth Academy for more than two  years and is now into her second year as Varsity Coach at Culver City High School.

“This fall we had a 10U and a 12U team,” Dobbs said. “We considered ourselves development travel teams, meaning it was more about giving the girls exposure to a higher level play versus winning. Also with that, we are about development at this age and teaching proper fundamentals. There was a tryout in August for the two teams and we would love to see if it could grow into more teams this coming fall.

“Right now the girls are back to playing little league but I run training for those who still want a higher level of instruction. We offer it Monday and Wednesday nights.”