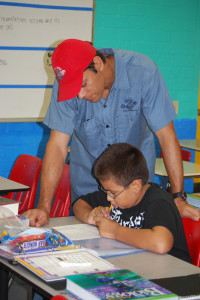 Eric Fonoimoana is asking for $10 donations for his Dig 4 Kids charity in the hopes of winning a $10,000 prize for most contributors in the Racing for a Cause competition.

A $10 donation could produce a $10,000 bonus for Eric Fonoimoana’s Dig for Kids. The 2000 volleyball Olympic gold medalist is one of 55 Athletes for Hope competing in Racing for a Cause. The athletes who raise the most money for their charities, or who receive the most individual donations will receive a $10,000 contribution from Global Giving, whose motto is “A million little earth changing ideas.”
On Monday, Global Giving’s web site showed Dig for Kids in fourth place for most contributors (130) and ninth place for most money raised ($3,500). The first place leader, professional soccer player Kristine Lilly, had raised $12,000 from 266 contributors for her homeless people charity.
“My goal is to win the most individual contributors award, which is why I’m asking just $10 contributions,” Fonoimoana said.
The strategy has already paid off. On Monday, Dig for Kids was awarded a $500 bonus for most individual contributions that day, after 20 of Fonoimoana’s fellow Realtors at South Bay Brokers contributed $10 each.
Dig 4 Kids is an after school program for low-income communities. Kids are offered academic and athletic mentoring by Fonoimonana and other professional volleyball players.
To help Dig 4 Kids win the $10,000 prize, supporters are asked to make make a $10 donation at http://www.globalgiving.org/projects/dig4kids/.
To track Dig 4 Kid’s position in Race for a Cause visit http://www.globalgiving.org/projects/dig4kids.
The deadline for Racing for a Cause is Friday, January 15. ER