Diego’s Umbrella Got Lasers and Lesbians 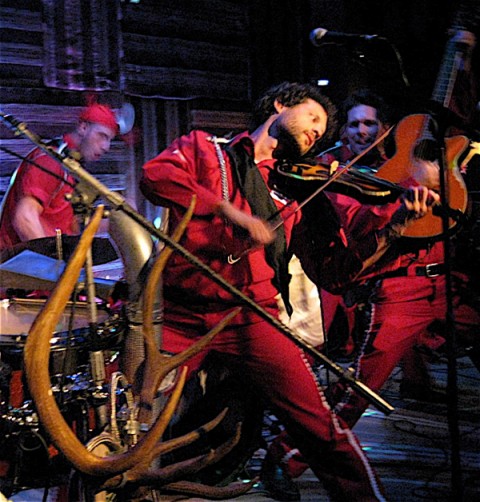 Diego’s Umbrella absolutely lit Saint Rocke on fire Saturday night with their muy caliente Latin-gypsy-polka, rocking jam-fusion music (if that makes any sense at all). They’ve been aptly described as a “Mexi-Cali gypsy pirate polka rock & roll band.” This is one of the most high energy and fun performances the South Bay can enjoy. There must be something in the drinking water up in San Francisco that makes people like this so crazy.

Every member of Diego’s Umbrella is a compelling character and performer. Together, they brought a quirky, brilliant performance to an energized audience rapt in laughter and dance. Their stage presence was completely engaging and almost melodramatically theatrical: gesticulating madly, with their red, matador-esque marching band uniforms (complete with those funny Tex-Mex style ties). Then before you knew it, the acoustic guitarist and violinist were jamming beside you in the audience. They marched right off that stage, and didn’t quite stop there, not without the guitarist grabbing a good view of you from the bar top counter. One poor soul took the stage for a Latin-gyp-polka “Happy Birthday,” Diego style, before being told “Happy birthday, now get the f— off the stage…do a stage dive and get the f— off the stage,” (in playful humor, of course).

Diego’s songs can be serious as well as playful, and all the boys in this band are equipped with good voices. “I’ve got my lasers, I’ve got my lesbians…” were some of the more hilarious lyrics coming from the stage. And when the guitarist ordered a pitcher of water, he received affectionate heckling from band mates; “I hope you get electrocuted, you fairy.” While Diego’s Umbrella emits an overt sense of humor and play, their music remains top notch and complex. The band is centered around electric violin and nylon-stringedd guitar; the drummer pounds a freaked-out barrage onto his kit; the bass booms and thumps into your hips and feet; a trombone appears, tambourines rattle, and one of the three guitarists also tends to a percussion station that’s complete with antlers, pipes and pressure gauges. An infused spectrum of sound painted the air within Saint Rocke — a modern construction pulling from earlier realms of gypsy, Latin, polka, ska, reggae — and it’s all driven by mad scientists in crazy uniforms, rocking their instruments with a ferocity and precision of shocking degree. One must wonder where on earth such a unique but effectual sound originates. (I can envision these boys driving the insanity and festivity of some kind of Spanish oompah mutation of Munich’s Oktoberfest.)

The theme of Saturday night’s show was: Fun. Diego’s Umbrella isn’t just a performance, it’s an experience. If you missed the crazy train on this one, be sure to get yourself a ticket when they come back around in July. Easy Reader will keep you informed.

Cafe Boogaloo will host a Benefit Show for Autism, Saturday, April 3, from 4:30-7:30 p.m. All proceeds benefit Growinggreat and Autism Speaks, the nation’s largest science and advocacy organization funding research for cause, prevention, treatment, and cure for autism. Secure a ticket early, as this event will likely sell out. Pre-sale tickets are available for $20 at www.eatplaygive.com, which includes five raffle tickets; $25 at the door.

Local residents, and sisters, Stefanie and Sarah Gelb, organized this event to help spread autism awareness and to promote youth projects, healthy living and alternative medicine. The Gelb sisters respectively represent the organizations Firststeps For Kids and Growinggreat. In her line of work, Stephanie Gelb has observed firsthand the highly effective therapeutic benefits of music for children with autism, hence taking the cause to Boogaloo. Local reggae superstars Fortunate Youth and Santa Cruz heavy hitters Sourgrass will be taking their artistry and musical gifts to the stage in support.

Fortunate Youth has sprouted straight from our own backyards, and while Sourgrass finds many of its roots planted here in the South Bay as well, they now come to us from Santa Cruz. Fortunate Youth is a fluidly talented reggae and dub outfit, psyching us out with keyboards, brass, and the smell of skunks in the air. Sourgrass is a powerful rock & roll band, deeply based in blues, funk, jam, and sexy moves.

For more information on the Autism Benefit show, visit www.eatplaygive.com. To learn more about Sourgrass, Fortunate Youth, and Diego’s Umbrella, and to hear their music, check them out on www.DirtyHippieRadio.com. Listen, learn, read on…