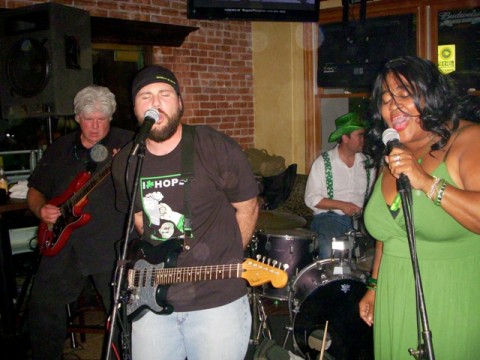 Regardless of the absence of traditional Irish music in a traditional Irish pub, Midnight Lamp shone the way for anyone who forgot how to shake their ass on Saint Patrick’s Day. Sangria’s celebration of our beloved holiday of green debauchery found the Lamp in a different element than they’re used to. This heavy hitting Redondo-based group, which has performed in such reputable venues as Cafe Boogaloo, Brixton, Saint Rocke, and B.B. King’s, engaged the green-beer drinking masses by bringing a set of mostly cover tunes. Typically, they throw a few covers into their mix of originals, but avid partygoers tend to crave familiarity while their primary focus is on the drink more than the jam. Fortunately for us, Midnight Lamp demonstrated this understanding without suffering any sacrifice to the jam. This power blues, funk, rock n roll jam band possess a unique ability to completely reface cover songs, making them entirely their own. It was a smart and friendly approach to the Saint Pat’s festivity: engaging the audiences’ subconscious with the appeal of familiarity, while still thickly pouring on the original elements that make Midnight Lamp shine so brightly.

Sangria’s patrons were dosed with heavy, jamming, boogying versions from Sly Stone, Bill Withers, Hendrix, The Meters…but it wouldn’t even have mattered if they were performing Happy Birthday. Guitarist Fred Flentye’s thick chops and soaring leads slapped everyone around enough to leave behind many expressions suggesting a mind well blown. Accompanying the irrefutable power of Lamp’s veteran virtuoso was Joyce Isles’ bellowing voice, which puts every man, woman, and American Idol child in their place. When this woman called for blues, it was a mystery the very bricks of Sangria’s wall did not topple in around us. Always there to inject their exoticism, Mr. Steve Arnold’s saxophones and clarinet suffused the secret ingredient throughout Midnight Lamp’s multifaceted musical journey. And who would Lamp be without their positive spirit channeling hope and energy through their performance? Front man Jason Flentye took a few solemn minutes to pray with the audience for local resident Sean Elliot, who recently suffered a tragic motorcycle accident in Redondo Beach. He then guided the band into the Midnight Lamp original “Lord Save My Soul.”

Lamp’s rocking performance was a refreshing and fun way to revere Irish culture on our most secular of Catholic holy days. If you found yourself slurping car bombs and pounding green beers elsewhere on St. Pat’s, you may be happy to know that Midnight Lamp will be performing two shows at Cafe Boogaloo – Mar. 31, and April 14.

In a new Cafe Boogaloo, where mini skirts and Vidal Sassoon laden servers wear curly, clear ear pieces, 12 plasma screens obstruct artwork and play sports during live music, a three-piece mirror covers the chalk board that once stated ‘No Mustang Sally, No Cell Phones,’ and the sound board is in desperate need of Ian’s understanding touch, where cafe has mutated into pseudo club, the International Farmers reminded us Sunday night that our former music sanctuary is still bringing some great shows.

The Farmers were even able to flow and power through muddy sound. (Boog is known for close quarters and fantastic acoustics, but when the soundman has everyone on stage cranked to max, while he prepares his itunes top ten hits to play in between sets, we get some down-home Mississippi mud sludging through our Louisiana parlor.) Undulating bodies and slithering feet slid across the dance floor. The band had the audience lost in a hazy trance of dance, skip, and trip. Trumpet and keys played off each other while a fluid partnership of male and female vocals transitioned in and out of the music like instruments. It was easy to be overtaken and whisked away by the progressive reggae emanating from the speakers.

With the advent of their second album this summer, the South Bay’s International Farmers have been manifesting new musical visions on stage. These explorations appeared to bring a more progressive reggae Sunday night. By progressive I do not mean aggressive; rather, containing transitions, segues, trip outs, and fusions. There was even a new song I suggested sounded like disco-dance-progressive-reggae. With slowly shaking heads and squinting eyes, Travis Walpole (of local reggae legends, Fortunate Youth) and I concurred that we both liked it. It will be interesting to see where Daniel Primavera’s writing takes the International Farmers, and what new sounds they will continue to harvest.

For continued coverage of South Bay’s music scene, stay tuned to Dirty Hippie Radio. It doesn’t look like the International Farmers will be playing locally again ’til summer, but in the meantime check them (and Midnight Lamp) out on www.DirtyHippieRadio.com (Internet radio for independent music). Listen, learn, read on…