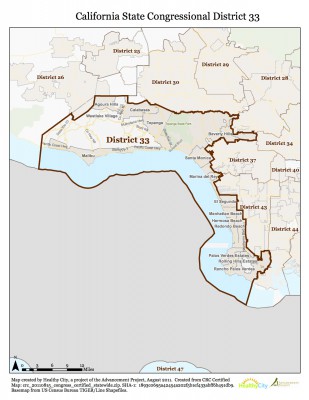 Regardless of the outcome of Tuesday’s primary election for the 33rd Congressional District, the political landscape of the South Bay has already drastically changed.

The pressing question in this election may have less to do with who will win – an upset of 19-term incumbent Democrat Henry Waxman, who enjoys a 16 percent party registration advantage, would be historic – but rather whether or not the South Bay has in a sense lost representation.

The new district was singled out and dubbed “the ribbon of shame” by the lone dissenting member of the California Citizens Redistricting Commission, Michael Ward, who accused the commission of playing politics in an effort that was supposed to remove political considerations from the equation.

“This is the ribbon of shame,” said Bob Holmes, a local GOP party leader and former Manhattan Beach mayor and councilman. “It connects two sides of a barbell – or perhaps the more appropriate word is dumbbell – by a strip of land at Dockweiller Beach. It’s not particularly good for the northern part, and certainly not good for the southern part. It is widely divergent in terms of economic interests, cultural interests – just everything.”

Locally-based political pollster Steve Kinney said the redistricting was done largely on racial and socioeconomic considerations, with the idea being that the long strip of coastal communities had two things in common: they are mostly white, and mostly wealthy. Kinney argued it ignores vast differences in cultures and political interests of the areas included in the new district.

“Ask yourself: how much do you feel we in the South Bay…are like Malibu, Santa Monica, and Beverly Hills?” Kinney said. “Maybe they can say the Hill has some relation, but it’s a really weird design.”

An indication of how much things have changed is that the presumed frontrunner – Democrat Henry Waxman, who has served 37 years in Congress – has yet to make a campaign visit to the South Bay. Waxman, 72, who lives in Beverly Hills, has been very straightforward about his reason for not visiting: he doesn’t need to in order to win the primary. His political and financial base has long been Beverly Hills and its more immediate environs.

Waxman acknowledged that this isn’t the district he would have drawn but expressed confidence in his ability to represent it. “I think it’s a terrific district, though may not have been exactly the way I would’ve drafted it,” he said in an interview last week. “I think it’s a district I can represent well.”

Local elected officials had become accustomed to a close relationship with former Congresswoman Jane Harman, who was elected to nine terms and resigned a year ago February to head a Washington D.C. think-tank. Harman was known for her highly effective advocacy on behalf of the local aerospace industry, as well as for her ability to deliver federal dollars for local projects.

Redondo Beach City Councilman Steve Aspel, for example, gave Harman credit for helping find a significant chunk of the funds for the $2.9 million remaking of the city’s signature street, The Esplanade.

“We need access,” Aspel said. “And Jane Harman was a personal friend, so she really took care of us. And she was a personal friend to a lot of people in Redondo Beach, so that gave us the ability to get money for The Esplanade. Henry Waxman will be a challenge; we don’t really matter to his congressional district. We don’t affect if he gets reelected or not.”

Aspel met with Waxman in Washington D.C. last month and said that the Congressman was honest about knowing very little about the area.

“I’ll give him the benefit of the doubt,” Aspel said. “He was a really nice guy, he took the time to meet with us and talk. He said he’d make a point to get down here. So let’s see what happens. But the bottom line is no one is going to replace Jane Harman.”

Hermosa Beach Councilman Michael DiVirgilio worked on Harman’s staff for more than four years, first as a field deputy, then as district manager, and said that the combination of her loss and the new district’s geographic challenges is concerning.

“It’s a very long narrow district that ends up cutting across different issues that are important in one of the district’s areas but not even on the radar in another area,” he said. “In that sense, there is a possibility we will see less coverage. One issue that really speaks to that is aerospace – not exclusively, but the 36th district is very significantly situated around the aerospace industry. We will now be sharing priorities, or at least be competing, with other sections of Los Angeles that have other priorities. This primary issue in the South Bay was not only Jane Harman’s strength but also her passion. I think simply her departure, as well as the changed demographic, could potentially mean aerospace gets less attention, and that would be unfortunate.”

DiVirgilio said that the new district does offer an advantage in that “everyone will be on the same page” regarding coastal issues, and that Waxman’s likely election would give the area a powerful representative.

“On the flip side, the possibility of having someone of Henry Waxman’s stature, and his leadership role in the house, to be our representative is certainly helpful…That may balance things out if in fact he is the one elected,” DiVirgilio said.

One manner in which the new district does not significantly differ is in party registration. Democrats held an 18 percent edge over Republicans in the last election – when Democrat Janice Hahn was elected to serve the remainder of Harman’s term – and now hold a 16 percent edge.

But Holmes said these numbers mask the deeper cultural differences between the north and south parts of the district.

“This part of the district is aerospace and manufacturing, and up there is much more entertainment-oriented, and so just culturally…There is no correlation between this southern part and the northern part,” Holmes said. “I’m not saying one is good and one is bad, it’s just sugar and spice, or bitter and sweet – just two market contrasts in demographics, industries, economic interests, everything.”

Former Redondo Beach Councilman John Parsons, who helped lead the coalition that saved El Segundo’s Los Angeles Air Force Base from closure, acknowledged that Harman was a key component of that success. But he said the South Bay would just have to strategize differently as the next round of potential base closures approaches.

“We had Harman, who lived and breathed technology, aerospace, defense, and intelligence,” Parsons said. “Now we don’t have that, so we have to create a new approach. And we have started that outreach and are going to build on it.”

DiVirgilio said a positive aspect of the redistricting is that it will almost force South Bay communities to work more closely together.

“The South Bay communities within LA politics are sort of a quieter bunch of cities, by virtue of not being LA,” he said. “As Hermosa Beach officials, and my colleagues in Manhattan Beach, Redondo Beach, and Torrance, we will need to work together to make sure the issues we see here are not overshadowed by the issues of Santa Monica or LA. And that’s probably a good thing.”