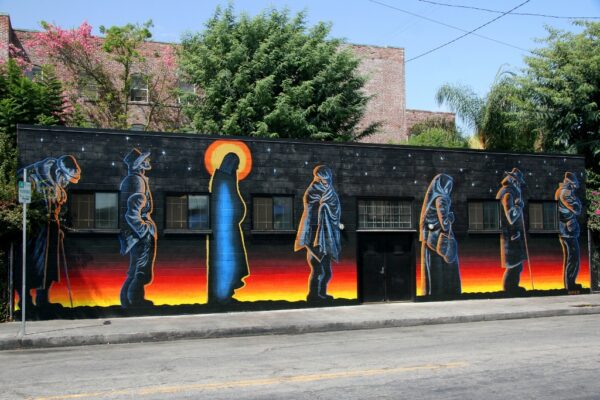 Almost daily for the past four decades, Jeff Dietrich has been in jail or feeding upwards of 1,000 people at the Catholic Worker Kitchen at 6th Street and Gladys Avenue in downtown Los Angeles.

The IRS has long since given up threatening to jail Dietrich for failing to pay taxes. Dietrich never pleads innocent nor asks for mercy during sentencing after being arrested for civil disobedience.

He knows that he will sleep peacefully in jail and his prosecutor, judge and jury won’t.

Dietrich’s sister Anne Smet is a member of American Martyrs Catholic Church in Manhattan Beach, whose parishioners and pastor Monsignor John Barry have been longtime supporters of the Los Angeles Catholic Worker. 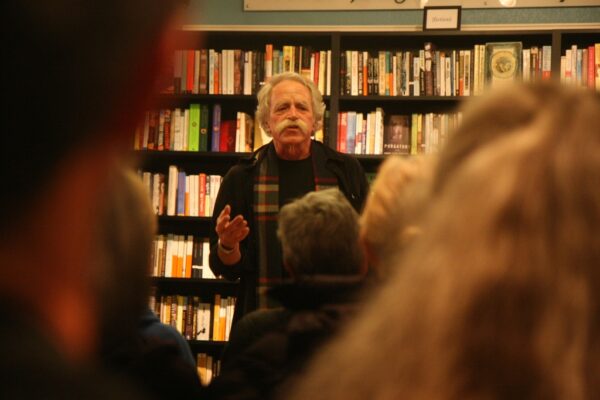 Jeff Dietrich during a December, 2012 reading from Broken and Shared at Pages Bookstore. Photo by Kevin Cody

Dietrich hopes to stir a few sleepless nights in his family’s hometown with a reading from his latest book The Good Samaritan: Stories from the Los Angeles Catholic Worker on Skid Row Thursday night, September 10, at Pages Bookstore.

Dietrich’s protest targets aren’t always as predictable as the Vandenberg Air Force Base near Oxnard, where he and four fellow Catholic Workers and a Veteran for Peace were arrested August 8 during a vigil commemorating the 70th anniversary of the bombings of Hiroshima and Nagasaki.

“[Catholic Worker founder Dorothy Day] called the atomic bombings of Nagasaki and Hiroshima the triumph of the spirit of Nazism,” he writes with the bomb-throwing rhetoric that makes his righteous readers squirm. 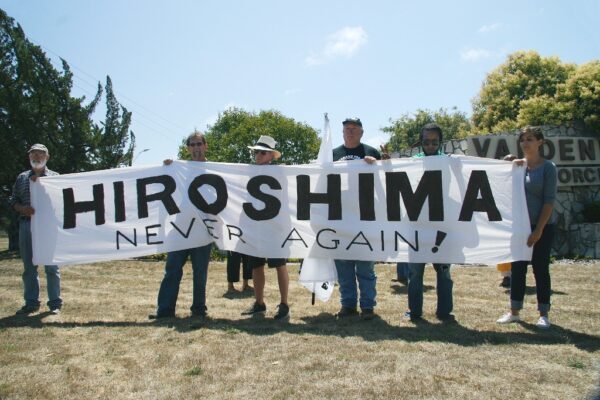 At the October, 1998 groundbreaking for the $190 million Cathedral of Our Lady of the Angels, Catholic Workers led by Dietrich chained themselves to the bulldozers.

But unlike Gandhi and King, for whom civil disobedience were realistic tactics for awakening their oppressors’ consciences, Dietrich’s civil disobedience is Quixotic. It almost always passes unheralded, except for a small number of courtroom witnesses.

Why he perseveres and why he remains a devoted Catholic when he largely loathes the institutional Church is only hinted at in The Good Samaritan.

Nowhere in The Good Samaritan does he suggests he struggles any less with faith than anyone else.

For order in his community, he turns to the sixth century Rules of St. Benedict. “Not only do we serve the poor and offer hospitality to the homeless on a daily basis, but we also pray together at least three times a day and our whole communal life is consciously organized around the Benedictine discipline of work and prayer. Often we pray the rosary, sing the Latin chants and I personally have a deep devotion the the Virgin Mary,” he writes.

For moral order Dietrich looks back even further.

“But finally, [we are] grounded in the Gospels and Jesus Christ, who violated every civil and religious code of his day and ended his life crucified between two revolutionaries.” 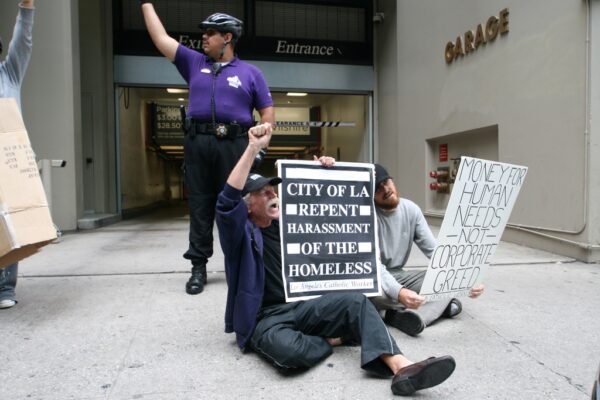 Dietrich describes his work as “prophetic witness” where hope has been abandoned, from Skid Row to corporate America. His stories are like tiny puffs on dying embers whose incandescence is hopeful and hopelessly brief.

Jeff Dietrich will read from and sign The Good Samaritan: Stories from the Los Angeles Catholic Worker on Skid Row at 7 p.m. on Thursday, September 10 at Pages Bookstore, 904 Manhattan Avenue, Manhattan Beach. For more information visit LACatholic Worker.org or  PagesABookstore.com.