A Palos Verdes father and son team serve the U.S. military with their meticulous–and discreet–inventions 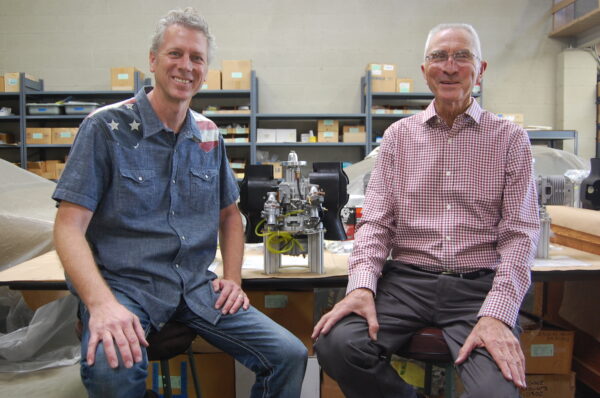 Dean and Dale Herbrandson in their workspace in Lawndale. Photos by Esther Kang

No signage offers any clues about the nature of the business that takes place inside the beige-bricked building tucked across the street from Lawndale High School. For the Herbrandsons, who have occupied the space since 1974, discretion is key. Understandably, there comes a concerned deputy sheriff who knocks on the door seeking answers every now and then.

“I tell them we do three things: duty, honor and country,” Dale Herbrandson, 77, says gleefully. “Then they understand what I’m talking about. They come in and are relieved we’re not doing narcotics or something.”

Inside the 1,500 sq. ft. building are assembly lines of state-of-the-art engines — both new and used — for unmanned aerial vehicles (UAV), or drones. And not just any drones, but combat drones. Over the last 10 years, Herbrandson Engines Inc.’s sole client has been the U.S. military, supplying its signature engines for the military’s TigerShark aircrafts. Due to the sensitivity of the missions, not much more information could be shared.

“Not even our neighbors know what we do,” adds Dean Herbrandson, Dale’s 50-year-old son who has taken the helm of the business over the last several years.

The Herbrandsons, who live in Palos Verdes, are recognized worldwide in their field for their compact and seamlessly powerful engine models. One engine on average takes nine months of meticulous manufacturing from conception to finish between their three-person team — Dale, Dean and Dale’s younger brother Richard. Dale’s wife Charlotte, who founded the company, also played an elemental part in the family business before she passed away from cancer two years ago.

Several of Herbrandson state-of-the-art engines have been displayed in museums, including the Smithsonian Institute, which featured a particular four-cylindar UAV engine for an exhibit called “Form Follows Function.” These engines on average cost 10 times as much as a commercial engine, Dean notes.

So how does a family get into this line of business?

Dale’s obsession with mechanics began at an early age. Born in Minnesota during the Great Depression, Dale and his family relocated to Los Angeles when he was still a toddler. In his teenage years, the self-taught engineer made an income by fixing up broken Whizzer motorbikes that his neighbors had neglected and reselling them.

“I was trying any way to make some money other than by pushing a lawn mower,” he recalls. 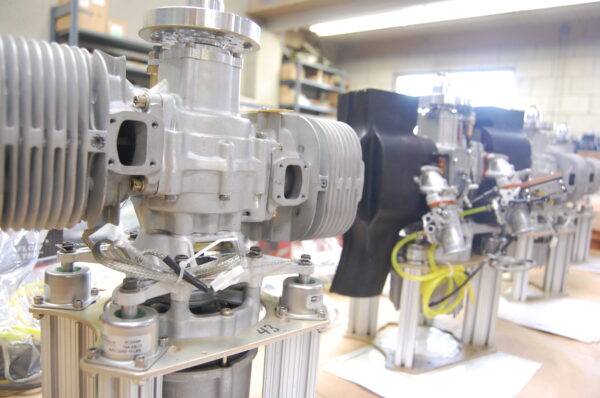 Driven by a widespread affinity for drag racing at the time, the shy teenager also fixed up cars, installing hydraulic brakes in his friends’ old Fords as well as his own. He owned two cars in those days, one of which was a ’32 Ford he purchased for $50. He still has it today, he notes proudly.

“I wasn’t really confident about myself when I was young,” Dale says, “but when I’m with an engine, I’m in charge. That’s what I liked. When you like something, you pursue it until you’ve conquered it. I didn’t swim, I didn’t travel, I raced cars.”

Dale, who graduated from Leuzinger High School, met his wife Charlotte, a Hawthorne High graduate, at a ballroom dancing event in Lennox — he says it was love at first sight. He was 19, and she was 18. Just a few weeks after their wedding, he was drafted to the army and stationed at Fort Sill in Oklahoma. There he worked on classified rocket systems, thanks to his secret clearance from working a stint after high school at Douglas Aircraft Missile Systems.

After the military, Dale earned a bachelor’s in mechanical engineering from Cal Poly San Luis Obispo and proceeded to earn a master’s degree from USC. The family, with their newborn Dean in tow, settled in Manhattan Beach, where they turned the two-car garage into a machine shop or a laboratory of sorts.

It was there in the early 70s that Dale invented the Reed Valve Intake System, a two-stroke engine with unprecedented power that has since become a standard in motocross bikes. Their backyard was always lined with dirt bikes sent from manufacturers who wanted his invention on their product.

“Motorcycle companies would call and say, ‘Tell me about your invention,’” Dale remembers. “… We should’ve put a US patent on it. I’m just an engineer.”

Growing up surrounded by drag racing and motorbikes, Dean was naturally fascinated by his father’s world. He was just 5 years old when he rode his first mini-motorized bike. After graduating from Mira Costa High School, he attended El Camino College full-time to study mathematics while simultaneously working for his parents as the “low man on the totem pole” running all kinds of interesting errands.

“It was fascinating,” recalls Dean, who proceeded to earn a B.S. in mechanical engineering at his father’s alma mater, Cal Poly San Luis Obispo. “Here I am a high school graduate wanting to do engineering and I get to go to all these manufacturing shops and laboratories. It made me wanna keep getting deeper and deeper.”

Herbrandson’s first national client was the Israeli Defense Forces. An article for Sports Aviation written by Dale and Charlotte detailing a new engine he invented caught the attention of the U.S. Army, who awarded a contract for Herbrandson Engine Co. to build these engines for its pioneering Aquila aircraft. Business boomed from the 80s up to about 10 years ago, with the country bulking up defense for a potential World War III. At the height of it all, the company employed 14 people with six outside consultants.

“Everything is the best of the best because when you’re working on a weapon system, there’s infinite money,” Dale says. “What we don’t have is time. It’s a funny expression, you get threatened with money. But that’s really how it was.”

Then with the sequestration budget cuts, business slowed. “Everything just went quiet,” Dean remembers. Over the last decade, they’ve brought the workforce down to the core — the family members — and are serving their sole client in the U.S. military.

There are two more engineers in the family, up and coming in their own right. Dean, whose wife Kara is a longtime teacher at Hermosa Valley Intermediate School, has two sons, Brett, 19, and Erik, 15. Brett is studying mechanical engineering at the country’s first engineering campus in Hoboken, New Jersey. Erik, a sophomore at Palos Verdes High School, collects dirt bikes and makes a hobby out of fixing up old mountain bikes and selling high.

“He makes more money doing this than he could working for me at Herbrandson,” Dean says with a laugh.