Dusty Rhodes and the River Band at Brixton 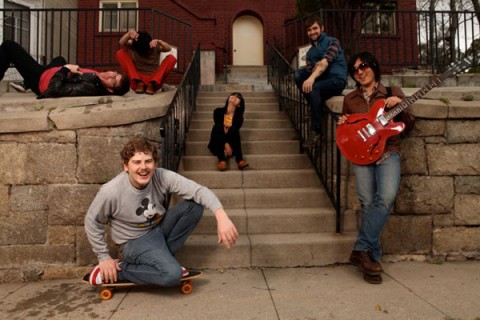 You can picture Dustin Apodaca, his wild mop of curls flopping in the wind, crossing an intersection on his way to work at Disneyland. He’s riding a Honda Elite scooter he’d bought with his high school graduation money, as wild and free as a boy can be in Anaheim, California, circa 2002. But then non-tragedy strikes: a car runs the light and plows into young Apodaca, whose helmeted head hits the car hard enough to leave an indentation.

Here’s the twist, though: Apodaca wasn’t hurt, hardly at all. But he emerged from the accident minus his job after Disneyland fired him for his no-show (“I didn’t get hurt but I still wanted two days off work…So they fired me,” Apodaca recalled. “Well, I quit.”) and with superpowers. That is, he took the small insurance settlement and bought every instrument he could get his hands on, a wild assortment that included multiple keyboards (including his beloved synthesizer) an accordion, and even a mini-van.

“I got me like two amps,” he said. “I had shit before that. I had no equipment.”

Thus was born Dusty Rhodes. Like Superman coming out of the phone booth – though Apodaca tends to favor frilly polyester jumpsuits over a cape – a musical superhero suddenly appeared on the scene.

It was around this time that the others began to appear. Apodaca knew guitarist Kyle Divine, and then met another guitarist, Edson Choi, at a jam. Choi remembers a curly-headed kid about a foot shorter than he is now who possessed an almost unstoppable musical effervescence.

“You don’t know if this guy is for real or what,” Choi said. “But you know the thing is he is totally ridiculous but he’s totally genuine, too. He’s kind of one of those characters.”

Soon the band had congregated, rounding out into a sextet with the addition of Andrea Babinski on violin, her brother Brad on bass, and Eric Chirco on drums. They crawled into a Chevy Astro van and hit the road, touring all over the country with bands including Flogging Molly, Blind Melon, and Dirty Pretty Things and producing what can best be described as a profusion of rock n’ roll musicality.

Harp magazine aptly described the band in 2008: “Utilizing a swaggering campfire sing-along ethic, they channel the indie folk spirit of Camper Van Beethoven, the boozy Celtic swing of the Pogues, the proggy pop bombast of Procol Harum and the punkish abandon of the Replacements, all while choreographing ’60s AM pop and inking in flannel sleeve tattoos of traditional country, British folk and bluegrass. Dusty Rhodes and the River Band thrum with schizophrenic charm.”

You might want to throw some Meatloaf in there for good measure. But if you are going to talk influences, it goes back to two formative moments for Apodaca: beholding The Band’s “Last Waltz” and witnessing Yes’s Rick Wakeman do his synthesizer thing. It’s an odd combination, but it fits under the description rock critic Greil Marcus once gave to The Band’s freaky 1930s folk influences: “old, weird America.” Apodaca sings of Branch Davidians, the ballad of Jim Jones, lepers without penicillin, and the tragic undersupply of Lucky Lager in modern times.

Dusty Rhodes and the River Band, in other words, is young, weird America, and they groove like few bands you’ll witness. The band, which will release its third album this month, has long been considered one of top bands out of Orange County, winning numerous “best of” awards in the area, and seems poised for a national breakthrough. Apodaca’s throaty yowl – which makes King of Leon’s Caleb Fallowel’s voice seems a tad thin by comparison – is bound to get around.

And when it does, he knows exactly what he’ll be wearing.

“Man, I love polyester and fringes,” he said. “I love how it makes your body feel like it’s moving more than you are moving…I just can’t stop. God, I love those things.”

Dusty Rhodes and the River Band play Brixton Sunday night on a bill with the Mother Hips. See brixtonsouthbay.com for ticket info, myspace.com/dustyrhodes for music samples, and easyreadernews.com for an expanded version of this story. ER