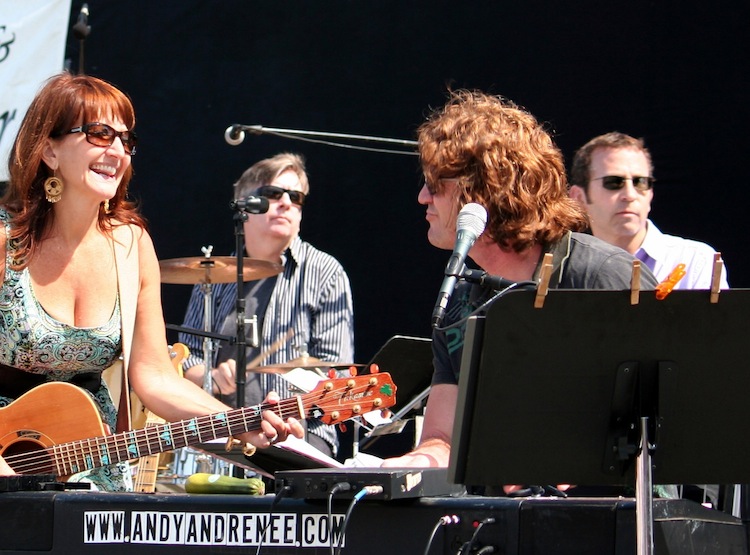 Andy and Renee host the 23rd Annual Dylanfest May 5 at the Torrance Cultural Arts Center. 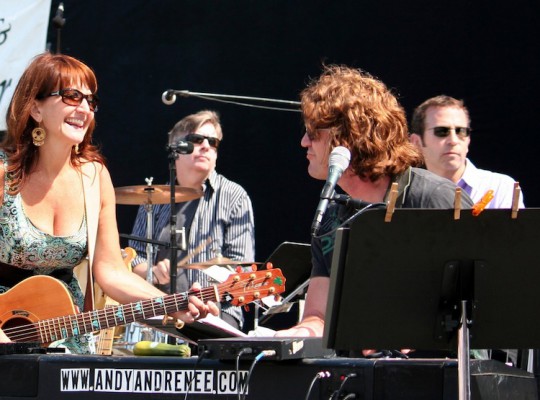 Andy and Renee host the 23rd Annual Dylanfest May 5 at the Torrance Cultural Arts Center.

You would think they are married. They finish each other’s sentences, make endearing jabs at one another, and have been the faces behind the popular local Bob Dylan tribute Dylanfest for 23 years.

And while they did date briefly, Andy Hill and Renée Safier are now simply dear friends who enjoy making music together and share a love for Bob Dylan.

They met at the University of Denver. Hill was on a hockey scholarship and Safier was on an academic scholarship. Hockey kept Hill busy and Safier was busy playing in an acoustic trio and had been warned to stay away from members of the hockey team.

“They’ll drag you into their bands for the rest of your life,” Hill joked.

They didn’t meet until senior year, when Hill’s then-girlfriend brought him to see Safier’s band.

Hill started playing drums for the trio when they decided to go electric. Casual concerts the band dubbed “Towers Jams” after the name of their college dorm were their first experiences playing out together.

“We put on these all-day concerts, so I guess [the concept for Dylanfest] kind of started there,” Safier said.

After graduation, Hill went back to his hometown of Vancouver and Safier stayed in Denver. But they stayed in touch through the mail.

In the summer of 1985, Hill visited a friend in Los Angeles with the idea of moving there.

“The guy I was staying with was a University of Denver graduate and asked me whatever happened to Renée,” Hill said. “So we called her up and she was leaving the next day to go to Los Angeles for her father’s 50th birthday.”

Safier called Hill once she arrived in L.A and discovered, of all the places she could have been staying in the city, that she was a block away from him.

Within a few months they both moved to Los Angeles and by 1986 they were playing together. They are both multi-instrumental. Hill plays the drums and guitar. Safier plays guitar and keyboard.

For Hill, the idea of Dylanfest, an all-day concert of Bob Dylan songs, from the very popular to the extremely obscure, was befitting.

“I had sung a lot of his songs but wasn’t the biggest fan of his voice,” Safier said.

It is a common complaint. And while Renée has come to appreciate Bob’s voice, many who don’t still can marvel at the wonder that is his body of work.

It is hard to imagine any other songwriter whose oeuvre is vast and celebrated enough to inspire an eight-hour concert of cover songs. Part of the appeal may be that Dylan’s music is as intricate in narrative as it is simple in arrangement, lending itself not only to ease of play but also to original interpretations of familiar lyrics.

Dylan balances the light with the heavy. In his most recent album, 2012’s Tempest, the quick rockabilly love tune “Duquesne Whistle” feels as appropriate as the album’s title track, a sprawling 14-minute meditation on the sinking of the Titanic.

Dylanfest strives for this balance as well, tempering anti-war anthems with sunnier tunes. After all, Dylan could write “Just then the whole kitchen exploded/From boilin’ fat/Food was flying everywhere/And I left without my hat” on the same album as “While preachers preach of evil fates/Teachers teach that knowledge waits/Can lead to hundred-dollar plates/Goodness hides behind its gates/But even the president of the United States/Sometimes must have to stand naked.”

One real challenge in doing Dylan’s music justice is simply mastering the lyrics.

“My first job in L.A. was installing alarm systems,” Hill said. “So I spent a lot of time dragging wires in attics and underground. I had my big Bob Dylan book in my van and that’s how I memorized all these songs. I would look at a verse, get it in my head and, when I’d go back and crawl under the house, for 15 or 20 minutes I’d run it through my head. By the end of an eight-hour day, if you stayed focused, you could memorize a long song that way.”

Memorizing all of those beautifully meandering lyrics has proven useful for him in the eight-hour Dylanfest concerts in which Hill, Safier and their six-piece band Hard Rain cover more than 60 Dylan songs. Their only rule is no repeats.

The first Dylanfest was held at the Hermosa Saloon in 1990 and came about thanks to a fellow Dylanphile who hosted an inventive party on the other coast.

“We read some liner notes, in Dylan’s five-part retrospective biography, by Cameron Crowe,” Hill said. “In those notes he referenced someone in New York who had a party where everyone came as a character from a Bob Dylan song. So there were tambourine men and men dressed just like a woman, that kind of stuff.”

Hill and Safier loved the idea.

“And we could do it better because we’re a band,” he said. “This was just some guy who had a genius idea but he didn’t know how to play.”

The first Dylanfest was four hours and Hill and Safier didn’t intend it to become an annual event. But it was incredibly fun for them. They followed the New Yorker’s lead and dressed in costumes.

“I was the Jack of Hearts,” Hill said. “And Renée was the philandering heroine of “Leopard-Skin Pill Box Hat.”

The following year was more of an impromptu show in Safier’s backyard in Redondo. But after that, they made it official, and for many years after Dylanfest was held in Hill’s backyard in Torrance.

“And then it got a little bigger so we moved it to Anthony’s in El Segundo for seven years,” Hill said. “After they closed down, we started doing it in parks wherever we could. And for the last four years we’ve been at St. Anthony School in El Segundo.”

This year, the 23rd Annual Dylan Fest will be at the Torrance Cultural Arts Center on May 5.

And concert-goers sometimes still dress in costumes, challenging even the most avid fans to guess their obscure song references.

In the early years of Dylanfest, many spectators would get up and join the band for a song or two. For fifteen years there was no set list. Now that their is an entry fee for the event, Hill and Safier make sure only professional musicians perform and there is a schedule.

And there is no lack of professional musicians appearing at Dylanfest this year. Marty Rifkin, who has toured with Bruce Springsteen and played on Elton John albums, joins the band this year.

“He won country instrumentalist of the year in Los Angeles about 25 years in a row until he finally withdrew his name from the running,” Hill said.

Rifkin produced Hill and Safier’s most recent album, “Many Miles to Go.”

Chris Shiflett, guitarist for the Foo Fighters, will also join the line-up this year with his side project Dead Peasants. The festival will also feature a 13-year-old singing prodigy Veronica Pickard.

“That, for me, will define that song forever,” Hill said.

“The thing I see every year that really gets me,” Safier said, “is the number of people singing along to almost every song. And just the look of pure joy on their faces.”