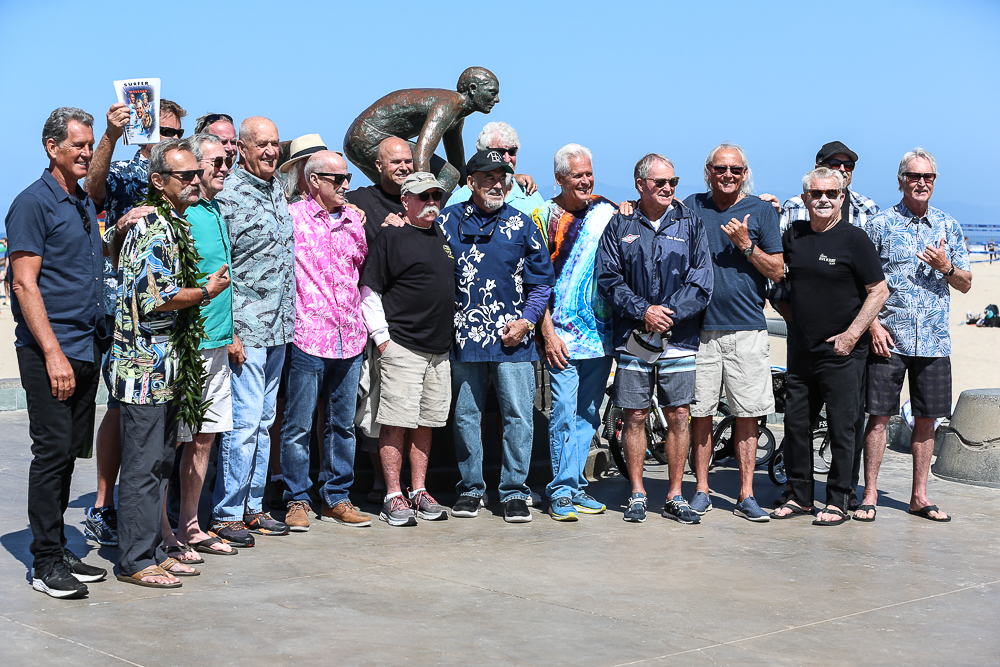 Two years after being named to the Hermosa Beach Surfer Walk of Fame, the 2020 inductees finally received their bronze plaques on Saturday during a post pandemic ceremony on Pier Plaza.

None of the four nominees earned lasting fame. Their stories might have been lost if not for the plaques that will be placed on the Hermosa Beach pier. But in their day, each was among the world’s best surfers, and in the years that followed each responded to personal challenges that showed them to be champions out of the water, as well. 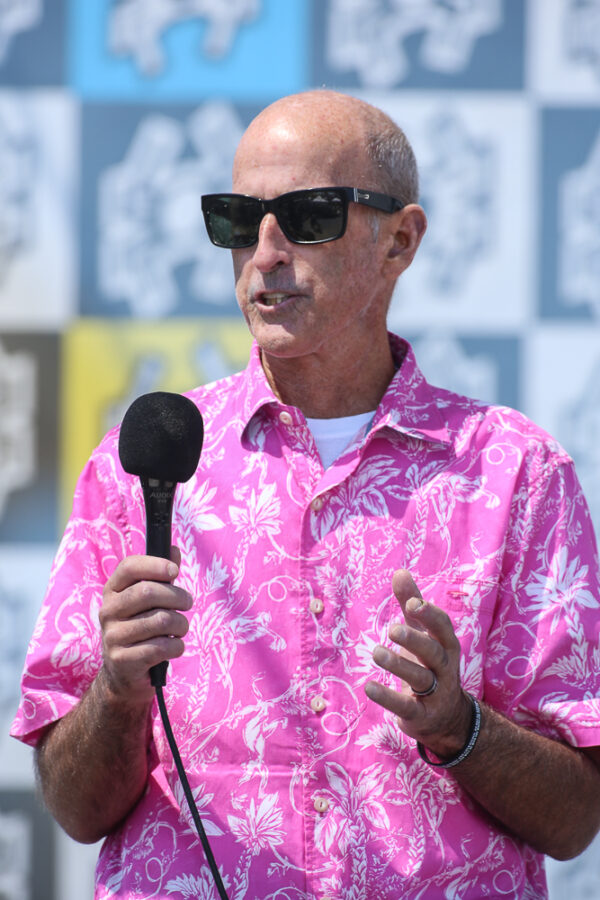 Inductee Nick Christensen was ranked a respectable 44th on the pro tour in the mid-80s when he made the decision to enroll at UCLA. There he met Sean Collins, a fellow surfer obsessed with wave forecasting. On a surf trip to Baja, Mexico, Collins proposed a 976-SURF forecasting service. The venture evolved into Surfline.com, now relied upon by weekend surfers and big wave hunters worldwide.

Christensen recalled the surf service’s early days when he and Collins used early morning pay phone calls to surfers up and down the coast to gather information for the daily. 7:30 a.m. surf report.

“One day Sean  said to me, I want to put cameras up and down the coast, and stream video of the surf over the internet. I told him ‘No, no. We need more pay phones. That internet thing will never last.’”

After praising Collins for his foresight, and lamenting the passing of his friend 10 years ago, Christensen reflected on his own mortality.

“246 days ago, I was diagnosed with stage 3 lung cancer, and, a week later, throat cancer. 118 days ago, I had half of a lung removed, and six weeks ago my neck was opened up.

Then he commented on what the induction meant to him.

“I’m telling you, I’m a blessed man. And I’ll tell you something else. I will always be a surfer,” he said. 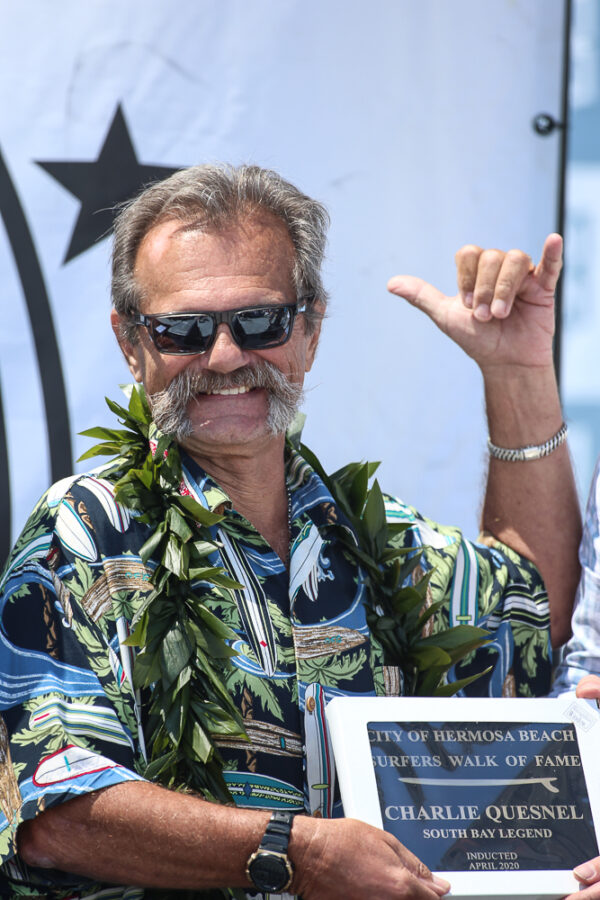 Inductee Charlie Quesnel began his remarks by observing there were people, himself included, who didn’t think he’d live long enough to accept a Walk of Fame plaque. While a student at Mira Costa High School, his mother allowed him to go to Hawaii, as a member of the Bing surf team, to compete in the winter contest, so long as he kept his grades up. Following high school, he moved to Hawaii, and hit some rough road. Bing Copeland welcomed him back to  Hermosa, and helped him begin building Charlie Q Surfboards, down the street from Bing’s own factory, on Cypress Avenue.

Over the past 20 years, Quesnel has worked to protect Maui’s coral reefs as a Surfrider board board member, and fought climate change as the sales manager of Maui Pacific Solar.

On the evening of his induction, the 73-year-old Quesnel and his wife Sharon boarded a flight, out of LAX, to Java, to surf G-land, one of the world’s most challenging waves. 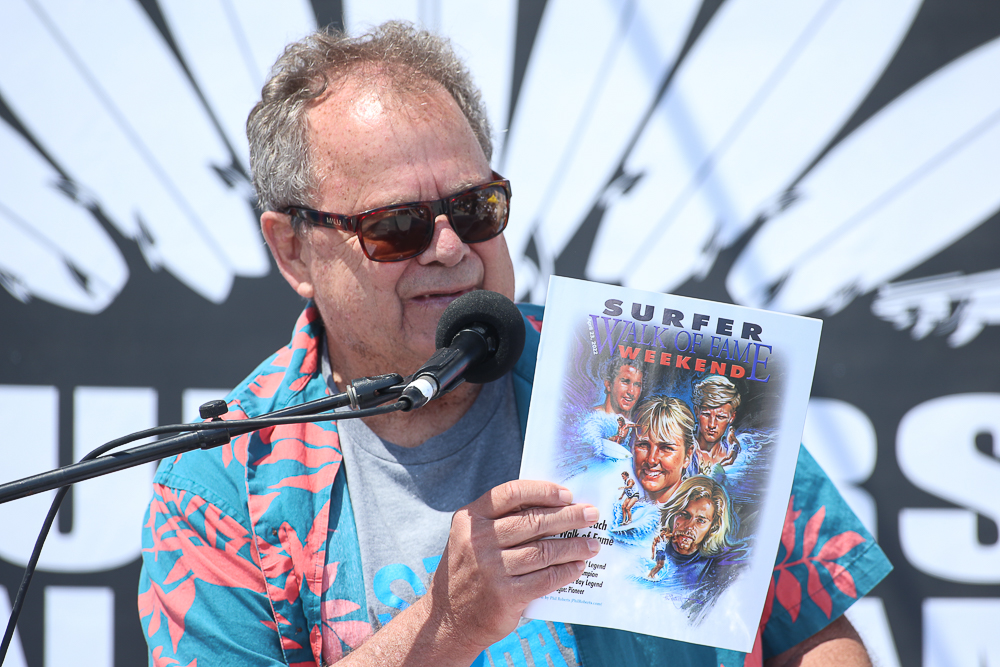 Lagadere grew up in Redondo Beach and competed on the Bay Cities Surf Club, and Dewey Weber teams. She entered her first contest when she was 16. That year, she entered the Santa Monica Mid-Winter Championships and won the women’s division. Three years later, she defeated two-time World Champion Joyce Hoffman at the Laguna Swimwear Masters, held at the Redondo Breakwall, and aired on ABC’s Wide World of Sports. 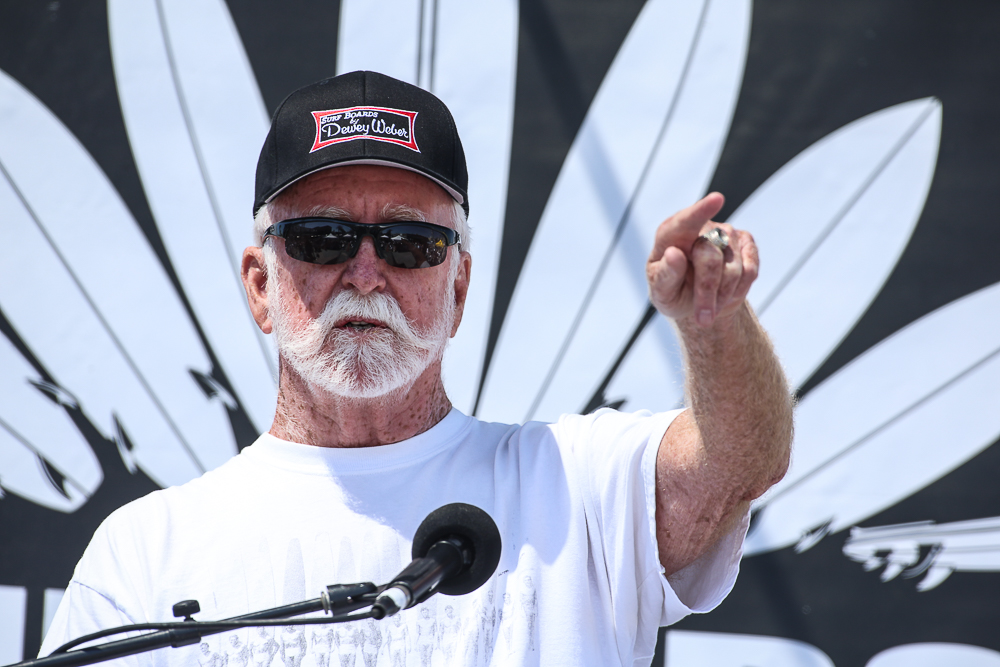 At the 1969 World Surfing Championships in San Diego, where she placed fifth, she was invited by Australian World Champion Phyllis O’Donel to visit Queensland. The following year Lagardere won the Queensland State Championship, and the Australian National Championship.

Lagadere was unable to attend Saturday’s induction because O’Donel is ill and Lagadere is her caretaker. 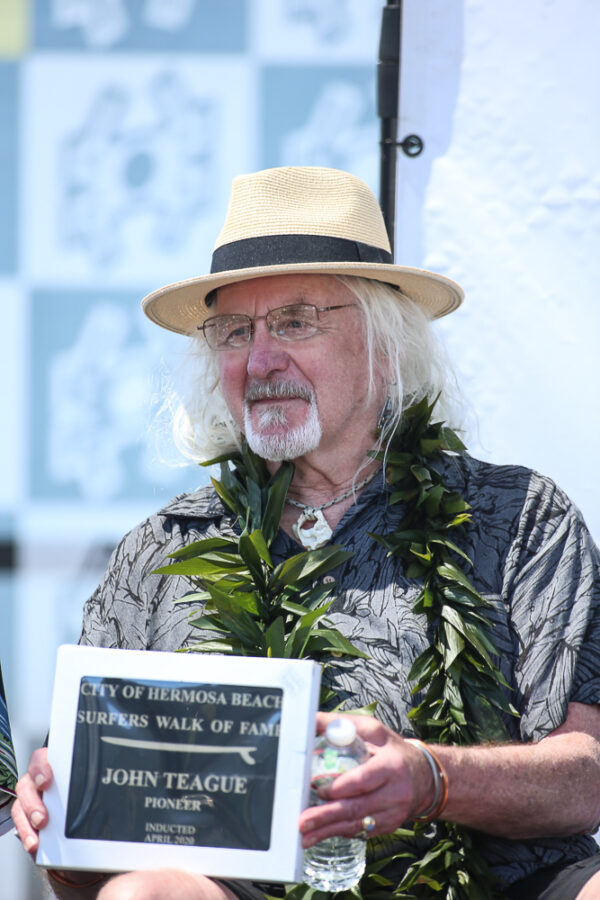 Inductee John Teague’s family moved to Hermosa Beach in 1958 when he was 13. In his remarks Saturday morning, he credited his surfing success to the two years he rented surf mats from Juicy James on The Strand.

In his first contest, the U.S. Championships at Huntington Beach, he beat three time world champion Corky Caroll in his first heat, and went on to finish third.

“John was the guy whose name you didn’t want to see on your heat sheet,” recalled John Joseph, who introduced Teague, and is himself a Walk of Fame inductee.

Teague’s competitive career ended after his wife died in a car accident and he became a single parent to two children.

Teague became an electrician, and in retirement has become a respected artist painter, whose signature style is reverse painting on salvaged windows.

Teague recalled fond memories of surfing up and down the coast during the summer and winters on the North Shore of Hawaii. But his favorite memories, he said, are of the people he surfed with “who were having the most fun, besides me.” ER