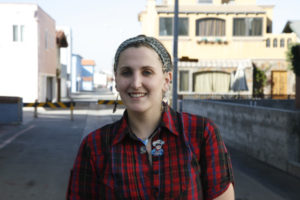 “My main dream,” says Sasha Marie Barnard, “is to do a series of public art installations across the United States and worldwide. I want to start doing some public art; I really believe that the South Bay could use a little more public art. A lot of places could use more public art.”

Barnard, perhaps best described as a media sculptor, is in her latter 20s. On Saturday, her fine art and sculpture will be on view from 7 until 11 p.m. at the Beach Cities Masonic Lodge in Manhattan Beach. “Pillars of Inspiration” is not only a one-woman art show, it’s a charity benefit for the Shriners Hospitals for Children. 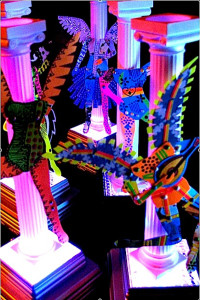 “My brother and dad are both members of the Beach Cities Masonic Lodge,” she tells me when I ask Barnard how the exhibition came about. During one of the dinners that are held each month, one of the officers told her that he remembered hearing about her work. They were going to have another fundraiser and benefit for the hospital and he asked if he could visit her studio.

“That sounded great to me,” Barnard says. “He came over and I showed him a bunch of my art and we decided what kind of collections he thought would be appropriate for the show. I was really interested in the charity part of it, and that is the mission of the Masons and the Shriners, to do charity work and to help people who are less fortunate. I’ve been doing community stuff like that my whole life.”

With a benefit show – and especially one for a children’s hospital – I guess you have to be careful what you put on display, as opposed to someplace else where you could show things that might, umm, be less cheerful.

“It’s funny you say that,” Barnard replies, “because for two years I’ve been working on a huge project called ‘Mapping the Americans.’ It’s a 22-foot-long by 14-foot map of the United States and I had made skeletons for each state. The whole idea of the project is to revive some kind of good energy about American culture. Because people are so like, oh, American culture is just hotdogs and hamburgers! It’s so not true; so I want to give that life back to America. It was amazing because I was working on these skeletons” and that’s clearly “not appropriate for a children’s hospital show. 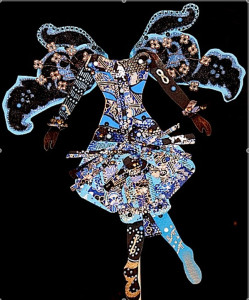 “I’m getting really close to the end,” she continues, “and I just packed everything up and put it all in my storage unit and – boom – started doing this show.” The transition wasn’t easy because Barnard had compiled a lot of information and done so much research, and is hoping to get her master’s degree out of it.

Knowing that she’s been creating skeletons has surprised various people who associate her with angels, the focus of yet another monumental project. “But they’re really kind of one and the same for me,” Barnard explains, “because it’s a celebration of life.” It also leads into an explanation of the track that she’s been on.

From a whisper to a dream

“I have been doing art full time for about five years now,” Barnard says, remembering back to a miserable day in school. She’d been restless, and “I was like, I want to do my art.” She points to a sticker that shows a heavily bejeweled young woman with a Frida Kahlo-like intensity. The night before, she adds, “I had this dream, and she was in my dream. She was showing me this way of creating all these angels, [which] would become a way for me to be an instrument of God’s, or [to help] people [recognize] this positive awareness. 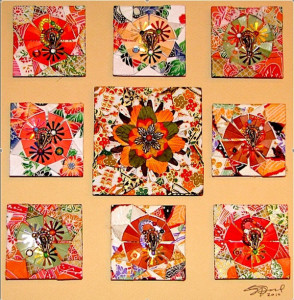 “The very next day I’m sitting in the (science) lab, listening to my horrid teacher, and I flip open a National Geographic. And there she is, right there. I take the page, I ripped it out,” and in no time at all “I was off to the studio. I’ve been creating angels ever since then.”

Another goal for Sasha Marie Barnard: an exhibition to be called “Angels of Reason and Passion.”

It seems that she’s been working on this series intermittently but also consistently. “I wrote them all down after that dream,” Barnard says of her angels. “There’s 48. I think I have close to 27 or 30 of them done. They range in size and media.” A couple of them will be on view this Saturday. As for the exhibition that she’ll devote to them, “it’s gonna have to be in a really large venue.” She figures she needs another two years to complete the work.

As Barnard says in her artist statement, “The shining light of angels empowers me to see revealed mastery in every texture, shape or form that I encounter… God’s light energizes me so that I may inspire others.”

You also wrote a long piece (it’s on her website) called “The Moon Angel.” Tell me about your connection with the Moon and what it means to you, because it seems personal and inspires your art.

“It’s kind of a self-portrait,” Barnard replies. She describes seeing the Moon as “one of those magic moments,” when you’re out walking or driving and you look up and there’s the Moon – just over the horizon or through some branches. “One of the main things it reminds me of [is] my place right here on this Earth… There’s all this mystery about the Moon.”

The Moon, of course, is also the Queen of the Night, and it can be a magical, seductive time for the artist.

“Sometimes I can get more done in two hours in the middle of the night than I will the whole day,” she says, mentioning the daytime disturbances – like gardeners with their leaf-blowers – that can simply blow out one’s focus. But as for the trains passing by, that’s another story. Barnard lives close to the railroad tracks near Carson Street and Crenshaw Boulevard in Torrance.

“I always think of that Paul Simon song (“Trains in the Distance,” on “Heart and Bones”), and I really do love the sound of the train in the distance. The train is the least of my noise problems.”

A train passing in the predawn hours can even emphasize how quiet everything really is.

“The night is more peaceful,” Barnard continues. “It kind of represents the time that I can just be an artist with no distractions. It’s hard to have that time; you really have to fight to have that time.” 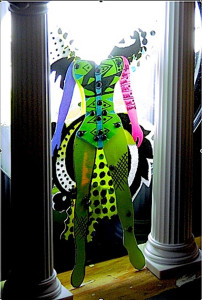 “Train in the Distance,” by Sasha Marie Barnard

On time, under budget

“You’ve spent most of your life in the South Bay?”

“Yeah, my whole life. I graduated from Long Beach State; I did some study abroad, at the University of Vienna in Austria.” Barnard also studied music theory and opera in Salzburg. “At the end of the semester we got to see ‘Carmen’ in the Vienna Opera House, and it was out of this world.”

You studied ballet for many years. It seems that the discipline it needs prepared you for your work in the visual arts.

“I think that it did, sure,” Barnard replies. “It’s very rigid, and my teacher was particularly strict. She just pushed us and pushed us. I ended up hurting myself,” and so that potential career went south.

Later, in private school, “I had some awesome teachers and they were really about self-motivation and discipline.” She mentions her parents, who until the early 1980s owned Paper Moon on Hermosa Avenue in Hermosa Beach. “My family is kind of like that also; we’re all artists. I think if you aren’t gonna wake up and want to do art all day then really you shouldn’t try to be an artist. I just can’t stop doing art, so I really have to be self-disciplined.”

How does she do it? By creating deadlines, she says, and sticking to them. “I clock in and I keep track of my hours.” In film school, she saw firsthand the dangers of not adhering to a timetable. “I think the production schedule is the most important thing you can have for any kind of project. I found that’s where people always fall through.”

Even so, creativity often follows a rhyme and reason of its own.

“And you can’t rush art,” Barnard says; “there’s just no way to rush it. You cannot slap something together. It just doesn’t work.”

But when the spirit or the inspiration comes knocking, this is one artist who doesn’t hesitate to open the door and let it in.

Pillars of Inspiration, fine art and sculpture by Sasha Marie Barnard, is on view from 7 to 11 p.m. on Saturday at the Beach Cities Masonic Lodge, 1535 Artesia Blvd., Manhattan Beach. Free admission, with champagne. (310) 339-1044.