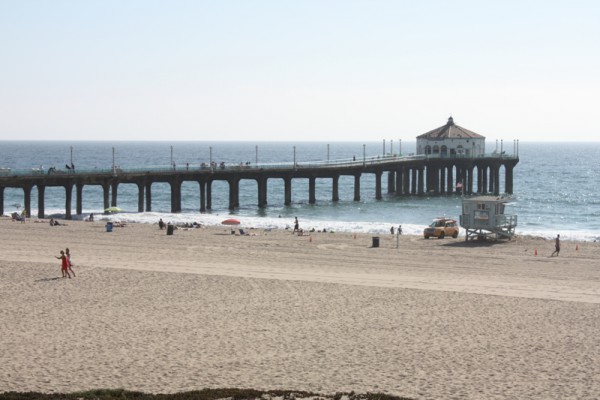 Hundreds are expected to gather at the Manhattan Beach pier this Saturday at 8 p.m. for an Earth Hour event organized by residents, city staff and environmental advocates.

For this Earth Hour on Saturday, Manhattan Beach residents are being asked to go beyond turning off their lights.

A group of city officials, residents and environmental advocates are leading the community in the launch of MB 2025, a visionary campaign aimed at switching 100 percent of the city’s power supply from fossil fuel to renewable energy in a decade’s time.

The interactive forum on Saturday will begin at 4 p.m. at the Joslyn Center, where experts and leading practitioners will drop knowledge on available renewable energy technology, funding options and benefits, both financial and environmental. Mayor Amy Howorth will moderate.

“Imagine all the money Manhattan Beach now pays Southern California Edison for electricity staying in the city instead and being paid to the city and investors in renewable power,” said Joe Galliani, the South Bay director of 350.org, a climate action group undertaking grassroots campaigns globally. “Imagine the payback period and the decades of free clean energy that will follow.”

The undertaking would be similar to Redondo Beach Unified School District’s installation of solar panels at two elementary schools early this year. The $8 million installation, funded by voter-approved Measure Q, is projected to save the district $15 million over the next 25 years. It is expected to reduce the schools’ energy consumption by 75 percent.

“That’s $7 million the schools now have to spend on education instead of utility bills,” Galliani said. “Not to mention all that green energy that they’re generating for the grid.”

This is not the first time South Bay 350.org has partnered with the city. In 2009, the two entities organized a successful climate awareness campaign which brought 1,300 people to the Manhattan Beach Pier to form a human tide line.

Sona Coffee, the city’s environmental programs manager, noted that MB 2025 is not yet an official city project but a means of gauging the community’s interest.

“It’s just the beginning of that conversation,” Coffee said. “We’ll have the forum to generate interest and see what direction the community wants to move in and go forward from there.”

Manhattan Beach’s ambitious campaign comes at a time when scientists, politicians and citizens alike are waking up to the reality of global warming. A report released by the American Association for the Advancement of Science last week states that the planet’s temperature has climbed about 1.4 degrees since the late 1800s. If carbon emissions continue at this rate, calculations indicate global warming will rise to two degrees Celsius by 2036, a threshold that would cause irreversible damage on the climate.

“The evidence is overwhelming: levels of greenhouse gases in the atmosphere are rising,” the report says. “Temperatures are going up. Springs are arriving earlier. Ice sheets are melting. Sea level is rising. The patterns of rainfall and drought are changing. Heat waves are getting worse as is extreme precipitation. The oceans are acidifying.”

Many policymakers and environmentalists believe that the switch from fossil fuel dependence to renewable sources — such as solar, wind and hydro power — is inevitable. It’s a matter of when, not if, and the team’s effort sets Manhattan Beach at the forefront of environmental initiatives.

MB 2025 is backed by the Renewables 100 Policy Institute, which works with cities across the country to make the transition from fossil fuel to 100 percent renewable energy. The latest city to make the pledge is Palo Alto. No city in the Los Angeles area has yet signed on.

“Change is slow,” Galliani said. “We are in a civilization right now that is set up for fossil fuel use. It takes some effort to get to this point.”

The team, which includes former mayor Portia Cohen and Oscars stage manager-turned-environmental advocate Dency Nelson, believes that the decades’ timeline set by MB 2025 is indeed ambitious but wholly realistic. Residents would not be mandated to do anything — the group’s hope is that the education they provide will help them see the clear benefits for themselves. The goal is to transition 10 percent of the city’s building stock to solar every year.

“All the programs we’ll be talking about at the forum are all available now,” Coffee said. “They’re all things that other communities are implementing now. If the city wants to move in this direction, we can begin implementing these programs.”

One such program is the Community Choice Aggregation: Some cities are aggregating the purchasing power of homeowners in the city and choosing energy options that are renewable, spurring immediate cost savings. If Manhattan Beach chooses this route, it can accomplish the switch to 100 percent renewable energy in 12 months, Galliani said.

The team’s hope is to designate Manhattan Beach as the ground zero for this movement in the South Bay and beyond.

“We’re very excited about this,” Galliani said. “I’m getting communication from folks all over the country who are equally excited that we’re doing this here. This is gonna have a ripple effect far beyond the South Bay.”