Easy Reader founder reflects on the purpose of community newspapers 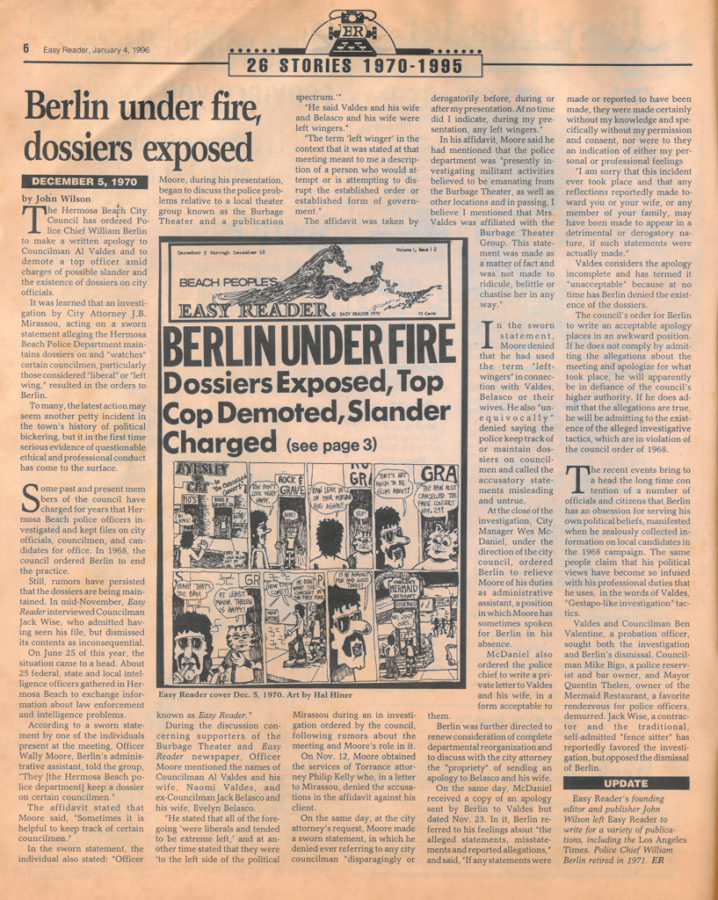 Fifty years ago, not long out of college, I put out a call for volunteers to help staff an upstart newspaper in Hermosa Beach, hoping to provide an alternative to entrenched local publications that favored big growth and the political status quo.

A humble beginning, but ER added a public voice to a growing protest wave. Concerned residents united and eventually broke the grip on city government of a powerful, pro-development faction and a reactionary police chief who behaved like a bully.

Today, Hermosa is served by a plethora of news outlets, print and digital. It’s a busier, slicker, louder place, and commercial development continues to encroach.

But it also retains much of its laid-back, beach town character, as yet unspoiled by the towering oceanfront hotels envisioned half a century ago by invested council members and a mayor who owned a valuable piece of commercial property on the Strand. Free of that long-retired police chief and his anti-counterculture views, the city is more socially and politically diverse. And Easy Reader is still in print, doing its thing.

But for how long?

As a recent Los Angeles Times report made starkly clear, the coronavirus pandemic has blindsided an already shaky newspaper industry, decimating the staffs and forcing the closure of local print papers across the country.

Among those quoted was Kevin Cody, owner of Easy Reader, to whom I signed over our shoestring operation in 1972. ER had always been a breakeven labor of love, and no cash or assets were exchanged, except its name and loyal following. All I asked was that Kevin do his best to build ER into a viable business and keep it going.

In time, he went weekly, started paying wages, grew his circulation to 45,000, and expanded to cover multiple South Bay cities. Then COVID-19 struck and ad revenue “evaporated,” as he put it in the Times article. Forced to lay off staff, he’s now hanging on with volunteers and a drastically trimmed print run.

But blaming the current economic crisis for the accelerated demise of local newspapers is too easy – virtually all of us bear some responsibility.

We began abandoning print journalism decades ago, lured away first by the brevity and visuals of TV news and later by the addictive Internet. As our attention spans withered, the web collected and analyzed our personal data, feeding us news items curated and sometimes edited to appeal to our individual preferences, segmenting us for target marketing while further polarizing us socially and politically.

At its best, a local newspaper connects, rather than divides. Even when we disagree with its editorial slant, we get news about our neighbors, schools, places of worship, sports teams, cultural events, city hall, recreation, crime, history – things that affect us as a community, with shared concerns. A local daily or weekly with a dedicated staff is not just a useful source of information about a town or region but its heartbeat.

Given declining readerships and rising productions costs, long-term survival is iffy for most. The obvious option is to publish online, which many do, including ER. But the web’s business model doesn’t favor hyperlocal papers and their limited audience. Too many readers want free access. Most advertisers can find cheaper and more effective ways to reach niche customers digitally. Tight budgets rarely allow for financial stability, sufficient staffing or decent salaries.

Without a print edition as a foundation, online content often tends toward news briefs and lighter subject matter in place of thorough, thoughtful reporting on challenging subjects. Even well-funded Patch, a corporate platform of 1,200-plus localized news sites sharing a common ad base, largely conforms to that format, even diluting with generic content.

Complacency and lazy reading habits drive the downward spiral. We often complain about how distracted young people have become with their mesmerizing devices and mindless programming, how it lowers standards and damages literacy. But how much time do we spend entranced by our own gadgets – their images, memes, gossip, news flashes, pop-ups, texts, tweets – the next shiny object just a click away?

How often do we turn instead to the pages of our local paper? Read through it with a young person, encouraging them to discover its value? Gift a friend or relative with a subscription? Donate to a favorite publication that’s struggling? Support a nonprofit like ProPublica or the Institute for Nonprofit News that partners with newspapers to report on vital issues? Choose engagement over apathy, the way Easy Reader got its start?

In an age when tweets pass for news, public officials declare the press an enemy, and the Internet becomes a cesspool of noise and disinformation, local print papers provide communities with essential news and fresh perspectives no one else will.

What a shame if we let them die off one by one, left to our own devices.

John Morgan Wilson grew up in the South Bay, graduating from Mira Costa in ‘63. A veteran freelance journalist and fiction writer, he’s the recipient of a Los Angeles Press Club Certificate of Excellence for Reporting on Media for work published in the L.A. Times. His novel, “Simple Justice,” (Doubleday), launched his eight-book Benjamin Justice mystery series in 1996, winning an Edgar Award for best first  novel from Mystery Writers of America. A revised 25th anniversary edition of “Simple Justice” is due out in the Fall. ER