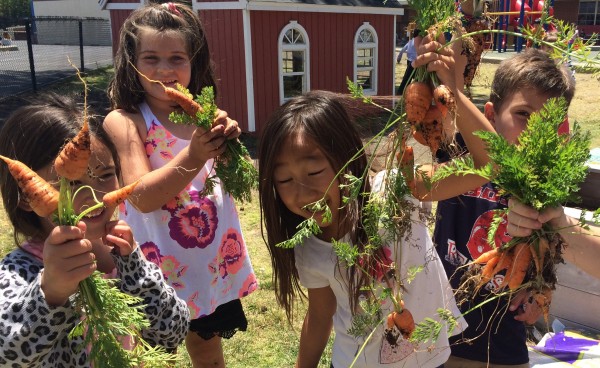 Kids from the Palos Verdes Peninsula Unified School District enjoy the fruits — and vegetables — of their labor in their school garden. Photos courtesy of Diane Heffernan-Schrader

Nothing was particularly special about the dead patch of dirt and weeds at the driveway entrance of the Valmonte Early Learning Academy campus in Palos Verdes Estates. But three years ago, local resident Diana Heffernan-Schrader, whose daughter at the time was a 3-year-old preschooler, felt her gardener instinct tingle — she saw potential.

Today, the Valmonte Children’s Garden, which the Silver Spur Garden Club last week awarded the Garden of the Season, is thriving. The 2,000 sq. ft. patch grows seasonal fruits, vegetables, herbs and flowers and houses a large bird and butterfly habitat area. It extends out to a one-acre farm area, added in 2012, where the district’s special needs young adults visit weekly to practice life development skills.

“We now have something that greets everyone who drives in, and it’s a special place for kids,” Heffernan-Schrader said. “When they get out of class they frolic in the garden looking for insects. They run around smelling things and touching things.”

Later this month, a group of local teachers, parents and food services representatives will attend the Edible Schoolyard Academy program in Berkeley for the fourth year to learn about building effective edible education programs and curriculum in schools. It was after Heffernan-Schrader and the team’s first visit to the Academy in the summer of 2011 that the Valmonte Children’s Garden came to fruition. 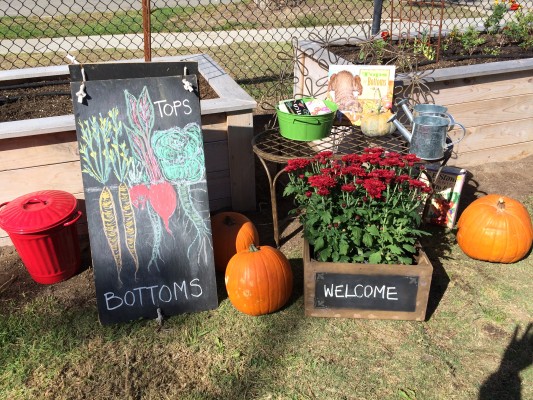 The word of ‘edible education’ is undeniably spreading on the Hill. Today, seven of Palos Verdes Unified School District’s 10 elementary schools have a sustainable garden program in place. Many more have sought advice from Heffernan-Schrader and her team, with plans to kick off their own programs. Palos Verdes High School, Palos Verdes Intermediate and Chadwick School are among them. They’ve also partnered with EnrichLA, a community nonprofit that builds edible gardens in L.A.’s low income schools.

“It’s a true grassroots experience that popped up from that one preschool garden,” Heffernan-Schrader said. “The ball just kept rolling.”

These school gardens have proven a surefire way to engage children in environmental stewardship, encourage healthy eating and teaching them where their food comes from, Heffernan-Schrader said. At Valmonte–which includes Valmonte Early Learning Academy, Transitional Kindergarten and special needs preschool Sunrise and Mommy and Me—each of the 13 classes have weekly scheduled visits to the garden for themed seasonal lessons, art projects and other hands-on activities.

“Parents are shocked by how many vegetables their children are willing to eat and willing to try,” she said. “By having the foundation of growing their food, they’re more likely to eat and try new foods.” 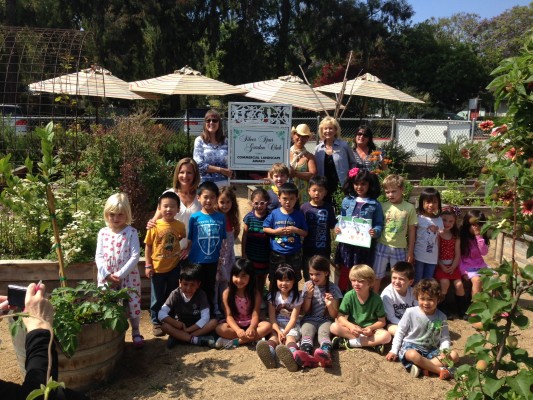 Valmonte Children’s Garden was recently awarded Garden of the Season by the Silver Spur Garden Club.

Heffernan-Schrader’s own daughters began participating in building their gardens at ages 1 and 3. Now at 4 and 6 attending Valmonte and Silver Spur respectively, they eat broccoli and carrots right out of the garden without a second thought, she said.

Various businesses and community groups have emerged from the woodwork to support the program, she said. PVP Conservancy is a partner; Kellogg Garden Products, as a sponsor, has donated soil to every school that has undertaken the program. Muir Ranch in Pasadena donates free seeds and seedlings to the schools every month.

Under a Seed to Plate program, vegetables produced on Valmonte farm are purchased by Redondo Beach restaurant Chez Melange. Since 2011, the district’s food services have been working with schools to put garden-grown produce into salad bars and paying market price to help sustain the programs.

“It’s all about community support,” Heffernan-Schrader said. “It’s just becoming a mutually beneficial relationship for so many different community groups.”