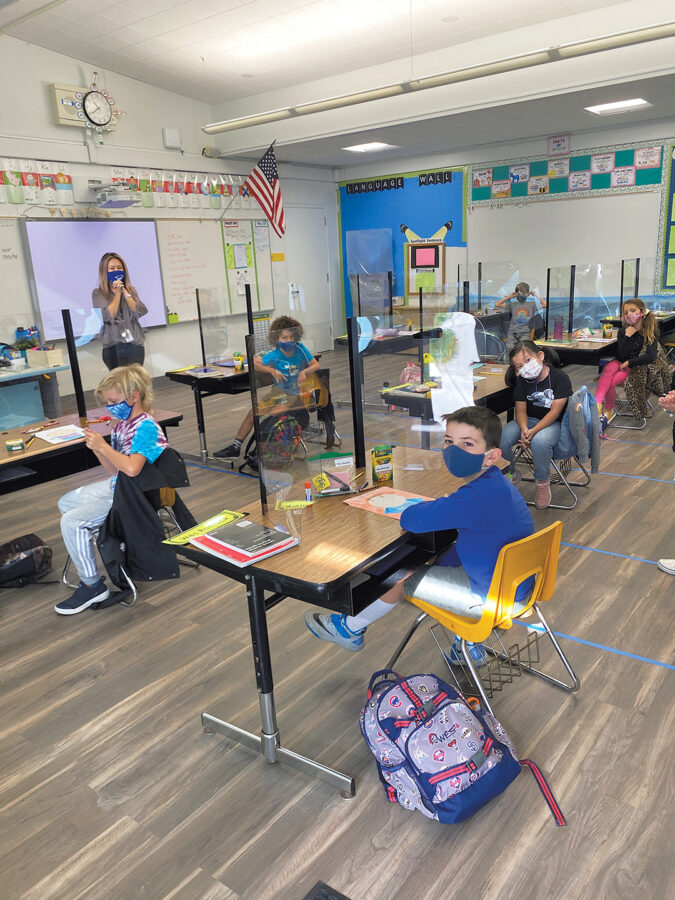 In-person learning began for the youngest students at Pennekamp Elementary and other MBUSD elementary schools on Tuesday. Photo courtesy MBUSD 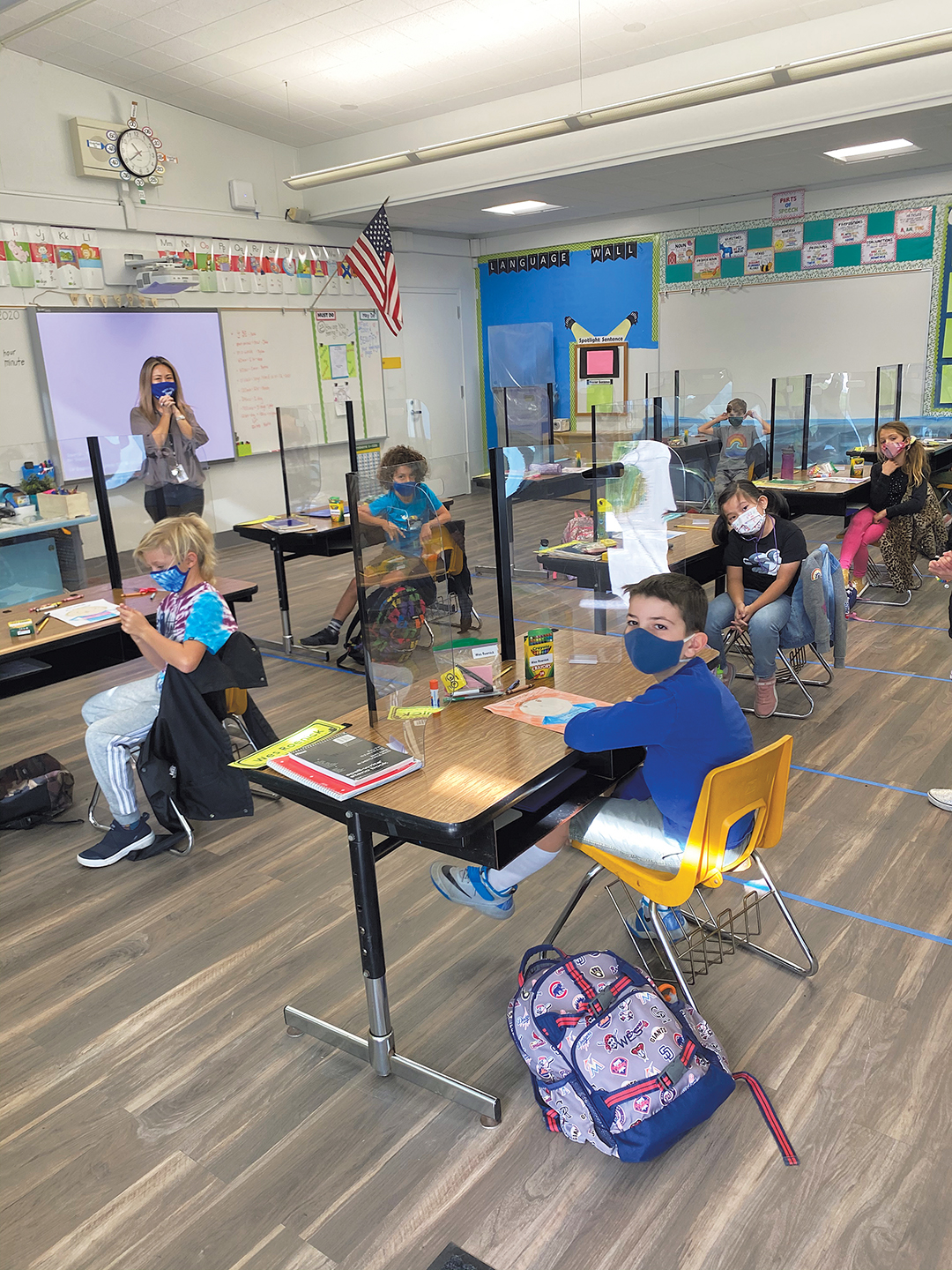 In-person learning began for the youngest students at Pennekamp Elementary and other MBUSD elementary schools on Tuesday. Photo courtesy MBUSD

Tuesday was the first day of school at Pennekamp Elementary, and Principal Karina Gerger noticed something was very different than years past. It wasn’t the fact that all the kids wore masks, though of course that was different. It wasn’t even the plexiglass-equipped desks and the handwashing stations in every classroom, though that too was something brand new.

What really struck Gerger was the fact that not a single kindergartner cried on this, the very first day of school many of them had ever experienced —  at least, in an actual classroom. And the reason for the lack of tears was because they’d seen their teachers many times before, at home, on their computers, on Zoom.

“We had our TK, or transitional kindergarten, and kindergarten students were here for the first time, and I and I have to say they were so brave,” Gerger said. “Because many times we have kindergarteners who are nervous or cry or hang on mom and dad the first day. And we didn’t have that. The kindergartners and TK students were just so excited to be on campus and see their teachers’ faces in person.”

Pennekamp transitional kindergarten teacher Patti Ackerman also remarked on the lack of tears —  among her students, if not herself.

“Yesterday honestly was an emotional day for me,” Ackerman said in an interview Wednesday. “Because half my class came, and that is the reason I went into teaching, seeing them walk through that door. They had on their masks and sat down like this is no big deal, this is what is expected of them. They were just so happy. It felt so good to be back in the classroom having real personal interaction with them. You just can’t replace that; there’s nothing like it.”

Ackerman has been teaching since 1993. At one point Tuesday, while kids were doing independent study, she had a moment where she just took in the strangeness of the scene —  a bunch of very little kids who just turned 5 within the last two months, all wearing masks, diligently working behind their plexiglass desk shields.

“I was worried about how they were going to adapt, wearing masks and having screens on their desks…But they were just completely fine,” Ackerman said. “They don’t know any different. This is their first experience of school. They are little, and they adapt. They just adjusted to being in the classroom. I didn’t have a single child cry.”

Ackerman’s 84-year-old mother, Joan Smock, was also a kindergarten teacher. She sent her mom a photo and called her at one point Tuesday. “Did you ever think a classroom would look like this?” she asked her mother, who responded, “Never.” Ackerman helps take care of her parents and has a son who is asthmatic, so returning to the classroom while the pandemic still rages wasn’t something she did without careful consideration. But Ackerman said ultimately, she felt the school district had “done their homework” in making every preparation and precaution possible to keep teachers safe.

“It’s a risk, and you have to think about it,” Ackerman said. “But when I chose to be a teacher, I chose it because I love it. I love what I do, and seeing those children brings me such joy every day. I feel blessed to be in the profession I am in…. And the ultimate reason I went into the profession was because, in my head, I have to do what is best for children. And what is best for children, if their family situation allows for it, is for them to be back in the classroom. Yesterday just reaffirmed that I made the right decision. Seeing their happiness confirmed that I did the right thing.”

All totaled in MBUSD’s five elementary schools, 725 students returned to classrooms this week as part of the TK-2 program.

Superintendent Mike Matthews praised the teachers who returned to classrooms.

“Our teachers knew their students were looking forward to this day, for the opportunity to see them face-to-face,” Matthews said. “For some of these students, it was their first day ever to school. So it’s just a fantastic day for them. It’s just a lot of work. I just have to praise our teachers. The moves they made —  to go from what they’ve always known to distance learning is remarkable, and then to move back to classrooms, still safely distanced while impacting a sense of belonging and connection. I have nothing but the greatest respect for our teachers.”

Gerger noted that as part of the hybrid model of the TK-2 waiver program, teachers have a double duty —  on Tuesday and Thursdays, they have students in the morning, then distance learning in the afternoon.

“It’s really double the work, double the schedule, because you have two different groups that you’re managing,” she said.  “And half of them are in class with you, while the other half are doing work at home on their own. And then once the morning students go home, then they have to jump on Zoom to be with the students who didn’t come in, and teach them as well….Teachers are really working hard to make sure they are seeing all their students every day. They’ve just done an amazing job. I’m so proud of them.”

Manhattan Beach Unified Teachers Association president Shawn Chen likewise praised the teachers who have returned to classrooms, but also expressed concern that some were trusting too much in an employer and a process that still left teachers vulnerable. Chen had advocated that the district wait until after the holidays to begin the TK-2 program.

“I’m glad for the places that the plan was implemented properly,” Chen said. “I hope that unforeseen consequences don’t occur as a result.” (see story on COVID-19 outbreak at MBMS).

Matthews expressed confidence that the district’s phased approach in returning to in-person instruction would be safe and successful.

“People ask me if I’m worried about these [COVID] numbers,” Matthews said. “But having this really gradual start makes me feel highly confident. We are starting slowly but safely. By the time next year rolls around, we should be ready to go.”

At the end of the in-person school day Tuesday, something occurred which brought both Gerger and Ackerman to tears. Parents were lined up outside the school, socially distanced as they waited for their children. The kids were released one student at a time to ensure safety. And as each child walked outside, they were met with a surprise.