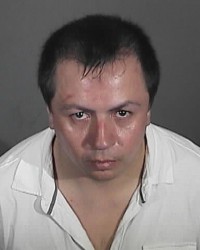 Daniel Lopez, a 36-year-old West Covina resident, was apprehended after detectives witnessed him breaking into a car in a La Puente parking lot. Redondo Beach and Manhattan Beach police were conducting a joint surveillance operation when Lopez smashed into the vehicle. A short chase ensued. After Lopez’s arrest, police discovered items in his car linking him to South Bay car burglaries.

A subsequent search of Lopez’s home found tens of thousands of dollars worth of electronics and jewelry.

“We believe he was targeting specific shoppers and was basically casing them and casing the stores,” said RBPD Sgt. Jon Naylor.

Lopez is believed to have used his blue 2006 Dodge Caravan to follow victims and later burglarize their vehicles, generally by smashing out the vehicle window, according to police reports.

Naylor said Lopez is believed to have been part of a burglary ring that has targeted stores throughout Los Angeles and Orange counties. More than 100 car burglaries have occurred using essentially the same motus operandi – shoppers are followed from a store to their cars and burglarized when they go inside another store. Apple stores have been particularly targeted.

Naylor said shoppers should be on alert.

“It’s good to know your surroundings, for sure,” he said. “Don’t leave things, especially high value items, unattended in vehicles.”

Police have identified at least 10 local victims, and are hoping more will come forward. Anyone who has information related to the investigation is encouraged to contact Sergeant Jon Naylor at the Redondo Beach Police Department’s Special Investigations Unit at 310-379-2477 Ex. 2324. ER