“Embrace of the Serpent” – the strong survive [MOVIE REVIEW] 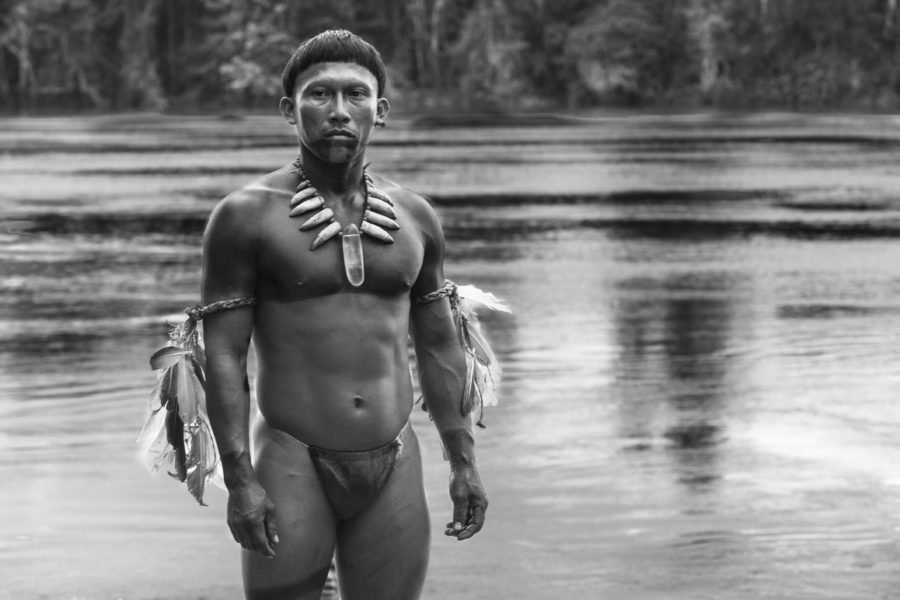 The complexity of “Embrace of the Serpent” lies within the simplicity of its narrative. This, however, is not a simple story; far from it. The scope of director Ciro Guerra’s narrative is no less than the white man’s decimation of the jungle and its inhabitants.

It is early in the 20th century and Theo, based on the actual Amazon explorer Theodor Koch-Grünberg, has been led through the labyrinth of the Columbian Amazon by his guide and companion Manduca in search of the legendary yakruna plant with curative properties. Theo is dying and all the other tribal Shamans have instructed them to search for Karamakate, the last member of his tribal people and the only one to know of the location of this miracle plant. Landing on a distant shore, carrying a nearly dead Theo, Manduca pleads with Karamakate to help. But Karamakate distrusts all whites and views Manduca as a traitor to his people for traveling with the white man. It was the white man who decimated the jungle in search of rubber; it is the white man who enslaves and tortures the native people in their quest for riches. But, Manduca insists, Theo is an explorer and botanist interested in documenting what has happened in the Amazon and preserving the nature and the native inhabitants. Karamakate agrees to take them to where the yakruna plant grows but only on very specific conditions and terms.

Forty years later, Evan appears at the same shore in hopes of meeting Karamakate. Although Theo never made it out of the jungle, Manduca took his journals back to Germany where they were published to great acclaim. Evan, based on real life explorer Richard Evans Schultes, has made the arduous trip in hopes of tracing Theo’s steps in his quest for the yakruna plant. Still wary of whites, Karamakate nevertheless agrees to help Evan whose motives are more suspect.

Back and forth in time, from one explorer to the next, Guerra shows us what was done to the jungle by rubber barons carving out their riches at the expense of nature and native population, tribes who were further exploited and tortured by priests trying to convert them and beat the paganism from their starving bodies.

Filmed stunningly in black and white, the depth of focus, use of light and shadow juxtaposing with the imposing mountains and rapid currents of the river makes one part of nature in a way that is usually conveyed only in 3-D. The dialogue is sparse but the emotion is intense. The experienced actors Jan Bijovoet (Theo) and Brionne Davis (Evan) are excellent but are outshone by Nilbio Torres as the young Karamakate, Yauenkü Miguee as Manduca, and especially Antonio Bolívar Salvador as old Karamakate, all members of dying Amazonian communities.

Seen as a travelogue of life along a vibrant river in a long ago time, it is unsurpassed. As a history of the evil man has done to man, it is shattering. Guerra, who co-wrote the script with Jacques Toulemonde, has captured time and place and context. But this film would be nothing without the cinematography of David Gallego for it was he who captured the beauty and the terror inherent in the environment. If this visually stunning film has a weakness, it is in its length for at times the pacing and story-telling is repetitive. But still the trip down the Amazon is more than worthwhile because if you never have the chance to see this wonder in person, Guerra has allowed you to feel it. Karamakate understands that to conquer the serpent, you must embrace it, and now we know too.

Nominated for both the Oscar and Independent Spirit Awards in the foreign language film category. In Spanish and various native languages with subtitles.