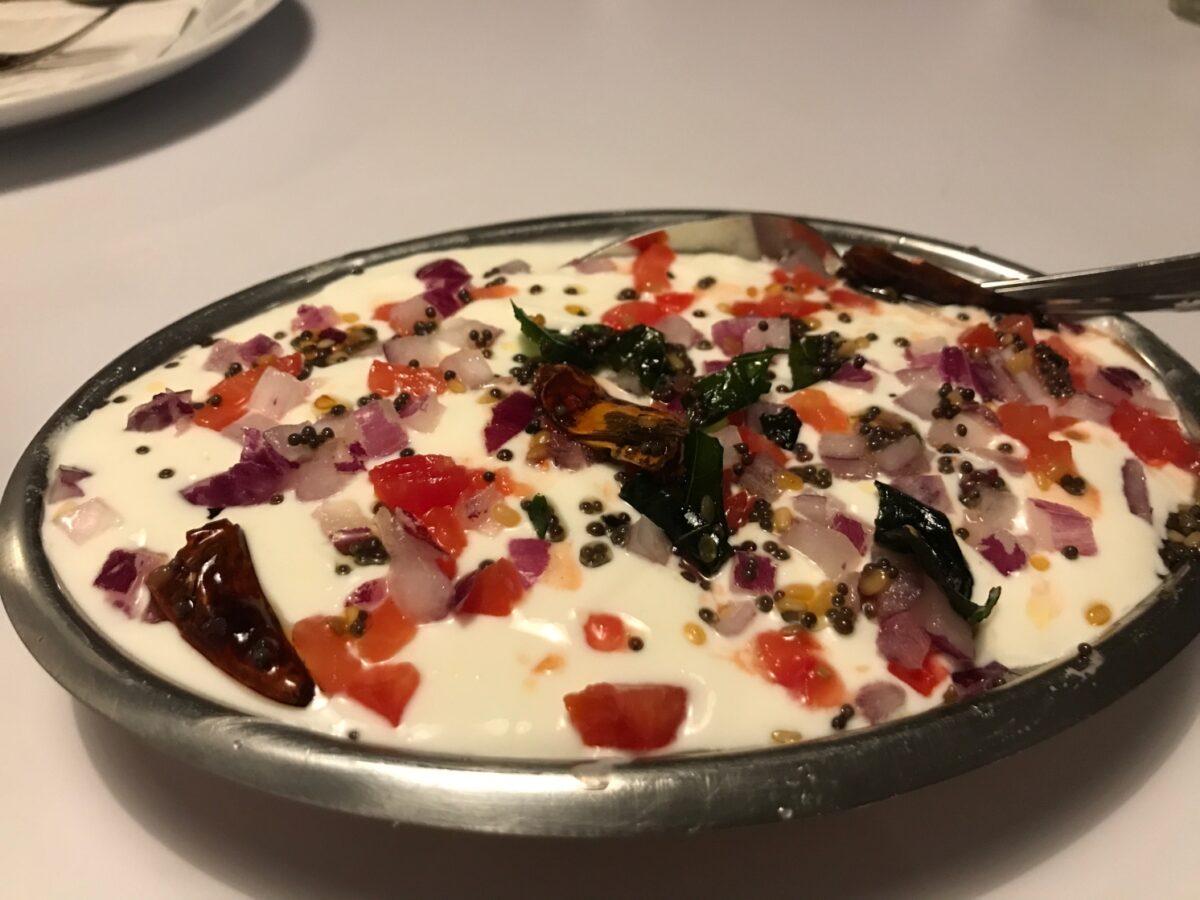 Thayir vada is a doughnut made of lentil flour beneath a layer of yoghurt with savory spices. Photo by Richard Foss.

I like it when restaurants display symbols of culinary culture. The images of village markets laden with exotic produce, bakers proudly holding fresh loaves, grandmothers stirring pots over wood fires, and families at the table are more than mere decoration. It’s a reminder that these recipes are the legacy of countless generations of loving experimentation in home kitchens. Those pictures whet diners’ appetites for the feast to come, allowing them to imagine themselves in those pictures, enjoying that hospitality.

It is therefore boggling when a restaurant that represents one of the longest unbroken culinary traditions in human history has bare walls. I first visited the Copper Pot Indian Grill in Redondo a few days after they opened, and figured the stark white expanse would be covered with art after they settled in. More than a month later, that hasn’t changed. Given the richness of visual art from South Asian tradition, this has to be a deliberate omission, but I can’t imagine why.

One item I would nominate for the décor would be a large map of South India, because that’s where this cuisine is from. It’s a region most Americans don’t know much about, and it has a distinctive cuisine based on ecology. Among other things, they use more seafood, lentils, plantain, and coconut than they do in Punjab and northern regions, which historically had the most immigration to America. The cooking style is different too, with more flatbreads and rice dishes and distinctly different seasonings.

This means Copper Pot has some offerings that are very different from most in our area, but unfortunately the menu does a terrible job of explaining them. There are five different styles of biryani rice dish offered, but few or no clues about how they are different from each other. Some are named after ingredients that are unfamiliar to most people – would we prefer the one that contains gongura leaves to the one with rogan spice? Luckily the restaurant wasn’t very full so our server was able to spend time explaining some of the dishes. We ordered a few that we knew, a few that we didn’t, and sat back to see what happened.

The first thing to arrive was thayir vada, doughnuts made of lentil flour beneath a layer of yoghurt with savory spices. Eat this as soon as it arrives at the table and it’s amazing – a warm doughnut with herbal overtones under cool yoghurt topped with herbs and chillies. It’s spicy and cooling and warm at the same time, something pretty much without parallels in European cuisines. It was aptly followed with another showstopper from South Indian cuisine, a masala dosa. This item surprises people when they first encounter it, because it’s a crispy tube of batter almost two feet long – and I had ordered a small one. 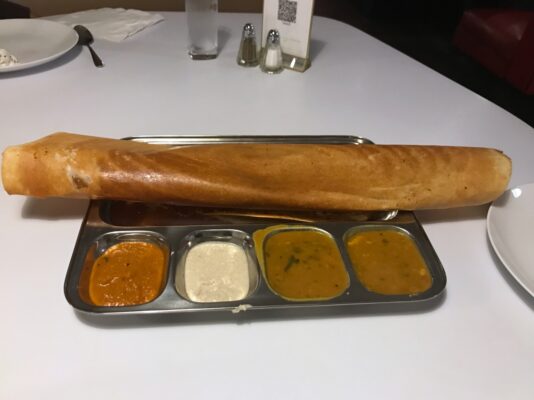 The dosa, a crisp crepe that can be up to four feet long, is a specialty at Copper Pot Indian Grill. Photo by Richard Foss

(They make a four-foot long dosa for family celebrations, but even the standard size is likely to activate the phone cameras around the table.) Dosas aren’t as much food as they look like because most of that tube of crisp batter is empty – the middle has a layer of seasoned vegetable stew, and you can crunch on the cracker-like sourdough crepe by itself in between scooping up the stew with it.

That sourdough batter that makes such a light crepe can also be ordered in an uttapam, which is not exactly the same thing as a pizza but occupies the same ecological niche. I had one along with a samosa when I visited for lunch, and it’s satisfying for all the reasons I like a good pizza. The samosa was good too, the conventional rounded pyramid of crispy dough with slightly different seasoning on the vegetables than usual.

Another item that is a good starter is egg kothu parotta, which sounds odd when you explain it. It’s a flaky flatbread that is torn into pieces and then briefly sauteed with spicy sauce and scrambled egg. I was familiar with a similar dish in Ethiopian restaurants, a legacy of the centuries of trade between India and Africa. This dish is quite spicy unless you request it otherwise, but well worth trying for the combination of flavors and textures.

If you like to start a meal with soup, you might consider the crab laksa, which has plenty of shellfish in a broth with a little coconut and a little pepperiness. It’s mildly spiced compared to many other dishes here, and even those who are averse to peppery flavors should find it within their heat tolerance.

For our main courses at dinner, we ordered an Alleppey fish curry, lamb Gilli biriani, mutton ghee roast, and at our server’s suggestion a tandoori chicken variation called murgh malai tikka. This was quite different from the typical tandoori chicken with its bright red coating made from a tamarind-based sauce – instead the chicken is marinated twice, once in lemon with ginger, garlic, and spices, the second time in yoghurt, herbs, and cream. Yoghurt and lemon both help tenderize the meat and infuse slightly tart flavors, and the resulting dish has an almost Mediterranean lightness and simplicity with the complexity of Indian flavors beneath.

Another item that used citrus in an unexpected way was the Alleppey fish curry, which combines coconut milk and tangerine juice for a remarkable tropical effect. It reminded me of a seafood dish I had in the Caribbean, which is probably not an accident because South Indian laborers in Trinidad and Tobago strongly influenced that cuisine. The tinge of sweet fruit juice and fresh coconut milk with the spice was a great effect, and I highly recommend this dish.

I ordered both a lamb and A mutton dish so someone at our table who had never liked mutton could try it side by side with lamb. The mature sheep meat has a reputation for being heavily gamey and tough, and it can be both when poorly cooked, but a delight when used appropriately. A marinade that breaks down the fibers in the meat takes care of the toughness issue, and the more full-flavor is an asset when paired with robust spicing. This recipe is a modern and somewhat unusual one in that the mutton is put in a pressure cooker with a garlic and ginger paste and clarified butter, then combined with spices and roasted. The two cooking methods infuse the spices into the tenderized meat, which is soft but not mushy. If you’ve never had mutton before, this is a great way to try it, and after you do you may decide you prefer it to the milder lamb.

That’s not to say I wouldn’t order the lamb biryani again, because I certainly would. Gili biryani is a modern recipe in which meat that has been marinated and partially cooked is finished in a pot of rice and vegetables that are simmered in spiced vegetable stock with a hint of rose water. This is rice pilaf given a distinctive Indian twist, and it has made the hotel in Chennai where it was invented into a place of pilgrimage for connoisseurs of Indian food.

Indian desserts are offered, and even though it’s easy to over-order here, you should save room for some. The kesar pista, an Indian-style pistachio ice cream on a stick, is not made in house but worth a try, but I prefer thandai phirni. This is a creamy pudding with cardamom, saffron, and nuts, similar to a rice pudding. If you have a bit of leftover heat on your tongue, this will cool things down in a most delightful way.

Prices at Copper Pot were quite reasonable, with a dinner for five people costing about $120. Service was earnest and friendly, by people who appreciated our interest in learning more about the cuisine. There are things that need work– the restaurant has poor acoustics that could be improved by putting fabric on the walls, which would also dress up the drab surroundings, and they really need a menu rewrite with more detailed descriptions. For those who are culinary adventurers, the experience is unlike that at any Indian restaurant in many miles, and Copper Pot should be a destination for anyone who wants a taste of Southern India.