Ethan Coen’s slices of life at the Taper 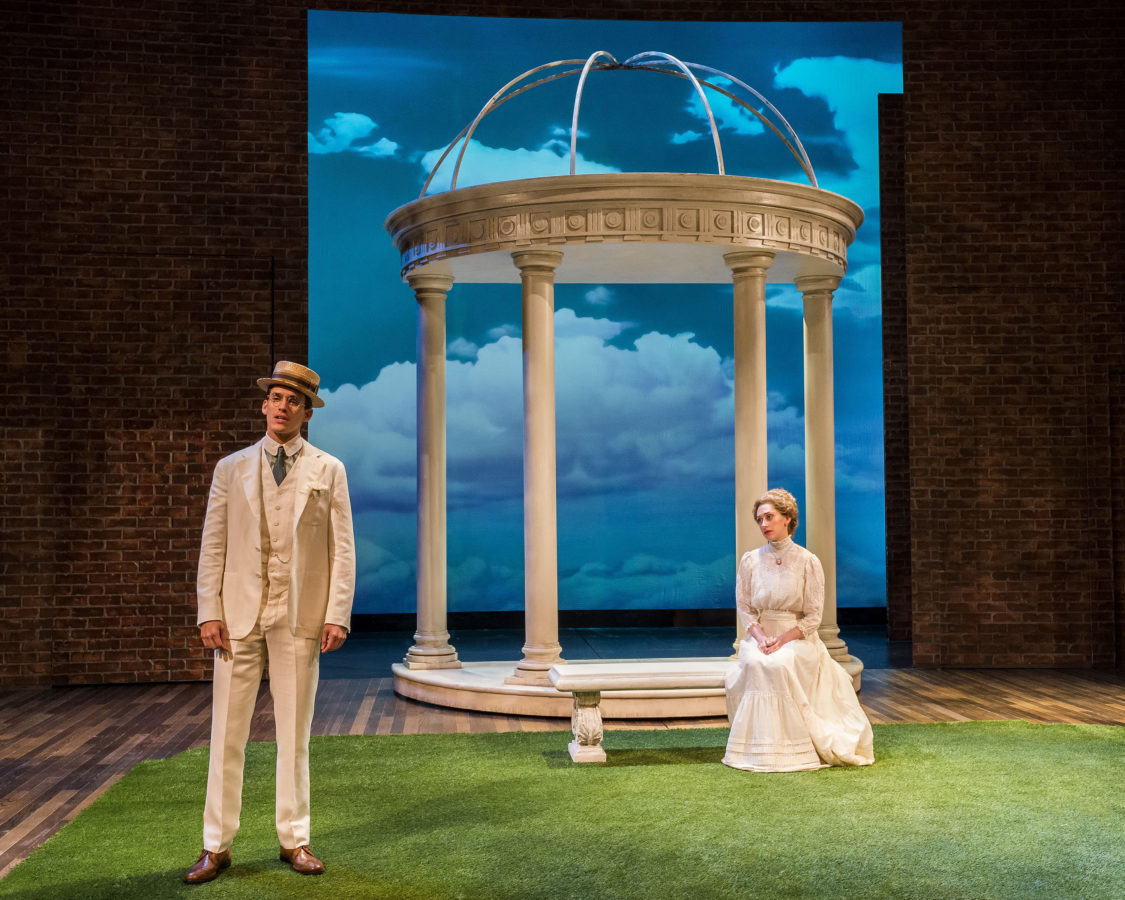 “At the Gazebo”: Sam Vartholomeos as Carter and Micaela Diamond as Dorothy. Photo by Craig Schwartz

Playwright Ethan Coen is one-half of the high-flying Coen Brothers (with Joel), whose cinematic career has encompassed “Blood Simple,” “Fargo,” and “No Country For Old Men,” among others others. They’re true movie magic magicians; whether Ethan also creates theater magic is still an unanswered question.

So let’s get right to “A Play is a Poem,” the umbrella title for five vignettes and their entertaining musical interludes, onstage at the Mark Taper Forum through Oct. 13. 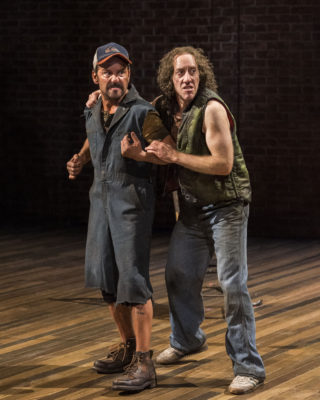 “The Redeemers”: Max Casella as Cal and Joey Slotnick as Wes. Photo by Craig Schwartz

Director Neil Pepe has worked with Ethan Coen for several years, and this is their fourth collaboration. The other works have, to the best of my knowledge, been presented only on the East Coast. So this is both a local debut and a world premiere to boot.

Before summing up the playlets themselves, I would like to emphasize that the production values are, as expected, first rate. I’ll take a moment here and applaud scenic designer Riccardo Hernández, costume designer Sarah Laux, and lighting designer Tyler Micoleau. Original music is by Nellie McKay, and she’s brilliant. More on her later.

The individual standalone components in “A Play is a Poem” (rather vague as a title) are slice of life character studies rather than fully fleshed-out works, and in some cases they seem like trial balloons or “auditions” for later work. Each piece is well acted and the timing is impeccable, so if there are concerns, it’s not with the cast or the acting.

The criticism, as I see it, is that the plays themselves are divertissements, more like entertaining parlor tricks than meaty nuggets the viewer can sink his or her teeth into. But actually, though, in some cases, the writing is too literary for the stage. If you compound that with audience laughter and general restlessness, it’s easy to miss much of the dialogue. Speaking just for myself, I couldn’t follow “At the Gazebo” (which has characters with Southern accents) and at the end really had no idea what it was about. Although I was intrigued enough to want to read the script, even that, without distractions, wasn’t a walk in the park. In this particular case, maybe Coen has a short story on his hands rather than a (lifeless) dramatic work. 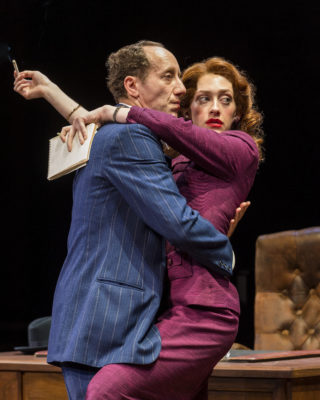 After the talented and versatile Nellie McKay charms us with a bit of what I’ll call musical comedy, “The Redeemers” kicks things off with a tale of three brothers, the sons of an abusive father whom the two eldest (Max Casella as Cal and Joey Slotnick as Wes) have just killed. Cal stuck him under the floorboards, but had to dismember him in the process. The third brother, Gary Allen (CJ Wilson), unfortunately happens to drop by, saying that their old man (whom he doesn’t know is now kaput) has changed his ways and wants to apologize for his bad behavior as a father. Wes isn’t so forgiving: “He never hit you as much. Time you came along he was arm-weary.”

Gary Allen continues to talk about making peace with the past, until he excuses himself to use the bathroom and on his way back makes a gruesome discovery. Things heat up from here, underscored by a sputtering coffeemaker that gives a wry undertone of humor to the piece. Let us say that, like a Greek tragedy playing itself out, the father’s brutality leaves behind its own legacy.

“A Tough Case” is a gumshoe escapade set in Los Angeles, 1948, all noirish and seedy, with a kind of Coen Brothers meets Raymond Chandler storyline. Ed Curtin (Joey Slotnick) of Curtin & DeMarco Investigations is interviewing for a new partner after DeMarco began an affair with a client’s wife and the client got his revenge and then some. Curtin then hires Don Baines (CJ Wilson), who combines the attributes of neophyte and nerd. He provides a certain ironic subtext to the play. Curtin’s secretary, Lindy (Micaela Diamond), gives him someone to banter with (“…and perc some coffee, will ya Lindy: My head is fighting the battle of Gallipoli and not for the Ottomans”), and their prolonged kiss is like they’re visually reenacting the cover of a lurid paperback, circa the 1950s. 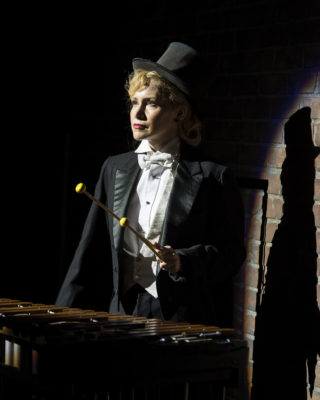 “At the Gazebo” (as noted above) seems to take place on a Southern estate maybe during the 1920s. Dapple and white-suited Carter (Sam Vartholomeos, who resembles a younger Matt Dillon) has just returned from Paris, France to Natchez, Mississippi, and 95% of the play is simply the conversation he’s having with Dorothy (Michaela Diamond), whom he’s trying to court. Very slowly, and much too subtly I’d have to say, certain “unnatural” behavior is alluded to, although what seems most clear is that the women in Paris are not averse to oral sex. For Dorothy, of course, this might as well be devil’s talk. Other matters, such as Carter’s relationship with Violet (his former love interest) and how it led to her “distress” and institutionalization, are far from clear.

There’s probably a core idea behind “At the Gazebo” and I’d certainly be interested in knowing exactly what Coen was hoping to achieve with it, but as it’s staged here the encounter goes on too long, is hard to hear and to comprehend, and (I hate to say this) needs to be simplified or made a little more explicit. In a movie there are close-ups, but not when watching a play from 20 or 30 rows back. 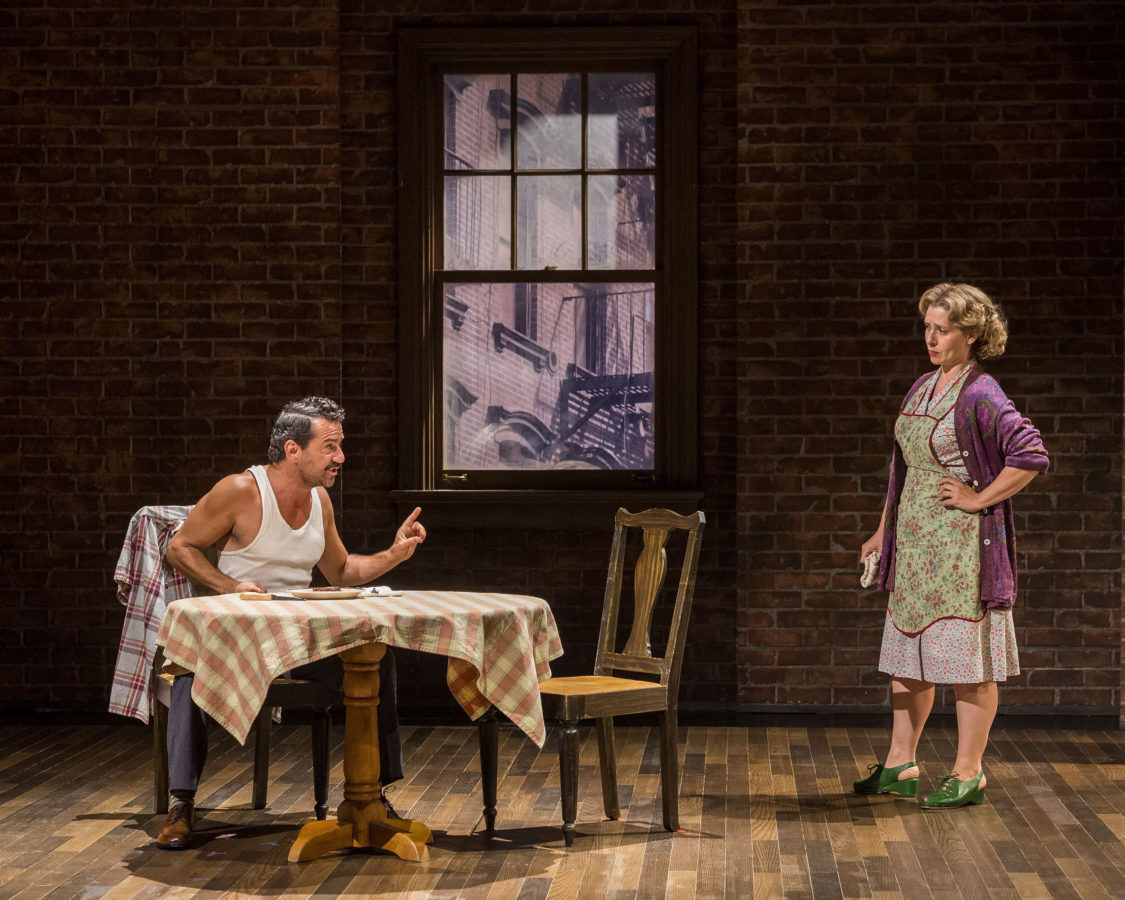 “The Urbanes”: Max Casella as the Cabbie and Miriam Siverman as the Wife. Photo by Craig Schwartz

“The Urbanes” is rather treacherously titled, since no one here is especially elegant and cultivated. We’re in a tenement apartment next to the el (as the above-ground subways were called), possibly in the Bronx and presumably in a Jewish household. No date, but maybe the 1950s, early ‘60s? There’s the cabbie (Max Casella), trying to eat an overcooked piece of liver, and his wife (Miriam Silverman), flinging doses of sarcasm back and forth with him, but the story is about the cabbie planning to go into a partnership with his friend Joey (Joey Slotnick) so they can own and operate their own taxi. After Joey backs out, the cabbie expects another friend, Steve Tudik (Ro Boddie) to come through. As Tudik says at one point, “It’s a rat race unless you’re ahead of the game. Even then it’s a rat race.” What starts out as a kind of sitcom takes on an aura of desperation and sadness. In short, one man’s dreams seem to flutter away. 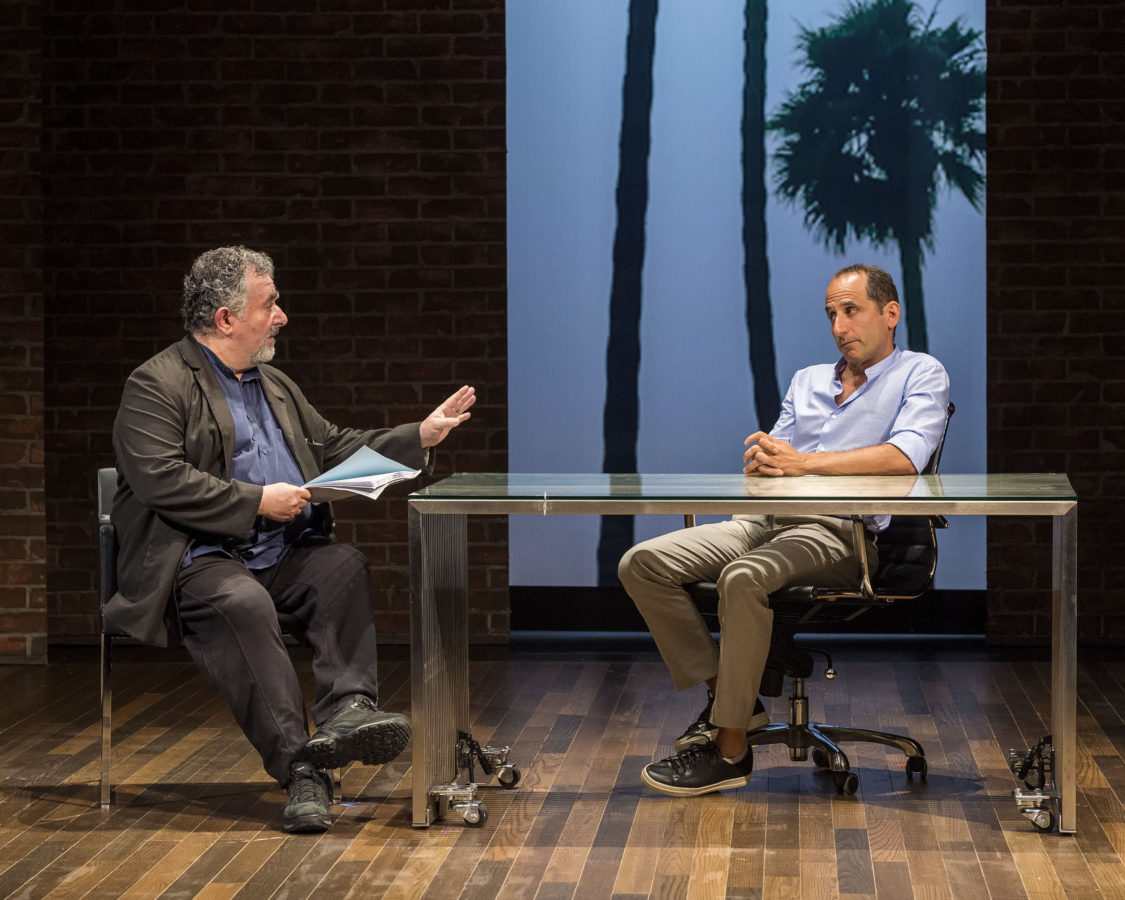 “Inside Talk”: Saul Rubinek as Jerry Sterling and Peter Jacobson as the Movie Executive. Photo by Craig Schwartz

“Inside Talk” centers on a studio executive (Peter Jacobson) who sits at his desk and takes pitches from various producers, in this case Lou Wald (Jason Kravits) and Jerry Sterling (Saul Rubinek), both of them with rather flimsy, unbaked ideas. It turns out that Wald and Sterling, while naturally being competitors, are using the same young and inexperienced writer (Sam Vartholomeos). There’s a lot of kvetching and underneath it all perhaps a spoof on Jews in the movie business (“Why are we all Jews?” Sterling says aloud) and maybe even on how films get pitched and made or not made or made (successfully) but by another company.

These five works have their moments, but they don’t add up to a memorable outing. But Ethan Coen is clearly a very good writer and for the time being better with film scripts than plays. He’s got the potential to deliver for the theater the same as he’s delivered for the silver screen.

Oddly enough, or not, the one who stands out is chanteuse and performer (piano, ukulele, and marimba) Nellie McKay, whose brief part in “A Tough Case” garners more than a few chuckles.