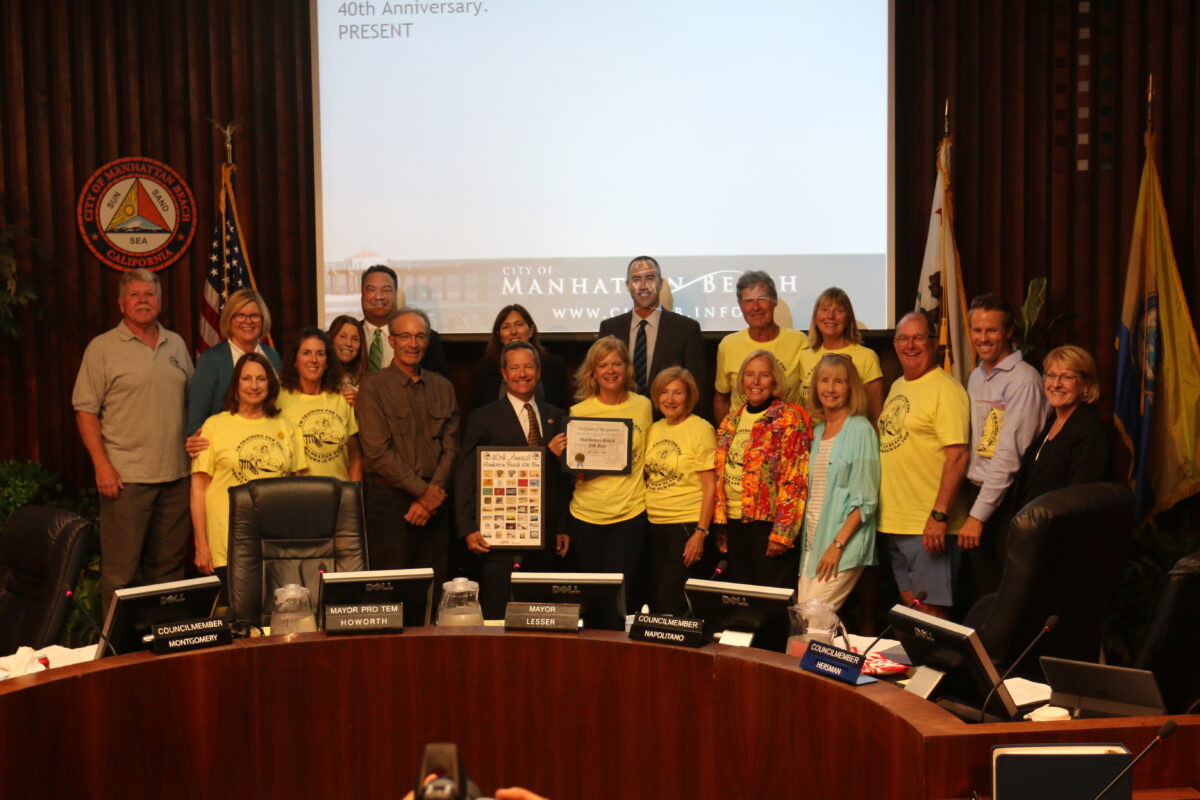 Members of the City Council pose with volunteers for the upcoming Manhattan Beach Hometown Fair and 10K. Photo by Ryan McDonald

The Manhattan Beach City Council rejected an urgency zoning ordinance Tuesday night that would have extended a ban on health care uses on Sepulveda Boulevard, choosing instead to pass a modified ordinance that requires expanded review for all proposed health care projects on the street.

The council’s decision extends to medical offices, urgent care centers, senior living facilities and more, and requires that applicants obtain a conditional use permit before opening. It represented a compromise on a night that the council had been asked to consider extending a moratorium on medical office uses, passed last month, for an additional 10 months, 15 days.

And while the conditional use permit plan garnered unanimous approval, the issue exposed differences in the council about how to approach the future of development on the Sepulveda corridor, which was itself the subject of a separate council agenda item later in the night. A majority of the council appeared to agree with arguments raised by the public that a ban, even a temporary one, would unwisely constrain free market forces shaping the area. But Mayor David Lesser and Councilmember Steve Napolitano were supportive of the ordinance, saying that it represented a temporary pause while the city determined how it wanted to approach land use regulation along the city’s busiest street.

“We need time to plan for Sepulveda. [The urgency ordinance] is the tool provided by the state so that local agencies can plan,” Lesser said.

Health care offices are increasingly common tenants along Sepulveda, with several having gone up in the last decade at busy intersections with Manhattan Beach Boulevard and Marine Avenue. The issue of the impact on surrounding residences emerged earlier this year when resident Paul Barkopoulos complained about an Exer Urgent Care facility scheduled to fill the spot once occupied by White & Day Mortuary. At the time, planning officials said that the project was in compliance with the zoning for the area, and did not require a conditional use permit.

Barkopolous, himself a doctor, complained that urgent care facilities created a risk of crime for their neighbors in part because they dispense narcotic pain medications and should receive greater scrutiny. The council downplayed these concerns Tuesday night, instead focusing on the scattershot patterns of development on the street.

The council members opposed to a ban said that undesirable projects could be weeded out through the traditional zoning and review process. Councilmember Steve Napolitano reminded them that, for most of the different types of health care uses, no CUP was required, and that there was little the city could do to influence the outcome.

But too much regulation, opponents cautioned, could prove even worse. The council recently approved the Gelson’s project at 8th and Sepulveda, but extensive neighborhood opposition to the store dragged out the approval process over two years. Some cautioned that the delay had given Manhattan a reputation as an unfavorable place to open a business.

Having just approved the Gelson’s project earlier this summer, even a temporary ban on new health care uses would be “sending a message to investors that they are not welcome,” said Mike Grannis, a broker at Highland Partners. Grannis pointed to recent trends in retail, saying that the Internet was limiting the prospects of brick-and-mortar retailers. Health care, he said, is one of the fastest growing industries, so it is only natural that they should comprise a growing share of potential tenants, especially in a high-rent location like Manhattan.

“Banks, grocers, offices, and medical offices are the ones who have been interested up there on Sepulveda,” Grannis said.

Highland Partners has advised Sunrise Senior Living, which has proposed an assisted living complex for the Goat Hill section of Sepulveda, just south of 2nd Street. Under the terms of the urgency ordinance that staff presented Tuesday night, they would not have been allowed to submit an application.

This prompted Councilmember Richard Montgomery to criticize both the plan’s impact on the availability of senior housing, and on the wisdom of restraining the free market.

“It’s common sense. Why would someone put $6 million into a project if they thought it was going to fail? Obviously, they’re going to build something right for our city,” Montgomery said.

The crux of the discussion became the extent to which leaving things to the marketplace could produce undesirable outcomes for the city. Napolitano and Lesser cautioned that just because medical offices can afford the area’s escalating rents, that does not mean that having as many of them as possible was in the best interests of the community.

Each of the council members recognized that the conversation was beginning to echo discussions from the previous year about the Downtown Specific Plan. And the amended ordinance resembles an aspect of the downtown plan, which among other things imposed a conditional use permit requirement for the conversion of ground-floor retail space into office use in the city’s downtown.

But later in the evening, in discussing more general planning efforts for Sepulveda, the council showed little appetite for another effort like the one needed for the downtown plan. They called for the formation of a committee of residents and business owners to volunteer their time in developing potential suggestions.