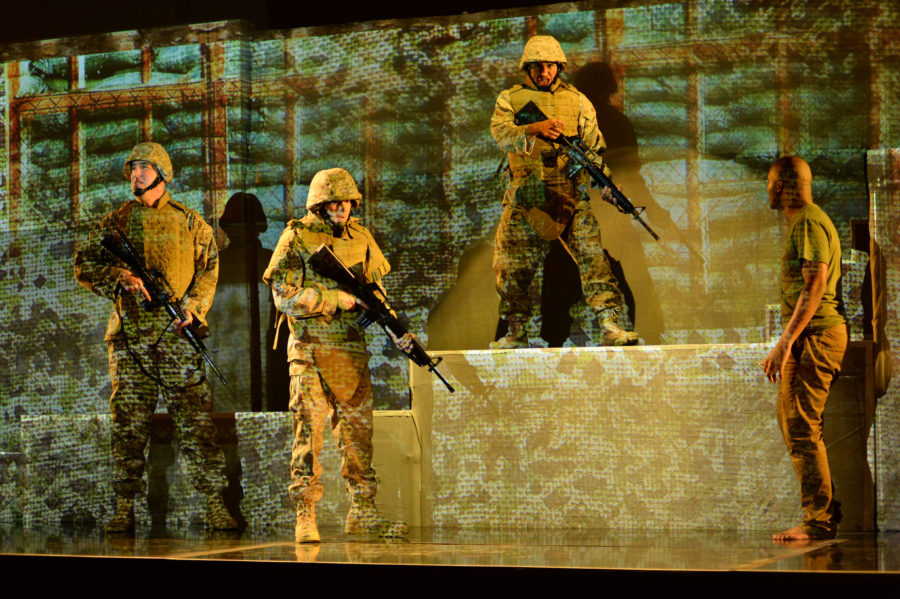 Stepping into the Army National Guard for an opera is not quite the same as entering the Dorothy Chandler Pavilion or Disney Hall, but Long Beach Opera likes to keep us on our toes (and off-balance at the same time), which thus makes this an almost ideal venue in which to witness “Fallujah,” the world premiere opera composed by Tobin Stokes and with a libretto by Heather Raffo. There are three more performances, two on Saturday and one on Sunday afternoon.

The story is based on the experiences of Christian Ellis, USMC Sergeant (ret), who joined the Marines at age 19 and ended up in Fallujah, Iraq, where fierce battles were fought in 2004. Ellis was in a platoon that was ambushed. One of his best friends was killed and he himself suffered a fractured spine. He was sent home with post-traumatic stress disorder, or PTSD,

A few years later, while at a retreat for soldiers suffering from PTSD, Ellis was befriended by philanthropist and filmmaker Charles Annenberg Weingarten. The latter, intrigued by the fact that Ellis had been trained as an opera singer, decided to commission an opera based on what Ellis had gone through.

The work was developed at Opera Vancouver, workshopped there and at several other venues such as the Kennedy Center in Washington, D.C., The Culture Project in New York City, and the University of Southern Florida. However, it doesn’t seem to have been given a fully-staged production, until Long Beach Opera took an interest.

The interior of the Army National Guard (a block or two away from the Museum of Latin American Art) feels like a cross between a gutted church and a gymnasium. It’s large and spacious, and on a recent evening it was very warm. The audience sits on fold-up chairs and the stage is wide and narrow. There’s an army humvee off to the right, and it’s one of the few props apart from a couple of chairs, a bed, and high-powered rifles. 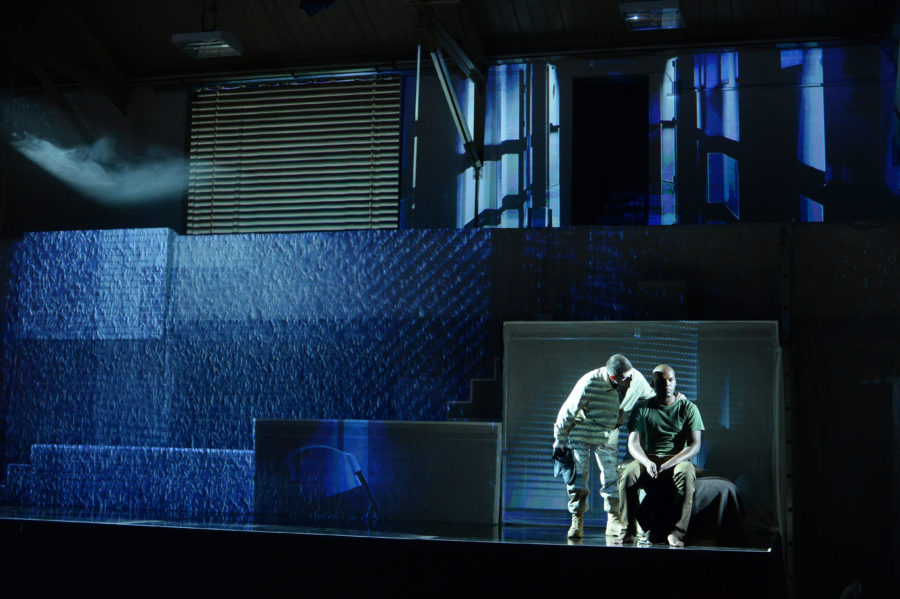 The action toggles between the VA hospital where USMC Lance Corporal Philip (LaMarcus Miller) is on 72-hour suicide watch, and the battlefront of Fallujah, the latter presumably being flashbacks. We first see the young man being escorted to his room by the Corpsman (Arnold Livingston Geis), who confiscates Philip’s belt and his shoes.

Philip’s adopted mother is sung by the always reliable Suzan Hanson. She has come to the hospital but Philip refuses to see her. I might mention here the video monitors that occasionally pan down a long and seemingly endless hospital corridor. But right as we get near the end of it we suddenly find ourselves back where we started: There’s a frustratingly Sisyphus-like quality here, as if the road to recovery is beset by one relapse after another.

Although the set is simple, the opera is propelled by scenic projections and a compelling use of lighting and sound effects, thanks to light designer Dan Weingarten, video designer Hana S. Kim, and sound designer Bob Christian (the company’s artistic director, Andreas Mitisek, is credited with stage direction and production design). 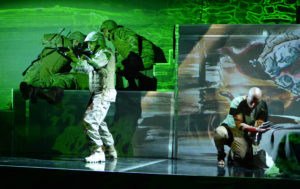 An American death in Iraq. Photo by Keith Ian Polakoff

In other words, the audience is immersed, visually, and also embraced by the score, which took its cues from the iPod playlist that Ellis had with him while in Fallujah, as well as Middle Eastern music that Marines may have heard while in Iraq. The result, though, is entirely Stokes’s, and it also reveals his own roots in rock and roll.

The small but lively Long Beach Opera is again under the direction of the talented Kristof Van Grysperre.

Heather Raffo has crafted a fine libretto, although this writer was not able to understand most of what was sung. Perhaps the acoustics of the spacious interior were partly to blame, even though the voices of the singers were amplified. There are no supertitles, in case you’re wondering. And so, speaking only for myself, I was unable to catch many of the subtleties.

At any rate, Raffo has depicted the pain and suffering on both sides of the equation, that of the soldiers sent overseas to fight and that of the Iraqi citizens who were often caught up in a scenario that was straight out of Sartre and other existentialist writers.

The other U.S. Marines in Philip’s platoon are portrayed by Todd Strange, Gregorio González, and Jason Switzer. They prowl the stage in their battle fatigues, wearing helmets and carrying rifles. There is an Iraqi mother, Shatha (Ani Maldjian), and her son, Wissam (Jonathan Lacayo), in addition to Kassim (Zeffin Quinn Hollis), an Iraqi sniper. The interaction of these varied characters is really at the heart of the opera, and of course tragedy is the all-too-familiar outcome. 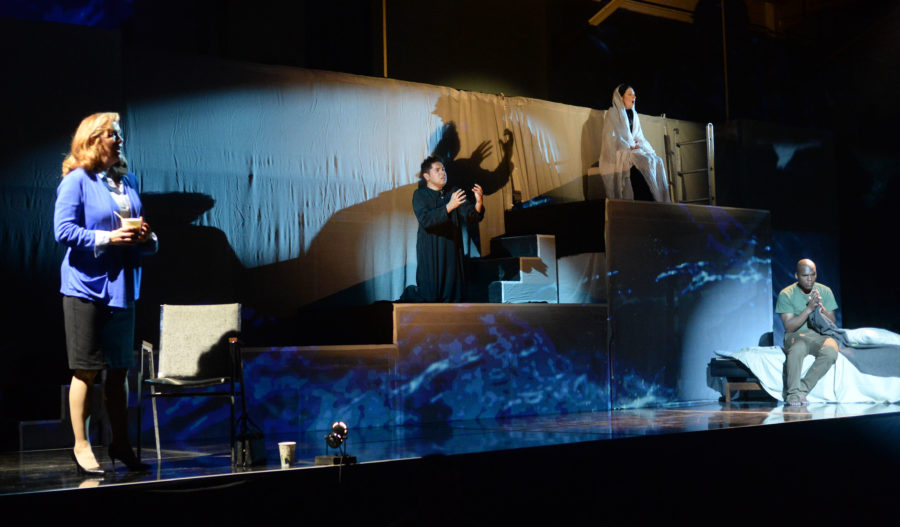 There is much to praise in “Fallujah,” and ultimately the work is about healing and wanting to bring attention to the reality of post-traumatic stress disorder, which affects thousands, if not millions of people, no matter what side of the conflict one is on. The actual war, for many, is just the first part, and the second part can have lasting repercussions.

Because opera is a collaborative effort, it is also one of compromise, and while “Fallujah” is jolting and compelling (apparently the first opera to tackle the war in Iraq) it also shies away from ruffling too many feathers. That is to say, it doesn’t seem to address the fundamental reasons of why the U.S. invaded Iraq in the first place, nor does it dare to put U.S. combat personnel in a bad light. Imagine if we’d been given an opera not about healing but about Iraqi anger with no apologies? Do we need a moral or a positive note on which to center such a work? After all, Iraq was invaded, not the United States, and what the U.S. military didn’t destroy it allowed to be destroyed by opening the cages of anarchy. What if the opera had ended with Iraqi insurgents or freedom fighters (your pick) pointing their weapons at the audience and holding all of us accountable? Now, wouldn’t that have been something!