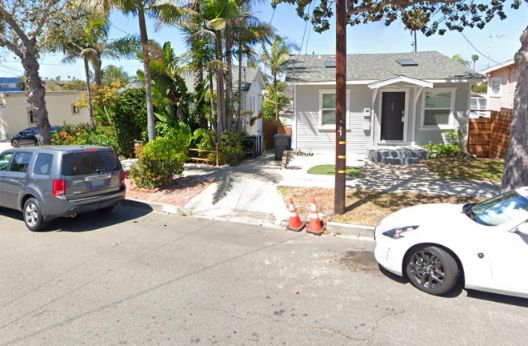 The former driveway apron used by the Reed family, marked with orange cones. The apron was removed to comply with city ordinances. Google Maps image.

The Redondo Beach City Council has pulled back on its solution to help a family with a disabled daughter that lost the driveway apron used to help the daughter in and out of the family van. The council plan, which would have introduced two handicap-permit-parking-only blue curbs on the same block, was stalled when family patriarch John Reed object to the plan.

“I got an email the next day that the resident didn’t want it,” Mayor Bill Brand said during the Tuesday night meeting. “His family said the blue curbs just weren’t going to help them.”

Last year, the Reed family learned that the driveway apron they had relied on for 22 years was disappearing.

Kelly Reed suffered a traumatic brain injury at 19 years old, was in a coma for years, and has very limited speech and mobility, relying almost entirely on her family to move about. With the apron, the Reed family could pull up onto the sidewalk, help Kelly out of the van, and take her into the house.

The curb cut was scheduled to be removed when the Reed family’s next-door neighbors renovated their home. An existing city ordinance requires that all driveways that don’t connect to garages or “designated parking areas” be removed when renovations occur — and the driveway was shared between the two homes, with a majority of the apron and driveway on the neighboring property.

Earlier this month, the City Council approved a plan to install blue curbs in front of the home and near the home, to allow the Reeds near-direct parking in front of their homes.

But Reed took issue, arguing that the curb wouldn’t help them enough — that its placement, and the family home’s proximity to multiple businesses whose customers might use the curb, neutralizing any advantage the Reed family might have.

Tuesday night’s meeting was a relitigation of the earlier meeting, though more residents appeared to speak on the Reed family’s behalf.

But, again, staff stated that reinstalling the apron is not as easy as it appears at this point — to do so would require the city’s ordinances to be changed, as well as a state law preventing parking in front of driveways or on portions of sidewalks.

Brand made an effort to get the ball moving on changing the state law, sending text messages — mid-meeting — to local state representatives Assemblyman Al Muratsuchi and Senator Ben Allen.

But the ordinance changes that would be required to make the apron viable again would require a series of public hearings, according to City Attorney Michael Webb.

That’s why Council members Christian Horvath and Laura Emdee appeared to be in favor of the blue curb solution, which Brand suggested might be a stopgap at the earlier meeting.

After Emdee made her pitch to the Reeds to retain the temporary solution, Brand flatly asked Reed if he wanted the curb. Reed flatly responded “no.”

Emdee immediately protested that characterization, saying that Brand was putting words in her mouth — and when she would not stop arguing with Brand over his comment, Brand called for a five-minute recess.

The tension between the two kept up throughout the item and to its end, shortly after Councilman Nils Nehrenheim made his motion, cancelling the installation of the blue curbs and directing City Attorney Webb to examine the relevant city ordinances and state laws. Emdee, in an effort to “temper expectations,” clarified the length of time it would take to have the ordinances changed — at least three months before Webb returns with his report, and then at least a pair of public hearings, setting a timeline of, at the earliest, five months before anything could change.

After Emdee yielded the floor, Brand stated that he “probably shouldn’t have, but gave you the floor anyway.”

The Council passed the motion unanimously.