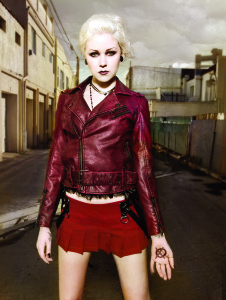 The year was 1980. An explosive punk rock scene was taking off.

The influence of British punk and new wave music had traveled half way around the world to Hermosa Beach. Local kids who embraced the movement imitated it not only in music, but also in fashion, outwardly expressing their newfound defiance against the norm.

They spent their cash on tightly-tapered jeans, combat boots, studded belts and patch-spotted jackets. They wore T-shirts that bore controversial slogans or paid homage to local punk bands, such as Black Flag and Circle Jerks, both from Hermosa Beach.

That year a small, second-hand shop called Re:style opened on the north side of Pier Ave. (now Ericson Realty) selling used clothing, handmade creations, vintage pieces, and patches and stickers that pictured punk bands with menacing expressions. In the pre-commercialized spirit of punk subculture, it offered exactly what the misunderstood youth were looking for — merchandise that any self-respecting department store would never dream of carrying.

“Punk rock created a fashion for the youth to be different,” owner Danielle Rodgers said. “It was meant to express the rebellious, teenage attitude.” 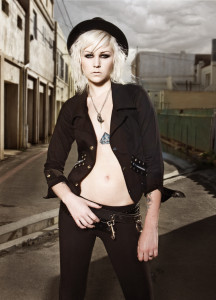 Rodgers has since seen a number of punk shops come and go and attributes the stores longevity to the fact that it has evolved with the times.

“We’ve always been alternative,” Rodger’s husband and co-owner “Rodge” Rodgers said. “We don’t just sell a bunch of punk rock stickers and T-shirts. We’ve moved on, even though we still have punk ethic. It’s not just the same thing over and over again.”

After three decades, the Rodgers have decided to sell their shop this year in order to travel back home more often. Rodge is from South Wales and Danielle from Nice, France.

Danielle came to Hermosa Beach in 1980. Her friend had recently opened Re:style and offered her co-ownership of the shop. The partners soon expanded the store (next door to include what is now Java Man) and started carrying new clothes also. Danielle met Rodge two years later and the couple bought out the original owner and moved the shop down to the old Bijou movie theater building on Hermosa Ave. They married in 1986 and moved the shop again, to its current location on the south side of Pier Ave. By the 1990s, they had ceased to sell used clothing and changed the name to Re:Style (regarding style).

“That gave us the freedom to do whatever we liked,” Rodge said.

The punk ethic is still alive in the small shop, but its fashion has evolved into a style that Rodge said is now more of an alternative mix, incorporating fashions from the 1960s, ‘70s and ‘80s. 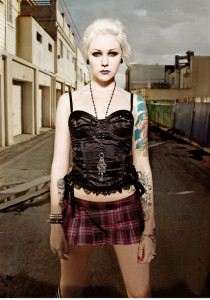 The store still carries staples of punk fashion, such as Doc Martens, Catholic school girl minis and skinny black jeans. But it’s clear the vibe is no longer the hardcore-heavily-chained-hold-it-together-with-safety-pins punk fashion of the early 80s.

Shelves are lined with black-and-white striped fingerless mittens, handbags with colorful skulls and peace signs, driver’s caps and fedora hats. The store recently started carrying “steam punk” pieces, alternative fashion inspired by the Victorian era and made out of elegant fabrics, such as lace, satin, velvet, and silk. The shop even carries clothing in baby sizes.

“You can find your bondage belt or your flower dress,” Danielle said. “We have a little bit of everything.”

The Rodgers buy merchandise in small quantities so that customers will usually never see the same thing twice in the shop and rarely will see the fashions they purchase there on someone else. The store’s ever-evolving nature keeps things interesting for its customers, many of whom have been shopping at Re:Style since it opened.

“A lot of locals have been coming here for decades,” Rodge said. “One lady who’s shopped here for years came in with her grandkid to buy baby tees the other day.”

The Rodgers hope that whoever buys Re:Style will continue its tradition of offering hip, hard-to-come-by alternative fashions.

“The last 30 years has been good,” Danielle said. “This place is sort of off the beaten track. We hope someone will understand that’s what this shop is all about.” B