“Flee” – But not from this [MOVIE REVIEW] 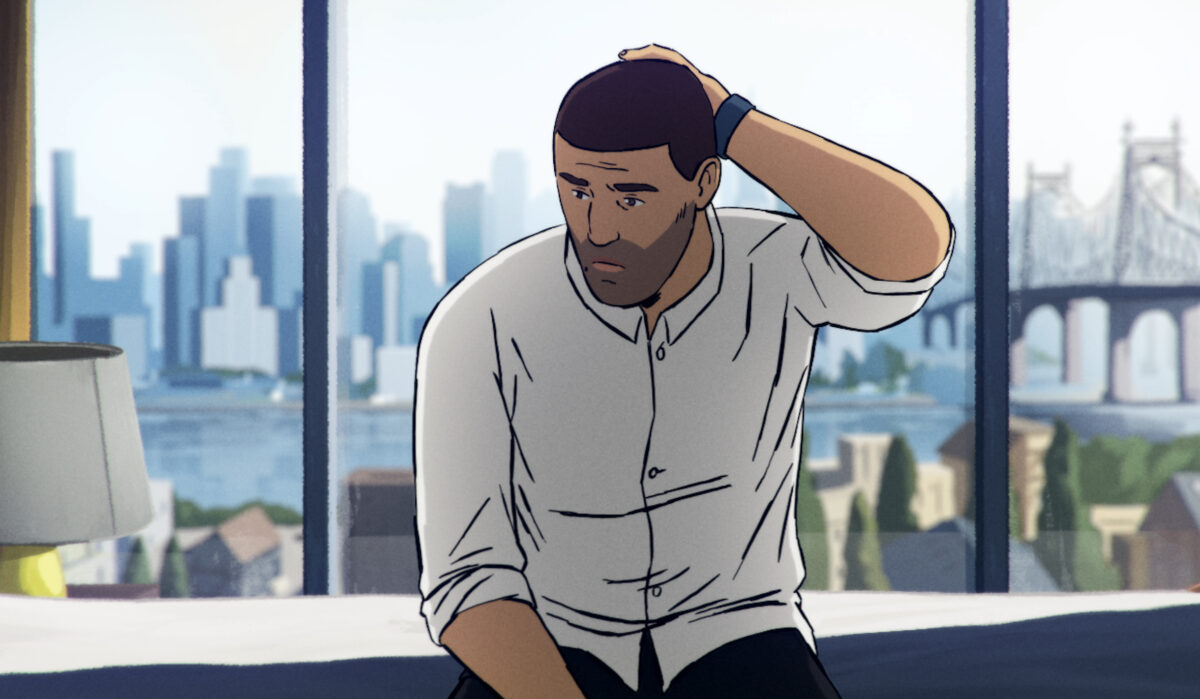 “Flee” is that rare, unique, almost indescribable film that defies category. Conceived and directed by Jonas Poher Rasmussen to tell the journey of his high school friend Amin Nawabi (pseudonym) from war-torn Afghanistan to Denmark, he uses animation as his documentary medium. Amin, a very private, thoughtful, accomplished adult has, up to this point, never recounted the story of what was sacrificed during the many harrowing stops he and his family made so that he could escape.

Rasmussen, an experienced podcaster, used an almost psychiatric approach to drawing out Amin’s story. The harrowing stops and payments to traffickers, the loss of family, the lies that were told to protect everyone, the otherness that grew within him as he learned to hide everything about his identity and his sexual orientation all took an enormous toll on what had been his concept of home and self. It took Rasmussen several years of one-on-one interviews to unravel the threads of Amin’s story. The use of 2D animation intercut with archival film footage allows Amin the distance he needs from this personal subject while, at the same time, drawing the viewer in closer to the situations. The animation both eases the flow of the storytelling and creates a bubble around the characters and their plight.

Amin, his sisters, brothers, and parents lived a comfortable middle-class life in Kabul until the Soviet takeover of the government. Amin’s father, judged a danger by the new government, disappeared overnight along with 3,000 others. During the interminable war against the U.S. funded Taliban, all boys of a certain age were conscripted and many died. Amin’s oldest brother, more fortunate than most, found his way to Sweden. Despite his meager circumstances, he sends money in hopes that his family can join him. But the money is only enough to get them to Moscow on a tourist visa in a classic out of the frying pan into the fire scenario.

Life in post-Communist Russia is dire. The police shake them down, their visas have expired, there is little food, they have no viable means of support, and the avenues of escape are slim. Hopelessness is all Amin knows. Various attempts to leave using traffickers are unsuccessful, expensive, and damaging, both psychologically and physically.

But eventually the teenage Amin is secreted out and arrives in Denmark, applying for refugee status under false pretenses. He has been instructed to say that his entire family is dead and that he is alone. The burden of this lie and the growing shame he feels about his repressed homosexuality eat away at him. He buries himself in studies, a means to cut himself off from deeper human contact. It is to Rasmussen that he reveals the lies that brought him to Denmark; lies that allowed him to keep his refugee status but kept him from the rest of his family, now living in Sweden.

Amin, now an adult with the offer of a postdoctoral position at Princeton, must try to open himself up to the man he would like to marry. He trusts his lover but still doesn’t trust himself.

The use of animation to tell this true story was a counterintuitive choice. On one hand, the animation creates an unreal world out of a real life horror. On the other hand, it makes the story more accessible both for the audience and for the storyteller, Amin, who has difficulty reconciling the threads of his life. The two dimensional aspect of this graphic novel style animation grounds the story in the past and present without a glimpse of future. It takes us along with Amin as he makes this painful journey of self-discovery. That the animated Amin spends a great deal of time on a couch as he talks to Rasmussen heightens the psychological aspects of this narrative.

In Dari, Danish, and Russian with English subtitles.

Opening Friday December 3 at the Landmark Theatre. Coming to the Laemmle Theatres in January.