Restaurant owners look down the road for the next dining offramp 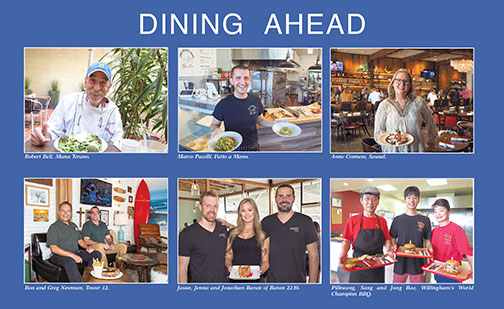 From top left, Robert Bell of Mama Terano, Marco Pacelli of Fato a Mano, Annd Conness of Sausal, Pilhwang Bae and family of Wilingham’s, Jason, Jenna, and Jonathan Baran, and Ron and Greg Newman of Tower 12.

“Everybody I know in the business is thinking about what to do before we reopen and how we can make money once we do,” said chef Robert Bell, owner of Mama Terano in Rancho Palos Verdes. “It’s almost comforting to know that none of them know more than I do. We’re all on a level playing field, because none of us have ever been in a situation anything like this before. Nobody knows what the rules will be, or when they will go into effect.”

One of his other comments gave an object lesson on how quickly the dining scene is evolving. Bell said every restaurateur was figuring out how to get more outdoor seating, and said he suspected many would put tables on sidewalks and see whether anybody decided to stop them. Within two hours of that comment came word that the state and county plan to relax restrictions on outdoor dining, including on sidewalks.

Anne Conness, owner of El Segundo’s Sausal, believes patio dining may not only be subject to fewer restrictions, but will be more popular with customers.

“Dining in outdoor spaces is going to be more popular, whether or not customers have to. Even with good air circulation, people like the feeling of not being enclosed.”

She expects that when diners do return it will be a different environment, both inside and out. “I’ve been looking at pictures from Asia, because they reopened first. Based on those, I expect we’ll see alternating tables blocked off to accommodate 25 percent of the people they’d usually have. They make it obvious with caution tape.”

Asked whether this means we may soon see people selling designer caution tape, Conness laughed. “Logos. Since customers have to see it, somebody will sell advertising on it.”

Ron Newman, who co-owns the Sharkey’s restaurants as well as Tower 12 and Palmilla in Hermosa Beach, pointed out another consequence of the reduced capacity.

“It’s not going to be the same experience that it was before, and that doesn’t just mean that tables are going to be blocked out. People won’t be able to get in, because at 25 percent capacity, we will fill up instantly. Palmilla has a capacity of 110, which means that only 25 people will be able to come in at once. There isn’t any way you can do enough volume to break even on that, though you might if you do a lot of curbside and food to go.”

Like every other restaurateur contacted for this story, Conness was also skeptical about how many restaurants could stay open with three-quarters of the tables empty.

“Before this happened, if you looked at the dining room and saw one table that stayed empty on a Saturday night, you knew you’re close to not making your margin. If we’re only allowed to seat 25 percent, we’ll have to make changes operationally in order to do it. That will mean we can’t bring back our wonderful servers, and we may have to have guests do app-based ordering at the table.”

“We’re not going to be able to hire back all the good people we had, because we’re not going to be able to use them. The PPP loans that the government is giving don’t need to be repaid if you keep all the staff, but there’s no way we’ll be able to do that. You have to have full employment by the end of June, and it’s almost the beginning of June and most of our places aren’t even serving. We’ve opened Tower 12 and Palmilla with general managers and kitchen managers running the places, because we’re paying them anyway. If the government had given us four or five months to have our staff back, that might be reasonable, but instead we’re going to have another debt payment on top of all the ones we already have. Maybe they’ll wake up and adjust it, I don’t know.”

Jonathan Baran doesn’t have as many options as some other restaurateurs because of the small size and indoor-only seating at his Baran’s 2239, in Hermosa Beach.

“We were told that if we want to open all of our tables, we will have to put plastic barriers between them. I can see the reasoning behind that, but what happens if you have a family come in and they don’t fit at one table? Under normal circumstances you can push two together. It also sounds like the state is saying we have to use disposables for everything, and try to imagine what that would be like in a fine restaurant. It would not only change the experience, imagine the river of plastic cutlery going into landfills. We’re trying to figure out how to make things as close as possible to the way they were while adjusting to the situation on a day to day basis.”

Baran’s restaurant and Bell’s Mama Terano are both stylish places that have been doing an unexpectedly high volume of takeout business. Bell estimated that he’s doing 75 percent of his previous volume with only 50 percent of the staff, and reported that he has given his remaining employees a raise. He said when the restaurant is again available for dining in on even a partial basis, he might experiment with strategies to keep that to-go volume up.

“I’ve toyed with the idea of separate prices for dining in and to-go orders, because the costs are different, though there are expenses for takeaway containers. I use quality stuff that costs about two bucks each, though somebody who uses cheap styrofoam ones won’t even notice the cost.”

Increasing takeout business hasn’t been as much of a problem for restaurants that already sold most of their food to go. Some report that business has been good, others say things are steady or even slightly declining. Marco Pacelli at Fatto a Mano in Redondo Beach, which usually seats only 10 people, says business has been steady.

“Business is about the same as before, but the balance has changed. I’m doing more dinners and fewer lunches, and selling more fresh pasta and sauces for meals to make at home. I am making kits that people can assemble in their kitchen. I am also adding items to the menu I know will travel well and will probably take off some of the ones that are really best when served straight from my kitchen.”

Willingham’s Grand Champion BBQ in Redondo is another operation that you might expect to be flourishing, but owner Pilhwang Bae says things have not been going as well as usual.

“We did a lot of corporate and event catering, but that business just doesn’t exist anymore. We’re also having problems because the cost of meat has risen so high because of processing plant closures, so I had to raise prices. There are other problems too — I’m out of two of my sauces because deliveries are slow. As things are right now we’re doing okay, but making less food and opening fewer hours.”

At another family-owned mini-eatery, Thai Express on Artesia in Redondo, Kandit Phoyom said they were doing well but hadn’t seen a huge surge in business.

“We’re getting some new customers, because people are tired of just getting the same things from places they’ve always gone to. There is a lot of takeout businesses out there, but on the other hand there are also a lot of restaurants that never provided takeout before, bu do now. More business, but also more competitors.”

One of the new competitors in the takeout field is Conness’s Sausal, which has rebranded their takeout operation as Sausalito and is offering mostly tacos, burritos, and bowls. It’s too soon to establish how well this will work but early results are positive, and it may signal a long-term shift.

“What we may do is keep the Sausalito menu for to-go orders, and when we reopen the room we’ll offer more of the Sausal menu that people know and love. That will mean we charge more for dine-in, because the items are more intricate — they’re not burritos. It’s one of many changes. This whole thing is turning the idea of hospitality on its head. We want to talk to people at our tables. Running a restaurant is incredibly social. It’s in every fiber of our being as restaurateurs, but now we’re going to have to think differently. How do we create a valuable experience for our guests without delivering that social aspect, that hospitality, but leave our guests happy they came in. I don’t know the answer yet, but people who figure it out are going to do well.”

Newman is also searching for answers that will work for the different layouts and demographics at each of his eateries.