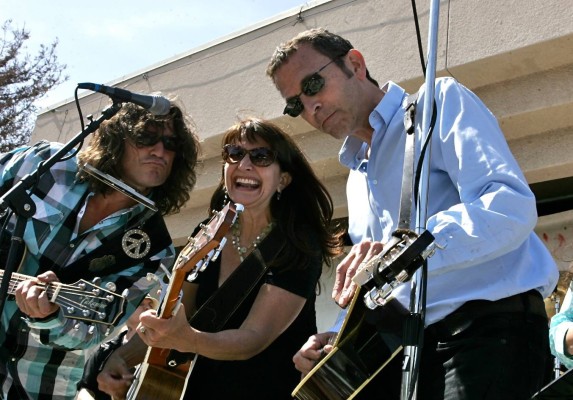 It began in 1990 as a freeform jam in tribute of Bob Dylan at the Hermosa Saloon. In the following years, musicians and longtime friends Andy Hill and Renee Safier continued the tradition in their own backyards, at parks and at Anthony’s in El Segundo.

Hill, whose first job in L.A. was installing alarm systems, spent long shifts memorizing Bob Dylan’s prolific lyrics. At the end of an eight-hour day, he’d have an 11-verse song like “Hurricane” memorized. A pure labor of love, he says.

“I was always an obsessive fan,” says Hill. “The first time we did this, we didn’t really have to work that hard to put together a whole night.”

This Sunday is the 25th annual Dylanfest, which has evolved to all-day outdoor festival and costume party at the Torino Plaza of the Torrance Cultural Arts Center. Safier, Hill and their band Hard Rain play as part of a 10-piece house band, which includes a horn section and multi-instrumentalist Marty Rifkin, a renowned studio musician whose rap sheet includes work with Bruce Springsteen, Elton John, Jewel, Glen Campbell, Hans Zimmer, Weird Al Yankovic, and most recently, Beck.

The lineup boasts some 60 other musicians, including bands like Bellylove, The Catalina Kings, Calico the Band and Jack of Hearts as well as solo artists Dave Crossland, Karen Nash and James Lee Stanley. Drummer Nelson Bragg, who plays with Brian Wilson’s band, will also join in.

From noon to 8 p.m., these musicians will perform around 65 songs from the American folk musician’s prolific body of work, which ranges from 464 to 2000 songs “depending on where you look,” says Hill, who notes that after 25 years the band is still making its way through all his songs. The setlist will include perennial favorites like “Blowing in the Wind” and “Like a Rolling Stone” as well as his lesser-known tunes for the diehard fans.

“The songs are so enduring because so many of them are multilayered,” Safier says. “You discover new things about them every time you hear it or play it.”

“Your repertoire isn’t complete until you know at least one song by that guy,” Hill adds.

To mark the25 year milestone, this year’s Dylanfest has some surprises in store, including a burlesque re-enactment of Dylan’s famous music video for “Subterranean Homesick Blues.” Plus, prizes like restaurant gift certificates, clothing items and CDs will be given out between acts.

Safier and Hill met senior year at the University of Denver, where Hill’s then-girlfriend took him to see Safier’s three-piece acoustic trio. Hill began playing drums for the group, and it developed into all-day concerts named “Tower Jams” after the name of their dormitory. The two parted ways after graduation, with Hill moving back to Vancouver. In 1985, the two serendipitously reconnected in Los Angeles. They founded their band Hard Rain soon thereafter.

Like Dylan, the duo are prolific musicians. Between the two, they’ve released 13 independent CDs, most recently a 12-track album called Back to Georgia in which the duo covers country classics like “Folsom Prison Blues” and “City of New Orleans.” They’ve swept up L.A. Music Awards’ “Americana Group of the Year” and “Best Duo/Group” for the International Acoustic Music Awards.

“When you look back at our life, sometimes everything looks preordained or planned out,” Safier says. “Just this very meticulous map that takes a turn here, a turn there and you’re at the next destination. That’s kind of how we got here.”

The 25th annual Dylanfest takes place Sunday, May 3, from noon to 8 p.m. at the Torino Plaza of the Torrance Cultural Arts Center. Tickets are $30 at andyandrenee.com and $35 at the door. Additional information is available at andyandrenee.com or by calling 310-346-9383.