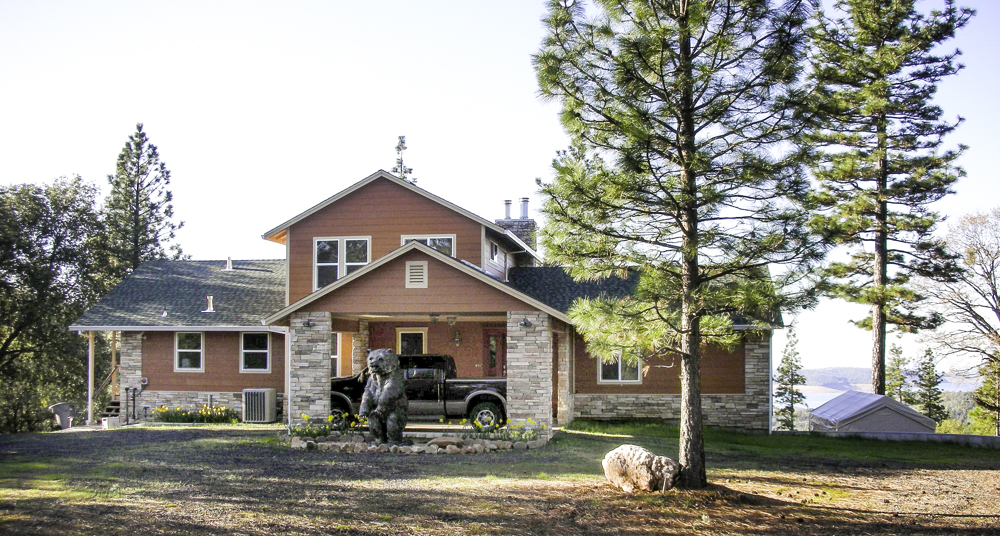 Jody and Bob Bitchin moved from their boat in King Harbor to this home in Berry Creek, overlooking Lake Oroville 15 years ago. Photo courtesy of the Bitchins

At midnight last Tuesday, our front door with the stained glass window of a sailing ship blew open.

Swan rushed in and said, “We have to get out of here, the wind is shifting.”

Swan lives in a small cabin on our 40 acre property in Berry Creek, overlooking Lake Madrone. She helped her husband (my best friend, now deceased) customize our home.

My wife Jody and I weren’t worried even though we’d received a mandatory evacuation notice. The winds were blowing in the other direction. It looked like the Bear Fire would not get closer than a few miles. The fire had started two weeks earlier at the top of the Sierras, near Quincy, 35 miles away. 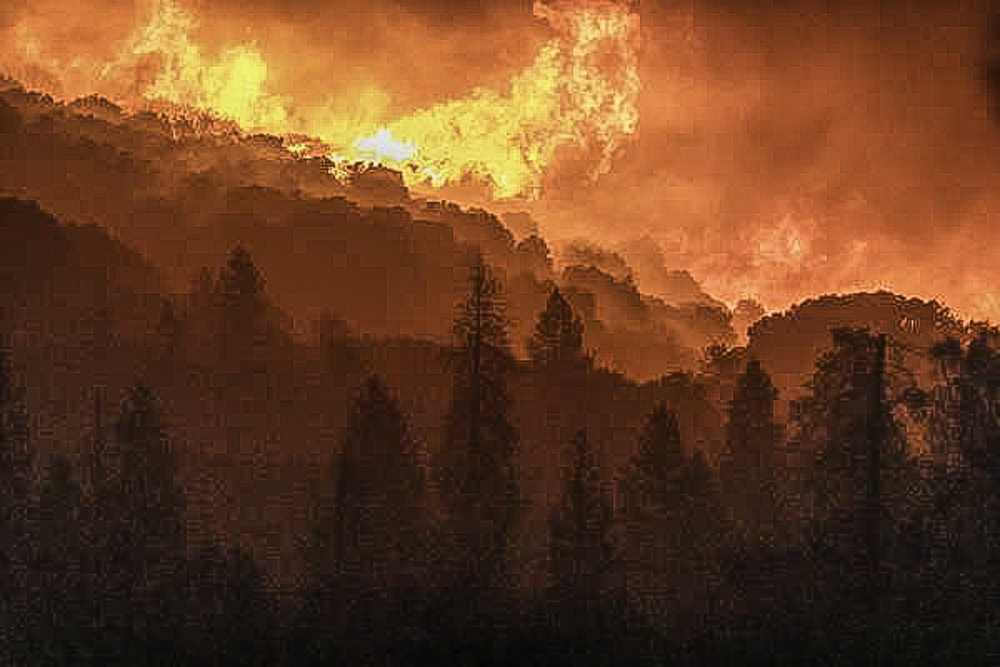 The Bear Fire advancing on Berry Creek last Tuesday. Photographed from the Bitchins’ back portch. Photo by Bob Bitchin

I turned on a news channel and sure enough, the wind had changed directions. The fire was heading right for us.

Our memories of the Camp Fire that destroyed Paradise in 2018 were still fresh. Paradise is 10 miles away. The Camp fire stopped two miles from our home.

I grabbed a couple of days worth of clothing. Then I could not move.

Jody and I run Latitudes & Attitudes magazine out of our house. We started it 23 years ago on a boat in King Harbor. All the back-issues, the T-shirts and hats, not to mention the  books I’ve written over the past 50 years were here.

I have a large knife and sword collection, a large gun collection, and souvenirs from our 10 year sailing around the world aboard Lost Soul. My ‘05 Harley Davidson Heritage Softail Classic, which I had just added custom bars to, was parked in the garage.

The red glow behind the trees grew more intense. 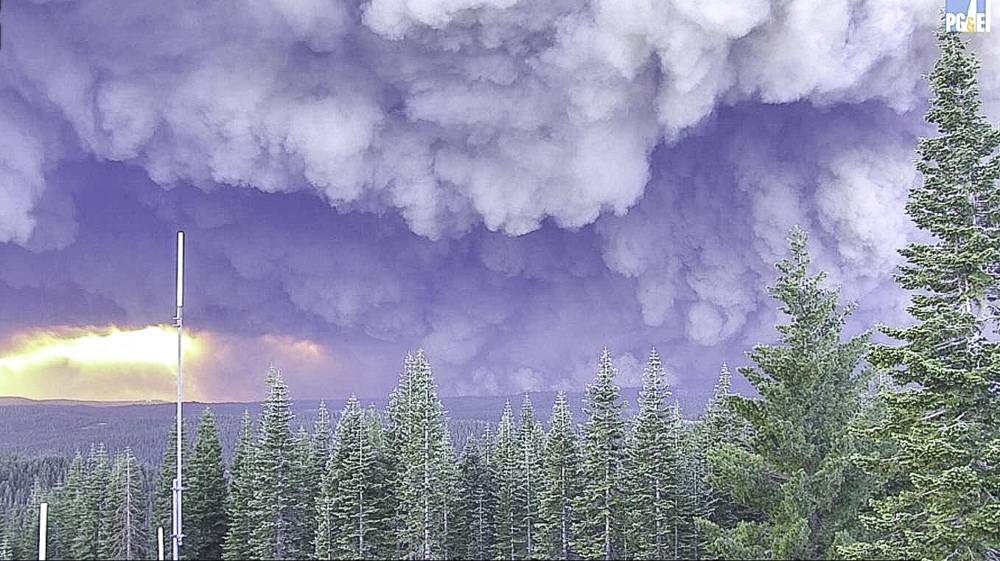 What the hell do I take? Nothing. Just the clothes, Jessie and Katie and our medicine (hey, we’re old). Jessie and Katie are our Toyger cats. I realized the only important thing was to get them and us off the mountain. On the way out the door Jody grabbed a scrimshaw sperm whale tooth from our sail in the Azores and a bottle of Pusser’s Rum signed by its founder Charles Tobias.

We raced down our half-mile long gravel driveway in our white “show van,” an 11 year old Ford E250 we use to truck our boat show gear around the country. We hoped Jody’s MKX Lincoln, my King Ranch F250 Diesel and everything else we had to leave behind would be okay.

Berry Creek is a scattering of 1,200 people northeast of Oroville. The road through Berry Creek is a small, two lane highway (Hwy. 162) leading to the Bidwell Bar Bridge. The only way off the mountain is over that bridge. Police were escorting cars across as fast as they could.

We crossed at 12:25 a.m. Wednesday morning, shortly before the bridge was closed by the approaching fire. Over 100 cars were stuck behind the fire lines and diverted onto a dirt road down to the lake, in case they had to jump in the water.

I know this because Swan, who was a little behind us, was the first to be stopped at the bridge. She was finally allowed to cross at 6 a.m., after being led by fire crews through trees burning on both sides of the road.

The nearest town that was safe was Oroville, where my old friend Chaz Gaddie lives. Chad used to own Coyote Cantina in Redondo Beach. He was out of town but told us to “break into” his place.

Jody and I spent the next 36 hours in his living room watching reports of the fire burning through Berry Creek. We couldn’t sleep.

At some point, I remembered I had a little, $25 security camera pointing out our third story, cathedral window. It was not connected to our security system, which had stopped working. It was action activated and worked on wifi. I looked on my iPhone. The little camera had been activated.

The video was time stamped 10:20:14 a.m., Wednesday, September 9. It was seven-and-a-half minutes long and started with a small flash to the right of the house. Within three minutes the forest in front of the house was ablaze. The flames shot 100 feet in the air creating a wind that made the trees in front of the house shake like they were in a hurricane. Embers streaked past the window like tracer bullets.

A reflection in the window showed the trees behind the house were also burning. Though encircled by flames, the house appeared to have been spared when the propane tank exploded and the camera went dead.

The next day, two of our friends from the hill who were working on the fire went to our property. They sent us photos. 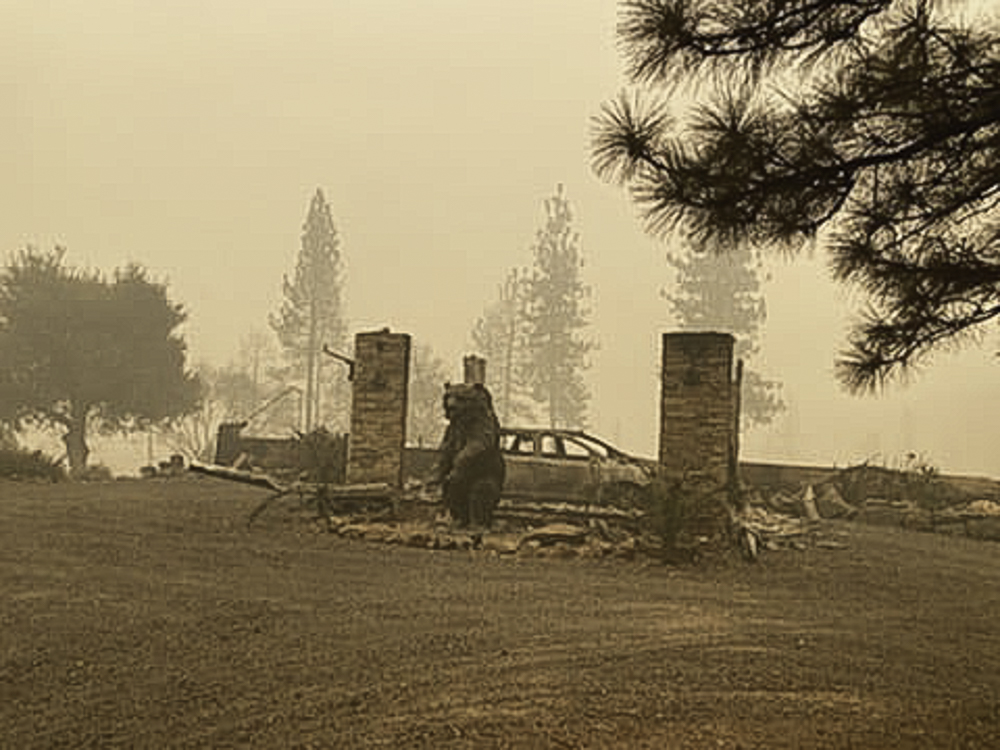 The Bear fire spared the 7-foot tall bronze bear Mad Max, but little else at the Bitchin’s home. Photo courtesy of the Bitchins

Mad Max, our 7-foot-tall bronze bear was still standing guard, telling us to come home. On either side of him were two flagstone pillars that had supported the carport in front of the house. We had left Jody’s MKX Lincoln parked there. It was a burned out shell. The house behind it was smoldering rubble. Not even the chimney was standing. The tool shed we were building didn’t have a roof, but it survived. My King Ranch F250 Diesel and the brand new 2020 Honda Pioneer we’d just bought a month or so ago looks like it may have survived. Our pump house was still standing, and they said our generator was okay, though not running. Oh, I almost forgot. My gun safe buried under a ton of ash seemed to be okay.

It’s going to be hard to go back up the mountain.

We had 75 years of memories up there. Fortunately, they are also up here, in our head.

“It is in dire straits that a person’s true self is revealed.” 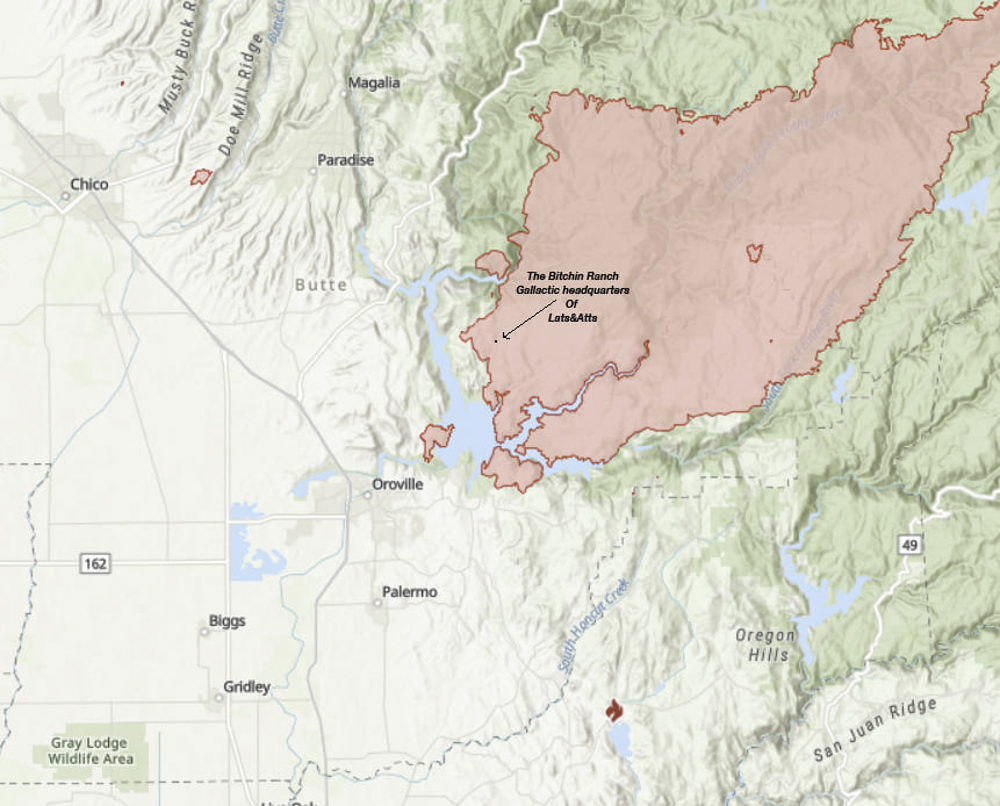 The Bear Fire started in the High Sierras, near Quincy, and over the next two weeks moved 35 miles west, meeting up with other fires along the way and becoming known as the North Fire Complex. Image courtesy of the Bitchins

Editor’s note: According to Cal Fire an eight-mile long flank of the Bear Fire engulfed Berry Creek and several neighboring towns last week. 132 homes, 36 commercial buildings and 59 outbuildings were destroyed. At least 15 have died from the fire and 2 are reported missing.

Since its start on August 18, the North Complex Fire, which includes the Bear Fire, has burned 264,000 acres. On Monday it was 38 percent contained.

The security video of the fire bearing down on the Bitchin home may be viewed on YouTube at https://youtu.be/58x9Z1IM4Y0.

Pyrate Radio, where Bitchin has a weekly broadcast, has established a GoFundMe page, to help the Bitchins resbuild: https://www.gofundme.com/f/9y4r9q. ER