Foxes rest in the sand at 8th Street in Manhattan Beach, after running along the water’s edge in Hermosa Beach. Top photo by Frank Saverino. Bottom screen image by Rachel Whitaker.

A pair of foxes was spotted sun-bathing and along the water’s edge in Manhattan Beach and Hermosa Beach on Tuesday morning.

By early afternoon, videos and photographs of the orange furred creatures were making the rounds on social media.

Chris Druliner and his girlfriend, Rachel Whitaker, saw the foxes running on the beach near 21st Street in Hermosa Beach around 7:30 a.m., Druliner said.

“It’s my girlfriend’s birthday today so we were just taking a little morning stroll on the beach,” Druliner said. “They passed us twice and then just kept running.”

Whitaker videoed the foxes on her phone as they ran off, with a lifeguard truck trailing close behind.

“I’ve never seen foxes there,” Whitaker said. “It looked like they were living their best lives. It was definitely an unexpected birthday surprise.”

Manhattan Beach resident Frank Saverino saw the foxes sitting in the sun a little before 8 a.m., near the 8th Street lifeguard station. He said he’s been living in Manhattan Beach for six years and has never seen a fox on the beach.

“Now I have seen a lot of foxes, but usually playing volleyball,” Saverino joked. “I figured maybe they were scared and got a little lost. Hopefully they found their way back home.”

It’s uncertain where the foxes ended up after their 15 minutes of fame. Los Angeles County Lifeguards could not be reached for comment.

Although rare, foxes have been seen in other parts of the Beach Cities, according to city public relations representative Laura Mecoy.

“There are a lot of animals that live among us,” Mecoy said. “We always tell people to keep your trash cans covered and sealed up so that raccoons, skunks and foxes cannot get into them. It’s not good for them to eat garbage.” ER 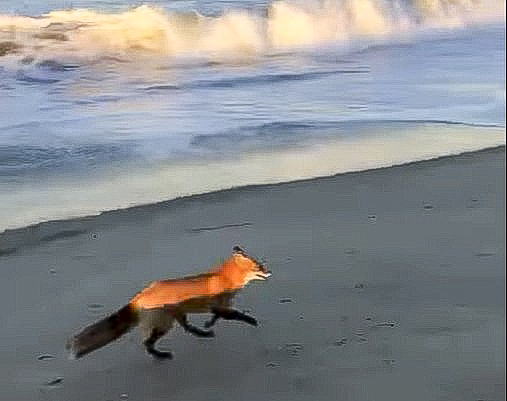