Fritz Coleman “On the Fritz” in Hermosa 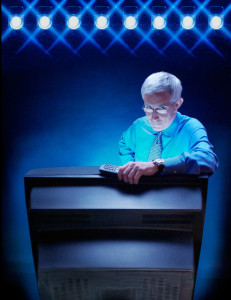 Weather forecast for the next two weeks in Hermosa Beach:
Funny.

Fritz Coleman, after 26 years as the premier precipitation prognosticator at NBC4 television in Los Angeles, makes viewers believe he knows what’s on the horizon. In this particular case, he’s promising calm skies, light traffic and a couple hours of laughter with a one-man show beginning Jan. 19 at the Hermosa Beach Playhouse entitled “On the Fritz – An Evening With Fritz Coleman.” Can you guess who’s starring?

Comedy and weather make for a perfect marriage. What can be funnier than driving on a rain-soaked, oil-splattered San Diego Freeway during a February downpour? I wet myself laughing whenever I see a jackknifed 18-wheeler on its side spilling a load of rutabagas across five lanes.

Fortunately, Coleman recognizes the humor in life, even given his Aeolusian on-air schedule. (Aeolus is the Greek god of winds, just to save you a Google search. As omnipresent as Coleman is on our TVs, it would be presumptuous to compare him to Zeus, the god that’s really the weather boss. Thank you, James Joyce.)
“I’m not only here in L.A.,” says Coleman. “About six months ago my responsibilities expanded. Now I’m the weekday weather forecaster at NBC in San Diego. I’m doing two stations, five days a week. It’s about a 12-hour day.”

San Diego? Can’t you just put it on a loop and run it 360 days per year? You know, high 77, low 59, sunny…
“I say that San Diego weather is like L.A. weather on Prozac. Thank god it’s not a whole different climate to worry about,” says Coleman. “I’m just very thankful to be employed in my kind of work.”

Fritz broadcasts the San Diego segments from the Channel 4 studios in Burbank, so he’ll not likely be required to negotiate renegade rutabagas in the rain next month.Stand-up and cheer
Christmas Day 2009 marked 26 years with NBC4 for Coleman. Prior to his time in L.A., the native Philadelphian worked in radio “for about 10 years” and served his country by broadcasting on Armed Forces Radio and TV during a stint in the Navy.

Coleman’s stand-up comedy and weather forecasting careers have been as inseparable as January cold pressure fronts and snow in Ohio.

“I did my early stand-up mainly in jazz clubs around central and western New York state,” says Coleman. “When I was in the radio business, I was an on-air personality there and part of the responsibilities of the job was to go out to these music venues and be the emcee for the night. It was a great way for the station to promote itself.
“I got to host in a couple really interesting jazz rooms and began to write material for myself as part of my emcee responsibilities. After a while I developed a little bit of a following because of the comedy I was doing before the jazz shows… Jazz audiences are very forgiving, open minded, so regardless of how bad you were, they made you feel comfortable. It was a great place to incubate my talent. Then, the owner of this one jazz club said, ‘We’re going to give you and some of the other comedians your own night – Tuesdays.’ So, we built a night that eventually resulted in sold-out shows.

“Then, I got a little full of myself and thought, I’ve conquered Buffalo, so I must be ready for the big time. I came out to California in 1980 – I had never been to Los Angeles – and arrived at the peak of the success of the Comedy Store (Sunset Boulevard). If you were ever going to do anything with your life, you had to come to this mecca. When I first arrived in L.A., I slept on the floor of a lady’s apartment. She was the only person I knew here.
“In the audience my first night at the Comedy Store were Gary Shandling, Billy Crystal, Amy Walker, and the closer of the show was a really interesting Robin Williams-type by the name of Charles Fleisher, who was brilliant. The talent was so extreme and wonderful, and I was so disheartened I literally felt sick when I left there. I thought, ‘What am I doing? I have no business being out here in this league of comedians.’

“I crawled back to my car. I thought, well, I can go home with my tail between my legs and admit defeat my first week out here, or I can stay until my money runs out… I came out here way ahead of my talent.”
But Coleman stayed and continued to perform at the Comedy Store. Then, one night in 1982, “The news director from Channel 4 and his wife were in the audience. I talked in my act about having done weather earlier in my career in radio. (Being a weather person) was totally involuntary on my part. My boss at the time literally demanded that I do it because they couldn’t find a vacation relief guy for TV and the night watchman refused to do it.

“After my show, the news director and his wife came backstage and introduced themselves. He said, ‘I know this is a weird question, but I am sorely in need of someone to do vacation relief and weekend fill-ins for weather at Channel 4. I have a weekday forecaster who hasn’t had a vacation in a year because I haven’t had a guy to back him up. Would you be interested in auditioning?’
“I thought, well, I’m making $45 a night at the Comedy Store, when do you want me to start?”

Channel 4 or bust
Coleman auditioned on Tuesday, got the job on Thursday, and was on the air the next weekend. “It was the greatest bit of show business luck since the classic Schwab’s story about what’s-her-name,” he says.
Tens of thousands of NBC4 broadcasts later, Coleman is back onstage next week in Hermosa. Not that he really ever left: Fritz has done stand-up at several L.A.-area comedy clubs and has written three one-man shows during his Southern California residency.

He calls “On the Fritz” a “compilation of stand-up and some pieces of my past… This is an evening of humor and it’s all observational stuff about getting older, life in California, news and weather and aging and raising children, the economy and all sorts of universal topics.

“I do about an hour, we take an intermission, then I come back for a question and answer period where I let the audience complain to me about the news and life. We kibitz and have a lot of fun. It can be really funny; people think they are insulting me or insulting the news business, but I tell them we’re all on the same page.
“I don’t do political humor; it’s just me being Fritz onstage… and I’m so happy to be back down here. It’s a great audience – it’s far enough away from L.A. that the whole idea of live performance is still special. There’s a wonderful open-minded accepting quality with the folks who live along the coastal area. It’s the best audience ever!”

Back to broadcasting, I asked Coleman about the situation of the local news following the ratings-floundering network experiment called the “Jay Leno Show” at 10 p.m. weeknights on NBC. We talked on Jan. 4. The following day, the New York Times reported the demise of the prime time talk show, so Coleman’s comments are 24 hours pre-cancellation rumors of Leno’s show.

“Fortunately in L.A., we’re doing okay. I know that in some parts of the U.S., it’s doing less well than others… NBC took this tremendous chance and put Jay in the middle of prime time. Well, television viewership in America is purely a matter of habit,” says Coleman. “People have rhythms in their lives, and the network asked them to change that rhythm and get into another mindset. But they also forgot the fact that the format he is using was only proven in late night. All of these things at one time is a tremendous experiment and it hasn’t been easy for him.”

A Simpler Time
Coleman is taking two weeks off from his rigorous broadcast schedule to perform at the Playhouse. Feel free during the question and answer period of the show to ask about the planting time for marigolds and if it’s advisable to wash your car tomorrow. He’s a winsome wind blowing through the South Bay to share a good time. “A couple weeks down here is really a godsend for me, believe me.”