From A Fijian Village to LACMA, via Redondo Beach 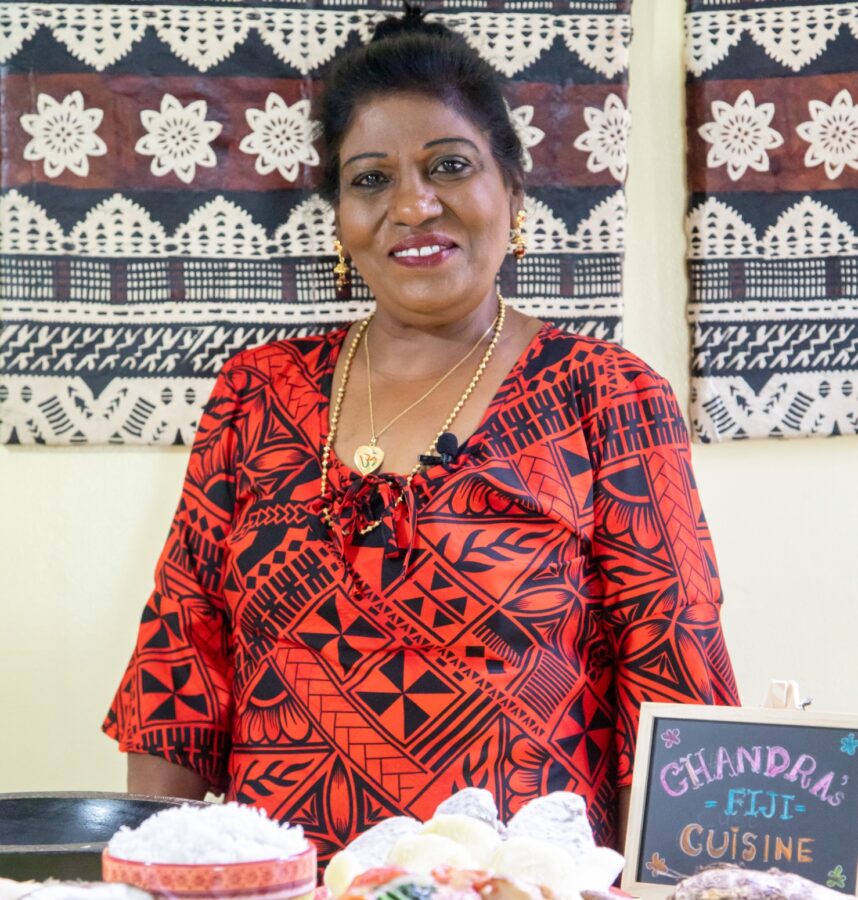 Fijian chef Chandra Williams has made a video on Fijian cooking for the Los Angeles County Museum of Art. Photo by JP Cordero

Fijian chef Chandra Williams has made a video on Fijian cooking for the Los Angeles County Museum of Art. Photo by JP Cordero

Chandra Williams did not originally dream of moving from her village in Fiji to California. The stories she had heard about the US were frightening, and she was still concerned even after moving here in 1987. A prank shortly after she arrived confirmed her worst fears.

“When I was growing up I heard America was a place full of drugs and chaos, and I was afraid of that. After I got here a friend of my sister-in-law invited us over, and he smoked a joint and ran around the house. I ran out of the house, and later I found he had done it as a joke. It was a different world altogether for me,” the Redondo Beach resident said.

The world she had known was indeed different. Chandra was born into the Indian community on Fiji, which arrived as farm laborers in the 19th century, when it was a British colony. The islands had the ideal climate for growing sugar cane, but the native people resisted working on plantations.

“The Fijians grew their own crops, caught fish, and didn’t want to work on farms, so the British brought Indians as indentured laborers and gave them a contract for five years. By that time many had married and had children, so they stayed.”

The Indian and Fijian communities were separate, but they came together in schools, and there Chandra learned the culture and cuisine of the Fijians. This included lovo, a feast cooked in a pit of coals or hot stones similar to the one known in Hawaii as a luau. As Chandra explained it, “Lovo involves wrapping chicken, lamb, roots, and edible ferns in aromatic leaves and slow cooking them for hours underground. Fijians celebrate weddings, important occasions, everything from family coming over to the Queen of England if she happens to visit, with these big feasts called lovo.”

It is possible that Queen Elizabeth enjoys lovo, because she has visited Fiji six times. Though the Indian and Melanesian communities are separate, both communities have adopted that style of cooking.

“In my community we might have lovo or their fish in coconut milk once a week, and the rest of the time my family would make Indian food. Fijians mostly ate their traditional foods, though now they are becoming much more accomplished with Indian cuisine. They make the best rotis and curries, and it’s amazing how the two cultures have come together in modern times.”

When Chandra came to California to be with her American husband, it was with ambitions outside the kitchen. She had graduated as a business major and worked as an accountant, but cooked for fun and received accolades from friends and co-workers. In 1987 she started Chandra’s Fijian Indian Restaurant, a tiny place with three tables, on Aviation Boulevard in Manhattan Beach. The restaurant was successful, but as her lease was running out she was offered a space in Downtown LA that had more potential for growth. This too was a hit, but after two years someone made a generous offer on the business and she decided to sell. A stint at a catering company called Gourmet Foods followed, with Chandra as in-house chef preparing specialty meals for airline passengers, and then she settled into a relaxed and deserved retirement.

This was interrupted by a call from the curator at the Los Angeles County Museum of Art, which had scheduled an exhibition called “Fiji: Art & Life in the Pacific.” Due to the pandemic that exhibition would open online, and they wanted to augment it with a video of traditional Fijian cooking – would she do it? She took a tour of the exhibition with the curator, and found that it evoked memories of her home country. 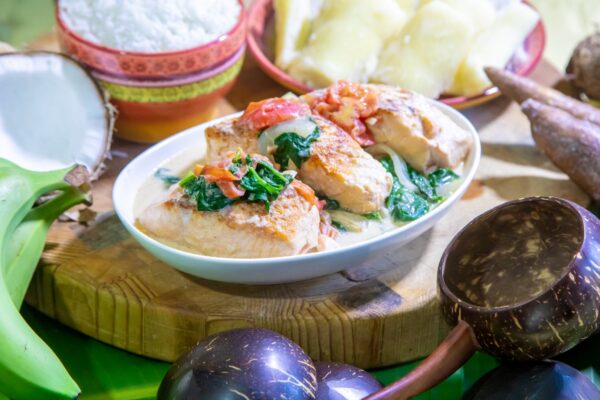 “The Fijian art at LACMA is traditional, not modern. It’s about how the first settlers got there and all their tools. It represents that [Melanesian] community, not the Fijian-Indian community. I learned how to cook Fijian items from the ladies in the village, and I tasted their food and saw how it was prepared. Fijian cuisine is not elaborate, though when cooking lovo it takes a lot of time and you have to prepare everything before you put it in the ground. In general their cuisine is roots, green vegetables, fish, chicken, and lamb, sometimes a little goat. Fish is their main protein, and they cook simply – no fancy kitchen tools, just pots and pans, though they sometimes steam things in coconut fiber baskets or banana leaves.

“When it came to the recipe for the video, I picked one that is the most traditionally Fijian, something they eat once or twice a week. It’s called Ika Vakalolo, fish with coconut cream. I wanted to show something that has a relationship to when the first settlers came, when they relied entirely on things that were from their land and sea.”

That reliance on products of their environment has been changing in recent years, as it has everywhere in the world.

“I’m in contact with my friends and family all the time, and they say the food is changing. They have fast food places now, including KFC, McDonald’s, Burger King, and pizza places. People don’t go there every day, because Fijians work hard for their money and it doesn’t go a long way, but they dine out once a week or for something special. The children like fast food, because children always do.”

There won’t be a fast food version of lovo any time soon, but the dish that Chandra demonstrated for the video can be made in minutes by just about anybody. The promotion by LACMA will be seen all over the world, and will be most people’s first introduction to this culture and cuisine. You can see the video, shot by local videographer JP Cordero, on YouTube, at this link. The recipe is on LACMA’s website here, and after you make it you can dine while viewing the LACMA Fijian exhibition online at