“Gaza Mon Amour,” at its root, is a timeless love story. Set in a place of no future and only a marginal present, people struggle just to eke out a living where actual power, in both the physical (electricity and water) and metaphoric sense is tenuous at best. The young are seemingly in two camps; ironic because everyone in Gaza is in a proverbial camp. Samir longs to escape and has given all his money to someone who may or may not smuggle him to the west. For him, it’s a risk worth taking even if he has to leave his family behind. Representing the other camp is Leila, divorced without prospects, who sees no future, just the status quo of nothingness. Both represent the Gaza of today— hemmed in by Israel and ignored by the rest of the surrounding Arab nations. Gaza is no man’s land in the most literal sense.

The elders, resigned, recognize the need to just keep going. Unlike the young, they knew a time when electricity flowed, shops were successful, and food was plentiful. But you can’t live on memories and the rent must still be paid.

“Gaza Mon Amour” is not, however, a political movie or even an overt commentary on what is happening in this tiny representation of Palestine. This is actually the love story of a man and a woman, both of a certain age. Issa, a fisherman barely making a living, sells his goods in the central market. It is at the bus stop that he spots Siham, who works at a clothing stall at the other end of the market. Neither is a beauty. Issa, a lifelong bachelor has inexplicably fallen in love with a women he has only seen from afar. Siham, dignified and proud, has never noticed him. She is very private, worried about her aimless daughter Leila, and barely makes a living, supplementing her shop wages by doing alterations. Her silence is powerful; her face speaks of years of difficult times. The film benefits enormously from the casting of international stars Salim Dau (“Oslo” and “The Crown”) as Issa and Hiam Abbass (“Succession” and “The Visitor”). 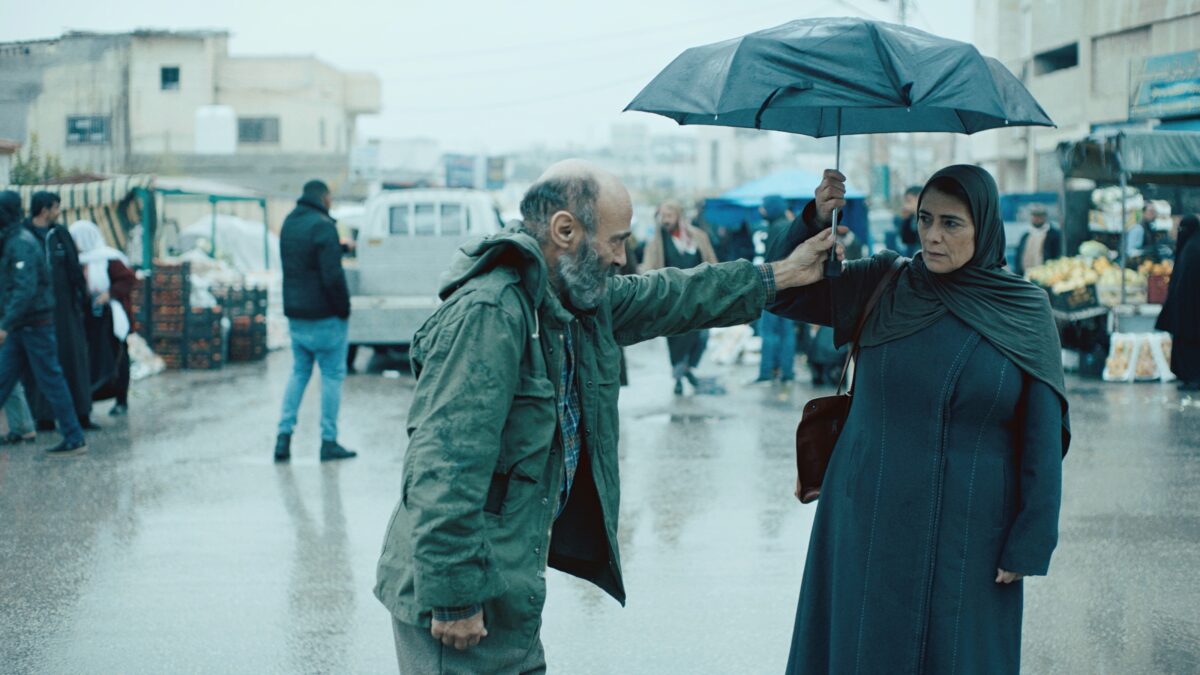 Their encounter in the rain at a bus shelter is poetic. Unremarkable for Siham, it is momentous for Issa who begins to plot his future approach. But thinking and doing are not the same. Then something remarkable happens to him that has psychological repercussions. Fishing in the sea he pulls up an unusual bounty, an ancient Greek sculpture with phallic significance. But, as is often the case, other forces appear suddenly to take away his good fortune. The police arrest him, throw him in jail, and take his treasure. Issa, already with little, recognizes the big fish swallowing the little fish but knows quite well that a bigger fish will come along to swallow his tormentor. Negotiating Palestinian politics sometimes has nothing to do with the (unmentioned) Israeli occupation and everything to do with power and the corruption it breeds.

By surviving his encounter with the police, he gains the strength and confidence to approach Siham. Neither Issa nor Siham have the delusion of happily ever after. For them, just getting along is enough and each eventually recognizes the other as a kindred spirit in pragmatism.

“Gaza Mon Amour” is not about passion, it’s about living the best way you can; it’s about the small dreams that make that existence tolerable. Issa recognizes in Siham a dignity he admires. Maybe that’s what it’s all about—maintaining dignity and pride in an anarchistic world that has no order. Issa and Siham have found a quiet refuge and created their own camp walled off from the ugliness surrounding them. Maybe happy is not the concept each seeks, perhaps it is contentment. Contentment may be within reach.

Twins Tarzan and Arab Nasser wrote and directed this feature about their native Gaza. Though at times the plotting seems haphazard and not entirely supported by events, they have created indelible characters and are filmmakers to watch in the future. Their writing and filming, hand in hand, reveal an unvarnished portrait of living under circumstances that are cruel and insurmountable, while also highlighting the small moments of triumph that propel life forward. The cinematography by Christophe Graillot is true to the conditions revealed—gritty, dirty, gloomy, and dark. It helps draw you into the world of Issa and Siham.

The fortuitous casting of Salim Dau as Issa and Hiam Abbass as Siham brings added poignancy to the dilemma faced by these characters. Each conveys that life has not turned out as they might have hoped when they were young, before Gaza was just a “strip.” But they have survived. Their faces show the miles walked under difficult circumstances. They wear their losses and occasional wins with dignity. These are truly great actors and they add immeasurably to the depth of the film.