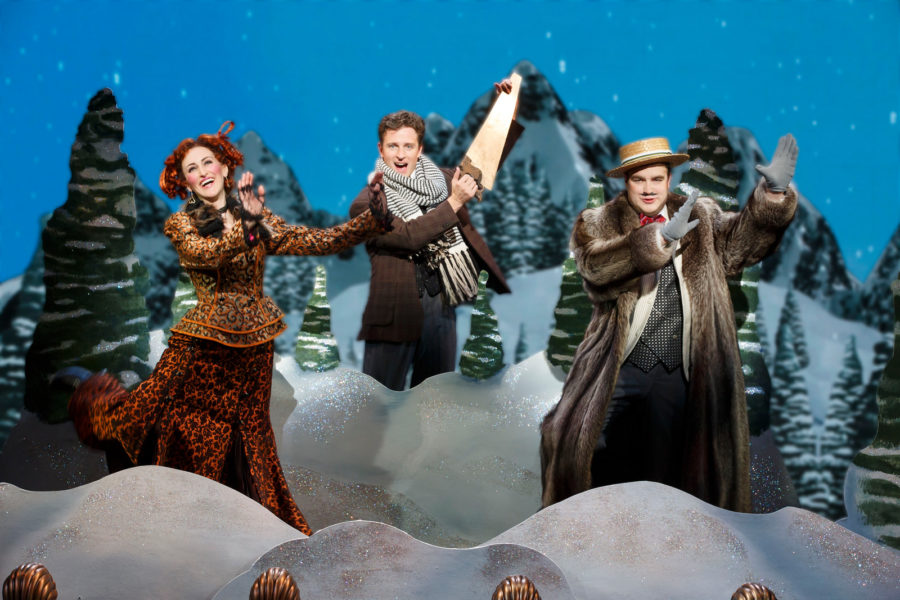 “A Gentleman’s Guide to Love & Murder” – going once, going twice

In case you haven’t gotten around to seeing (nay, experiencing!) one of the most delightful musicals of the past few years, let me make my way into the belfry so I can toll the bells that say: Last call! “A Gentleman’s Guide to Love & Murder,” winner of the 2014 Tony Award for Best Musical, packs up its bags at the Ahmanson on Sunday and moves on.

This visual confectionery shop is set in Edwardian London, 1909, and is directed by Darko Tresnjak, who did such a bang-up job on LA Opera’s “The Ghosts of Versailles.” One can go down the list and check off each box: Choreography? Yes! (Peggy Hickey); Scenic Design? Yes! (Alexander Dodge); Costume Design? Yes! (Linda Cho)… and many more. Book and lyrics are by Robert L. Freedman; music and lyrics by Steven Lutvak.

This farcical, non-stop black comedy, with its whiff of Edward Gorey in its characterizations, bears some comparison with “The Drowsy Chaperone,” “Curtains,” and even “How to Succeed in Business Without Really Trying.” One of its two leads, John Rapson, might even have one thinking Agatha Christie meets “The Addams Family.” 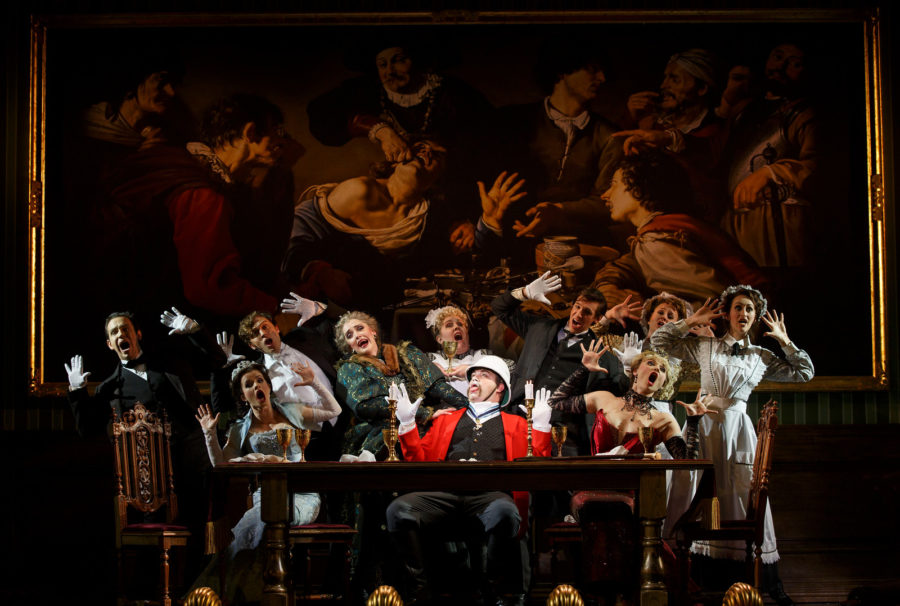 The cast with John Rapson as Lord Adalbert D’Ysquith (in bright red). Photo by Joan Marcus

Essentially, a young man of no particular merit or standing (Kevin Massey as Monty Navarro), learns that he is a relative of the aristocratic D’Ysquiths, whose mother was ostracized after she married a commoner. He is, in fact, ninth in line to the family fortune. But when he approaches the D’Ysquiths, he, too, is given the brush-off. At first through accident, Monty then realizes that he can edge his way to the front of the line by causing the death of each heir in front of him… and he proceeds to do this, by means that inevitably bring a laugh or a big wide grin.

Each of the D’Ysquiths is played by John Rapson, mentioned above, and he gives an astonishing performance, his characters ranging from the Reverend Lord Ezekial D’Ysquith to Lady Salomé D’Ysquith Pumphrey. Along with Massey’s Monty (a bit reminiscent of Chaplin’s Tramp or the actor Steve Carell), these two actors carry the show. 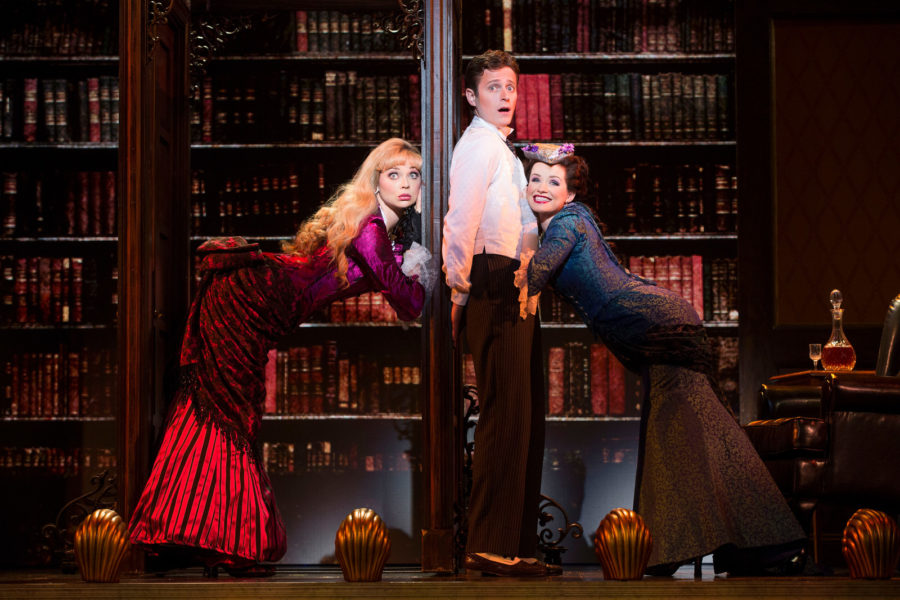 Well, most of it. The ensemble is fabulous, but especially so are Monty’s two love interests, the self-preening Sibella Hallward (Kristen Beth Williams) and Phoebe D’Ysquith (Adrienne Eller). Monty, Sibella, and Phoebe have a well-choreographed number (“I’ve Decided to Marry You”) in which a frantic Monty tries to keep each woman from discovering the presence of the other.

Monty Navarro climbs to the top and gets away with murder (and murder and more murder), or does he? The little surprises, the pacing, the clever lines and the songs…

One could go on, but you have a show to catch, if you haven’t already seen it. Or maybe want to see it one more time. A delicious production like this, it’s the reason we go to Broadway shows.