Going, Going, Gone? “Horses and Dragons” and “Vanishing Animals” at the Aquarium of the Pacific 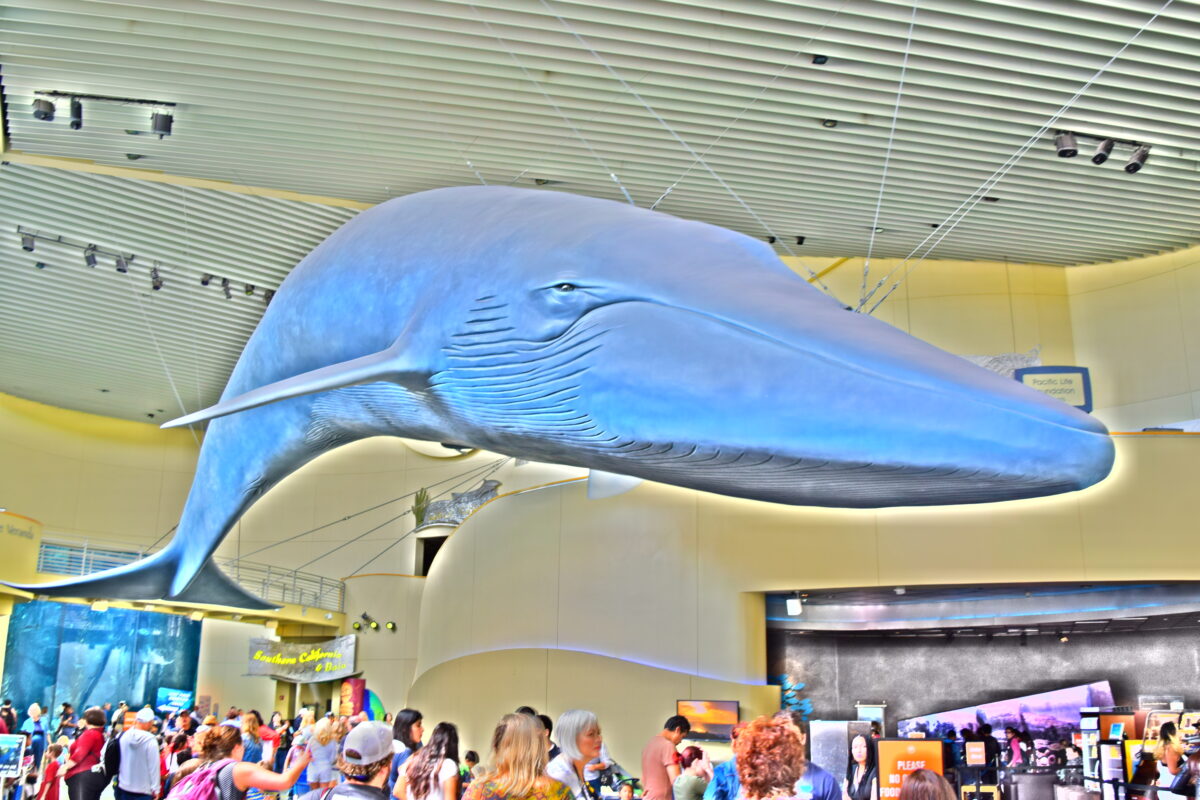 Full-size replica of a blue whale, made even bluer for your viewing pleasure. Photo 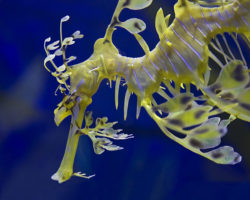 Leafy sea dragon. Photo courtesy of the Aquarium of the Pacific

In his novel, “Tereza Batista,” Jorge Amado muses on the other two-thirds of our planet: “There were all sort of things in the sea: fishes and castaways, black octopuses and silver rays, ships from the other side of the world, and sargasso plantations.”

There are all sorts of things in the Aquarium of the Pacific as well. When the Long Beach oceanarium opened in 1998, I had the honor of attending with the great journalist Will Shuck, who just happened to be an Easy Reader editor at the time. While Shuck has since moved on to the greener kelp beds of Sacramento, I have been drawn back to the aquarium, so often in fact that you’d think I was some lab animal knowing which lever to push for its reward.

And what’s been that reward?

Well, let’s begin with the jellyfish. 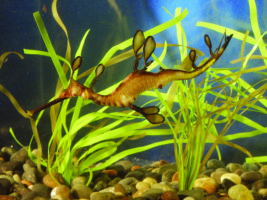 Weedy sea dragon. Photo courtesy of the Aquarium of the Pacific

How shall we describe these exquisite creatures? As living poetry or biomorphic porcelain? Perhaps as tiny, pulsating chandeliers?

What about the Shark Lagoon with its touch pools? One evening four years ago Long Beach Opera staged “The Paper Nautilus,” a chamber opera by Gavin Bryars, in front of the glass-paneled, three-story Blue Cavern exhibit at the end of the Great Hall of the Pacific. The one you encounter after walking underneath the full-scale replica of a giant blue whale. Afterwards, in our operatic finest, we mingled and conversed outdoors while the sharks stealthily cruised by in the cool water of their enclosure.

Opera and shark ponds; now think about that for awhile. 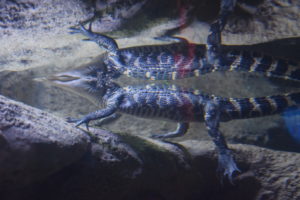 Another favorite is the Lorikeet Forest, a walk-through aviary with dozens of noisy Australian lorikeets (colorful, arboreal parrots). Visitors can purchase a little cup of nectar with which to entice the birds. I once suggested to an aquarium employee that one member of the lorikeet fleet be named “Bondo,” so that all of my pals–you know who you are–could stop by and say, “Hey, which one’s Bondo?” But the folks at the aquarium didn’t bite.

Or rather, to be optimistic, they just haven’t gotten around to it.

Which brings us to the newest exhibit, actually a pair of them, including one that introduces us to a number of sea creature as visually fascinating as those beloved jellyfish described above. 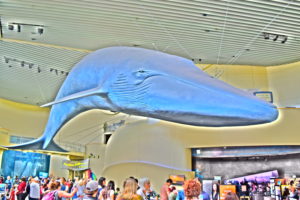 Full-size replica of a blue whale, made even bluer for your viewing pleasure. Photo

“Horses and Dragons” is a title more likely to conjure up visions of Tolkien-like romances, but it refers to the dozen or so species of seahorses and seadragons and their cousins the trumpetfish, the pipefish, and the razorfish (you can shave with the latter, I’ve been told). All of these guys belong to an elite crew called Syngnathid, which has been around for 50 million years but, guess what, a number of them are environmentally threatened.

Just as there are many types of land-based horses, from the Arabian to the Percheron, and the Mustang (one of which founded Mira Costa High School) to the Clydesdale, so it is with their miniature aquatic brethren: On view we can marvel at the pot-bellied seahorse, the tiger tail seahorse, the Pacific seahorse, the longsnout seahorse, and the dwarf seahorse. The last-named (perhaps we should call them sea-ponies?) was listed in the 2009 Guinness Book of World Records as the slowest swimming fish. Which also means you won’t be seeing one at the Rio Olympics.

If seahorses look “cute,” seadragons simply look bizarre. Both the leafy seadragon and the weedy seadragon resemble small branches or twigs that have floated away from the tree or shrub to which they were formerly attached. They’re truly unique.

Live coral. If it sings, live choral. Photo courtesy of the Aquarium of the Pacific

Therein lies the problem. Nature takes its time, slowly crafting animals to their environment. But if the environment changes too quickly? Well, there are two straight paths to extinction. One, a species is unable to adapt, and two, a species is too successful at adapting. In the former, an entire species tires from being unable to keep up, and wanders off the map of existence. In the latter, overpopulation and a depletion of the food source spells big trouble.

Can we rise to the challenge?

Pacific seahorse. Photo courtesy of the Aquarium of the Pacific

That’s our segue to the second new exhibition, “Vanishing Animals,” which is “focused on the issue of ocean extinctions and how to prevent them.”

When we think of animals going kaput, we tend to think mainly of the big ones, the tiger, the rhinoceros, the orangutan, the polar bear, but who gives a hoot for the newt–the California coast newt, for example, or the California tiger salamander?

Well, “Vanishing Animals” brings these two amphibians to our attention, along with several other creatures that extend from the speckled dace to the white abalone and even the American alligator. Furthermore, an entire ecosystem is centered in and around the world’s coral reefs, and these are declining at an alarming rate.

The principle culprit, upsetting the applecart of sustainability, if of course our own species, handed the stewardship of planet Earth but largely shirking our duties. 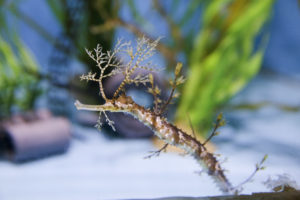 Ribboned sea dragon. Photo courtesy of the Aquarium of the Pacific

Mario Vargas Llosa, in his novel “The Storyteller,” has one of his characters uttering these words: “If an evil occurs on the earth, it’s because people have stopped paying attention to the earth, because they don’t look after it the way it ought to be looked after.”

Sentiments like this aren’t uncommon, but they can’t be repeated too often. When the sea, the land, or the air is knowingly desecrated, often for short-term gain, it’s an evil, and mostly with unforeseeable ramifications.

Learning about these things, about what’s happening to other species and what can be done to reverse the damage, or to prevent further damage, is perhaps the best reward of all. That’s why the Aquarium of the Pacific is such a fine gift and resource for all of us in Southern California.

Aquarium of the Pacific