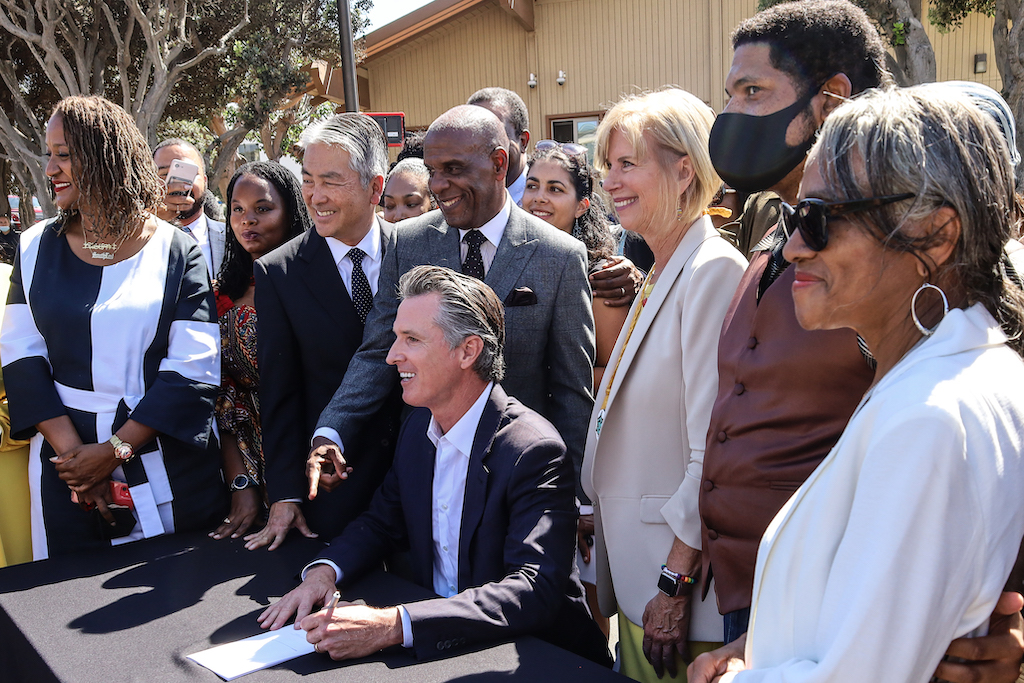 Governor Gavin Newsom came to Manhattan Beach Thursday morning and signed S.B. 796 into law, paving the way for Los Angeles County to return beachfront land which was historically Bruce’s Beach to the descendants of the family who lost the property through the city’s racially motivated use of eminent domain a century ago.

The signing took place in the County-owned parking lot that was once home to Bruce’s Resort, which came to be known as Bruce’s Beach when it became popular among Black beachgoers in the 1920s. About 100 people were in attendance, nearly all press, for an event that was only officially announced hours earlier. But Newsom made clear that what the law would accomplish was more than symbolic.

“It’s about economic empowerment,” Newsom said. “We’re moving from symbolism to substance….Let’s sign this bill and turn this property over.”

The Governor’s signature was the culmination of a yearlong campaign organized by Justice for Bruce’s Beach, a movement launched by activist and Manhattan Beach resident Kavon Ward that paralleled the national Black Lives Matter movement but with a locally specific goal —  to return the land taken by the City of Manhattan Beach in 1929 to the descendents of Charles and Willa Bruce. Ward began the campaign with a celebration at Bruce’s Beach on Juneteenth of last year. The movement caught the attention of Los Angeles County Supervisor Janice Hahn, who began investigating the history of the land and, eventually, how to return it to the Bruce family.

“Kavon Ward had been calling for justice for Bruce’s Beach,” Hahn said. “I finally heard her clarion call for justice, and realized that the County indeed owned the very parcels which were once Bruce’s Resort. I knew there was one thing to do, and that was to give the property back.”

State Senator Steven Bradford introduced Senate Bill S.B. 796 in April. It subsequently passed unanimously through the State Senate by early June and on September 8 received a unanimous vote from the State Assembly.

Ward marveled on Tuesday at how quickly the Justice for Bruce’s Beach movement had achieved its ends.

“Now we stand here a year later,” she said. “A year later alongside the Governor, witnessing it manifest for us.”

“Thank you, Governor,” said Hahn. “The law was used to steal this property 100 years ago, and the law today will give it back.”

“A historic day,” Bradford said. “A day of redemption. A day of atonement. A day of reckoning, recognizing the wrongs that happened to the Bruce family over 100 years ago.”

From 1912 to 1927, the Bruces operated a successful resort, one of the very few places on the Southern California coast where Black people could come to the beach. It attracted a burgeoning African American community after a half dozen other Black families purchased adjoining land. The City of Manhattan Beach, concerned that what was known as “the Negro Problem” would “slow our progress,” as one city leader later wrote, condemned the land through the use of eminent domain. The city in 1948 gave the land to the state, which in 1995 gave it to the county. Today, the land is home to Los Angeles County Lifeguard training headquarters.

SB 796, which was introduced by Bradford and co-authored by State Senator Ben Allen and Assemblymembers Al Muratsuchi and Autumn Burke, addresses deed restrictions attached to the former Bruce’s Beach land that require only public use of the land. The language of the bill amends the state’s Public Resource Code to “except the requirement that the County of Los Angeles comply with all restrictions specified in the deed…” The bill, which is an urgency statute, also adds a new section to the code:

The Board of Supervisors in April unanimously voted in favor of initiating the process of returning the land. Hahn said that Supervisors would seek to finish the process.

“The work is far from done,” Hahn said. “Now that LA County officially has the authority to transfer this property, my goal over the next several months will be to transfer this property in a way that not only works for the Bruce family, but is a model that other local governments can follow. Returning Bruce’s Beach can and should set a precedent for this nation and I know that all eyes will be on Los Angeles County as this work gets underway.”

The issue of precedent is something Hahn has embraced but one that has long caused political leaders to shy from acts of reparations.

Bradford is a member of the state’s Reparations Task Force, which was established last year and is the first such body of its kind in the U.S. He said Bruce’s Beach would be an example for others to follow.

Bradford noted that reparations are not without significant precedent already.

“Many said, ‘Well, I wasn’t there at the time. It wasn’t my responsibility,’” he said. “Well, last time I checked, Ronald Reagan was wasn’t president during the Japanese internment, but he apologized.”

Reagan issued more than an apology but also, with Congressional approval, $1 billion in payments to Japanese Americans. 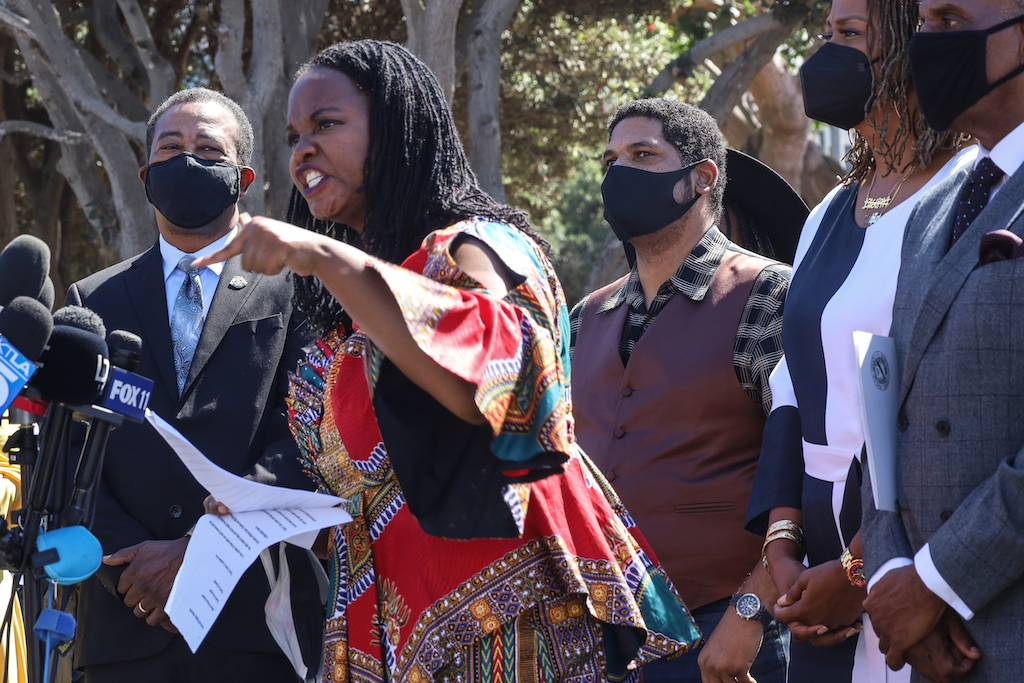 Kavon Ward, leader of the Justice for Bruce’s Beach movement, vowed that the movement towards restorative justice has just begun. Photo by Kevin Cody

Kavon Ward vowed that this was only a beginning. Ward, who is also a poet, gave an emotional speech in which she decried a descending list of numbers —  which included two, the number of death threats she received; zero, the number of times local police offered her protection; and eight, the number of mothers involved in the Justice for Bruce’s Beach movement —  and ended with a name check on future instances of reparations that her new national organization advocates.

“The journey here was far from easy, but I was born and raised in Harlem, so audacious courage resides within me and is extremely necessary as I move forward and aid other Black families across this country through Where Is My Land,” Ward said. “The fight for restorative and reparative justice continues nationally. Cleveland Clinic we know what you did to Winston Wilson, and we’re coming for you. No justice, no peace.”

Muratsuchi recognized that the issue remains under contention within Manhattan Beach, but praised former Mayor Mitch Ward, who helped revive the hidden history of Bruce’s Beach in 2006, and current Mayor Hildy Stern, who supported the movement to redress wrongs.

“This effort to right a wrong, it continues to be debated in this beautiful community,” he said. “But I have no doubt…that not only are we here on the right side of history, but that we are all here to celebrate this historic occasion, to right this wrong for the Bruce family.”

Anthony Bruce, a great great grandson of Willa and Charles, had at outset of this legislative effort stated simply what he hoped for his family.

“I just want justice for my family,” Bruce told the Los Angeles Times earlier this year. “I’m just looking for hope and mercy.”

On Thursday, Bruce, a religious man, stood at the podium and gave a prayer of thanks.

“Who am I, O Sovereign Lord, and what is my family that you have brought me this far?” Bruce said. “And now Sovereign Lord, in addition to everything else, you speak of giving me a lasting dynasty? Do you deal with everyone this way? Oh, Sovereign Lord. What more can I say?”

“I want to thank everyone who is here today,” Bruce said in closing.

“I am proud as a son of this state, as the governor of the most diverse state in the world’s most diverse democracy, to be here, Anthony, with you, to be here with your family, to be here not just for the descendants of the Bruce family but for all of those families torn asunder because of racism,” Newsom said. “God bless you all across this country and around the world, because I really believe this can be catalytic. What we’re doing here today can be replicated anywhere else. There’s an old adage, ‘Once a mind is stretched, it never goes back to its original form.’”

The Governor did engage in one bit of symbolism. He took a direct shot at the Manhattan Beach City Council, which earlier this year refused to issue an apology to the Bruces for the city’s taking of their land in the 1920s.

“As governor of California, let me do what apparently Manhattan Beach is unwilling to do,” Newsom said. “I want to apologize. I say that as a proud Californian, but also mindful that we have not always had a proud past.”

The Governor’s final act in Manhattan Beach prior to signing SB 796 into law was to put his arm around Kavon Ward.

“When I was listening to you, watching you, I was reminded of this —  leaders can be found anywhere,” Newsom said. “You don’t have to be something to do something. It’s not about title. Dr. King didn’t spend one day in the White House except advocating for change. He was never the president of the United States; he changed the world. Gandhi never spent a day as prime minister; he changed the world. Cesar Chavez. You go down the list. It’s people, not just in positions of formal authority —  that’s a privilege —  but people with moral authority that move the needle to justice. So thank you for the exercising of moral authority.”