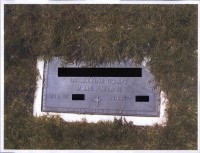 The military graves similar to this one were robbed of their bronze placards. Photo courtesy of RBPD

Police are searching for three bronze military markers that were stolen from the graves of military veterans sometime late Thursday night or early Friday morning.

The grave markers, taken from Pacific Crest Cemetery on 182nd Street, were pried off cement platforms, presumably for the value of the bronze.

“It’s pretty egregious,” said Sgt. Peter Grimm of the Redondo Beach Police Department. “These are the graves of people who have served our country, and somebody removing U.S. military placards off those graves…that’s pretty low.”

The grave placards are 12 by 18 inches and an inch thick. Police are searching for information on the thefts themselves, and also hoping that any business approached for the purchase of the bronze will contact investigators.

“We are hoping to reach out to the recycle centers,” Grimm said. “I believe if they are aware, they will do the right thing and come forward. Hopefully we can recover these things.”

Anyone with any information regarding these thefts is encouraged to contact the Redondo Beach Police Detective Bureau at (310) 379-2477 ext. 2714. ER