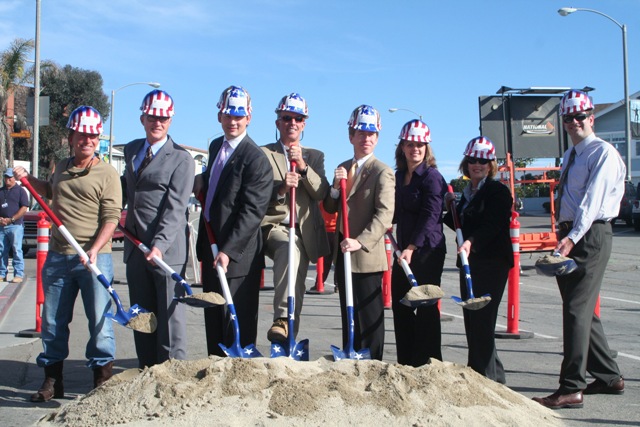 Federal and regional officials flocked to Hermosa to praise the pollution-fighting aspects of a $4.2 million project to overhaul upper Pier Avenue, the town’s iconic roadway. Serendipitously, it was those green measures that drew enough funding to the ambitious project to keep it alive.

Ken Robertson, the city’s director of community development, squinted into the sunshine at Monday’s formal groundbreaking ceremony for the project, and mused upon the importance of $1.3 million in federal stimulus money that officials secured four months ago to complete the project’s funding picture.

In August city officials had gotten word that a grant they had sought from Caltrans would be denied. Then in September relieved officials learned that they would get the stimulus money instead.
“The project was dead until we got that,” Robertson said.

The stimulus money was awarded for what federal environmental officials call “green street” elements of the project, which will remake upper Pier with wider sidewalks, broad pedestrian “bulb-outs” at intersections, a traffic median, basic repairs to the roadway, new street lighting, benches and bike racks.

The green street aspects – which attracted the stimulus money from the U.S. Environmental Protection Agency via the state Water Resources Control Board – include an innovative system designed to catch storm water at various points along the avenue as it makes its way toward the Pacific Ocean.

The system is designed to filter the water into planted areas with permeable surfaces. The water will irrigate the plants, and leftover water will evaporate from the permeable materials.

Officials said the new system will reduce the amount of storm water, with its bacteria and other contaminants, from reaching the ocean.
“It’s cutting edge really,” said John Kemmerer, associate director of the EPA’s water division, who was on hand for the groundbreaking.

“It’s the model of how to do this kind of retrofit,” he said.

Kemmerer referred to the conventional approach, which filters storm water only at the end of the line, as “the 20th Century method.”
“This deals with pollution at the source,” he said.

“It’s filtered through the system,” she said. “Along the way it’s being filtered before it gets to the end of the line.”

The project also will run pipes from the greenbelt parkway down to upper Pier to use reclaimed water for additional irrigation along the avenue.

Madelyn Glickfeld, vice chair of the Los Angeles Regional Water Quality Control Board, donned a red, white and blue hardhat to praise the green elements of the project as she addressed the groundbreaking assemblage.

“You’re taking responsibility as a community,” she said.
Glickfeld said her agency tries to enforce separate standards for the reduction of bacteria, metals and other contaminants, but systems like the one for upper Pier will simplify things.

“You’ve come up with a way to deal with all those contaminants at once,” she said.

“We will not really solve” urban runoff problems “until local communities find ways to green their streets,” she added.

“This is just a fascinating project,” Mayor Michael DiVirgilio told the assemblage, which included city council members and commissioners, design engineers, Councilman Mitch Ward from neighboring Manhattan Beach, and Steve Napolitano, an aide for Los Angeles County Supervisor Don Knabe. Also present were members of the ad-hoc Upper Pier Avenue Committee, which met for a year before presenting recommendations for the project to the City Council.

DiVirgilio recalled an experiment in which the city temporarily restriped upper Pier to gauge residents’ reaction to the possibility of narrowing four lanes down to two lanes. Angry residents barraged the city with emails and speeches at public meetings, and any thoughts of a lane reduction were dashed.

The mayor said the rocky start propelled the city to undertake the yearlong process, which was dotted with public hearings to collect community input on the project.

“We came up with a project that worked really well for everybody, but did not work perfectly for any one point of view,” DiVirgilio said.
Some businesspeople along the avenue quarreled with the project, however, telling the ad-hoc committee and the council that the project will interrupt traffic flow and access to parking and sidewalks, and could prompt their landlords to raise their rents once upper Pier is gussied up.

City Public Works Director Rick Morgan has said the project is estimated to take six months, and workers will replace the sidewalks in sections and maintain adequate walkways to each business. Some of the work will be done at night.

Critics also have complained that some parking spaces will be lost on a southern stretch of the avenue, where diagonal spaces will be replaced with parallel spaces. City officials have said the overhaul will reduce the number of standard parking spaces on upper Pier from 142 to 131, but will add narrow spaces for motorcycles and “micro” cars, and add spaces just off the avenue for a net break-even.

At the groundbreaking, DiVirgilio said zoning changes that accompany the project “will help us maintain our small-town atmosphere” by limiting new buildings to two stories and requiring deeper setbacks for future construction.

The project is funded in part by $2.1 million in money from the county that can only be used on roadways that are part of bus routes.
City officials said they will post weekly updates on the project at hermosabch.org. ER