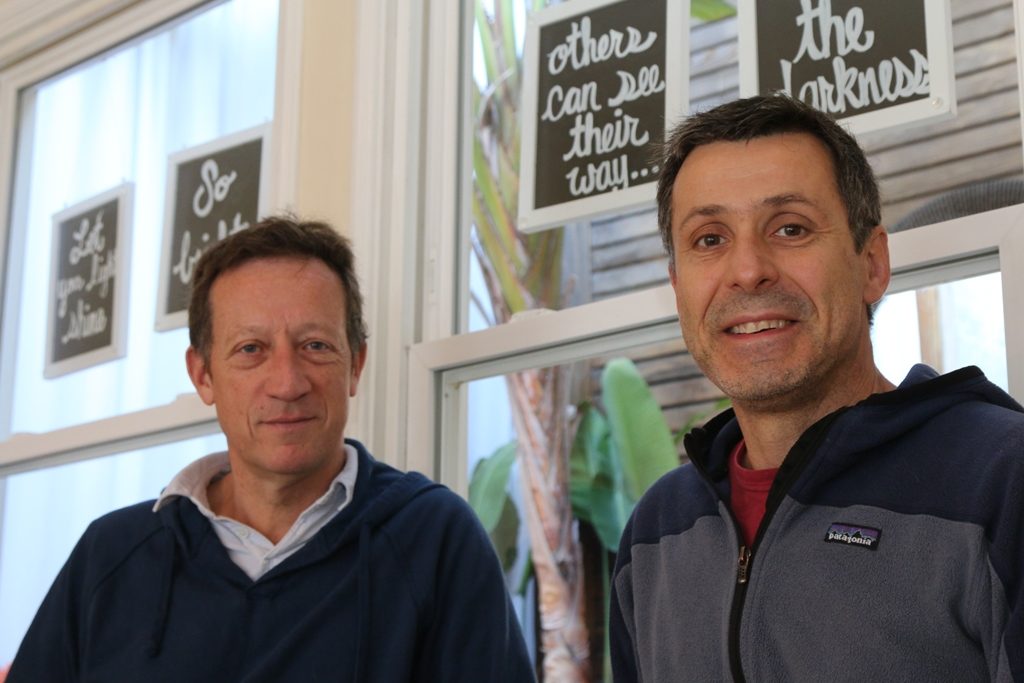 People come to yoga for different things. Some really just want a workout, a good sweat, maybe to lose some weight. Others seek spirituality, connecting to a 4,000 year tradition through which they hope to cultivate mindfulness through breath. Some want it all, and that is where The Green Yogi, the elegant little studio tucked away on Highland in North Manhattan Beach, has made it’s name. A walk up its long, grass-lined, path-like entrance leads into a secret garden, apart from the worldly bustle outside; The Green Yogi offers refuge, as well as a rigorous workout through its strong emphasis on Vinyassa Flow classes. Founded by broadcast sports journalist Mary Strong-Sullivan in 2009, The Green Yogi has repeatedly been voted Best Yoga Studio, its popularity holding steady even as dozens of new studios have opened up throughout the South Bay. Last October, the studio was purchased by a pair of Frenchmen, Jean-Yves Salaun and Oliver Milhomme, who intend to build on The Green Yogi’s success by continuing to strike a balance.

“You can find your own spiritual or emotional aspect. It’s there; if you are looking for it, you can find it,” said Milhomme. “If it’s not your cup of tea, you can be in any class and not be bothered by an overtly spiritual aspect. It’s a nice balance here, which is maybe why we have so many different yogis —  some on a spiritual quest, well-being, others just for physical exercise.”

Upon arrival last fall, Milhomme, who is also a journalist for the French newspaper, La Monde,  went right to the heart of The Green Yogi: he took yoga teacher training from Julie Rader at her Mukti Yoga School, which is based at the studio. Rader is one of the foremost yoga teachers in the South Bay; most of the teachers at The Green Yogi have studied under her. Milhomme credits Rader for building a culture of consistently great teaching that is the hallmark of The Green Yogi. “So people know what they are getting when they come,” he said.

The only changes the new ownership plan are offering a slightly more diverse array of classes, with a particular focus on classes for kids and “yoga basics” classes for beginners. On May 20 from 2 to 4 p.m., the studio will offer the first in a series of free “Yoga 101” introductory workshops.  “It’s one way to get into yoga,” Milhomme said.