below is the Easy Reader article that originally appeared Feb. 10: 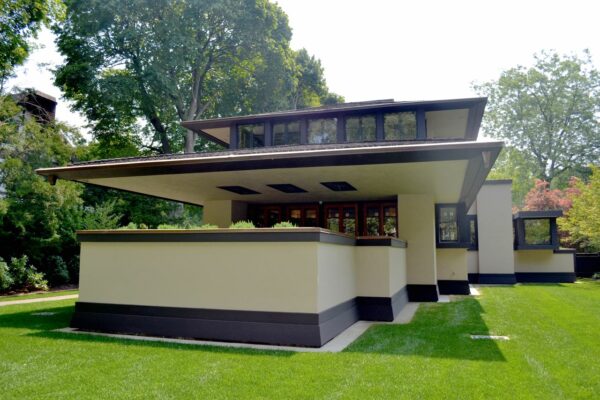 There was a house in Rochester, New York that seamed a long block with its beautiful flanks, aglow beneath the soft hum of American Elms, lined, the way a landscape is lined, by the degrees of light’s play. Inside this magnificent house lived a family, and a little girl with pigtails whose life would be forever changed by her experience there. The home was called Boynton House, and it was designed by architect Frank Lloyd Wright.

“Instead of standing in line with neighboring homes, the Boynton House appeared to hug the ground,” wrote Kim Bixler, the pigtailed little girl who is now grown and has recently published her latest book, Growing Up in a Frank Lloyd Wright House. 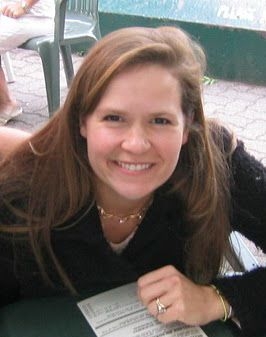 The author Kim Bixler, who will read from Growing Up in a Frank Lloyd Wright House on Feb. 10 at Pages in Manattan Beach.

The idea of grounding a building is mentioned often in her story, which she will present twice this week in her current hometown of Manhattan Beach before embarking on a countrywide tour. It is also a leading theme in Wright’s own work. The Boynton house is the easternmost of his Prairie School designs – an architecture marked by horizontal lines, hipped roofs with no gables and broad overhanging eaves, solidity and discipline in its construction. A distinctly North American architecture, Prairie was pioneered by Wright in the early twentieth century to slow and step away from the swell of streamed building, of assembly line manufacturing, to the sacred space of craftsmanship.

“Rochester sits on the southern shore of Lake Ontario and the Genesee River cuts through the city,” Bixler said. “There are several hilly areas, but much of the terrain is relatively level. Winters are harsh and snowy (the result of lake effect snowfall from Lake Ontario)- winters much like those in the midwestern states but with more snowfall.”

Wright, who would visit a worksite and not leave for three days, camped beneath a tarp amidst beams and nails and disgruntled rants of construction workers, labored in the language of the landscape.

“When Wright originally came to Rochester, the house was designed for a flat, sprawling lot. I think Wright designed the ideal home for the harsh climate of Rochester. The sheltering roofs extended far beyond the dimensions of the interior walls which protected the house from the elements, yet allowed sunlight to bathe the interior,” Bixler writes.

Bixler’s family lived in the home from 1977 to 1994, in constant rapture with the form of the structure and in constant flex with their checkbook for its care.

Looking through photographs of the Boynton home one cannot help but want to be inside. The architecture is its own, a distinctly American form, horizontal with well hemmed wood that glows from edge to edge. The home’s long dining room, complete with its original Wright table, is rimmed by horizontal bands of casement and clerestory windows. The kitchen is grand, magnificent, cherry clean, and somehow reminiscent of a small cozy kitchen on the planes of Nebraska where outside the afternoon storms are running thick and a soup is simmering on the stove. 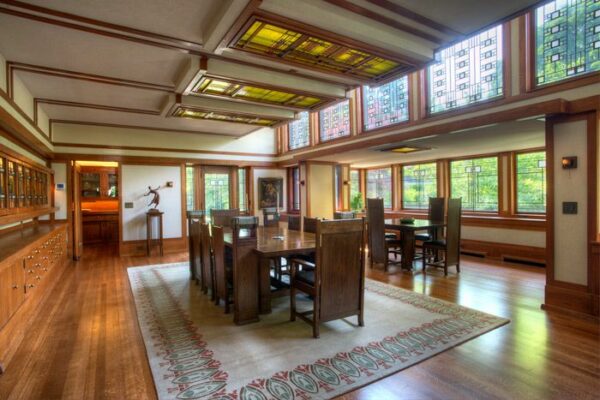 “I started giving tours when I was eight years old,” Bixler writes. “Imagine this little kid in pigtails discussing the lines of the house, the symmetry of the leaded glass windows in relation to the matching light fixtures and Wright’s use of space and lighting. Architecture students would listen with rapt attention as I read my mom’s carefully printed notecards. (Quite a thrill for a second grader.)”

Johann Wolfgang von Goethe, German poet and politician, wrote, “Architecture is ‘frozen music.’ Really there is something in this; the tone of mind produced by architecture approaches the effect of music.

And if poetry, like human life, is a house of many rooms, as John Keats wrote, then a well formed home, of beautiful rooms, can help hold the form of our lives, of our stories. 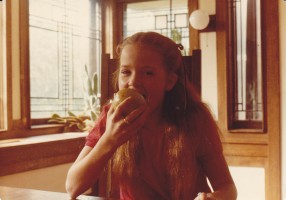 Kim Bixler as a child in the Boyton House

Bixler writes, “Our home was often the place where the teenagers gathered. My mother’s jewelry studio was in the house. The house was never stuffy or felt like a museum. After every child got over their initial shock of seeing the house, they continued to come back because it was so inviting.

“We lived a normal life, with a twist. Cars were always slowing down as they passed the house, people knocked on the door begging for a tour, students often sketched the house and some of my friends became architects and artists because of the experience.”

Philip Johnson, who founded the Department of Architecture and Design at the Museum of Modern Art in New York City, wrote that “All architecture is shelter, all great architecture is the design of space that contains, cuddles, exalts, or stimulates the persons in that space.”

More than 18 years have elapsed since Bixler resided in the Boynton House, yet the house still strongly resides in her.

“For most of my life I have been asked what it is like living in a Frank Lloyd Wright house,” Bixler said. “It’s nice to step outside of my role as mother, wife, chauffeur, bookkeeper, laundry maestro and master scheduler and share my stories. When I talk about the house, I feel like that kid in pigtails again.