Hadestown, one hell of a ride 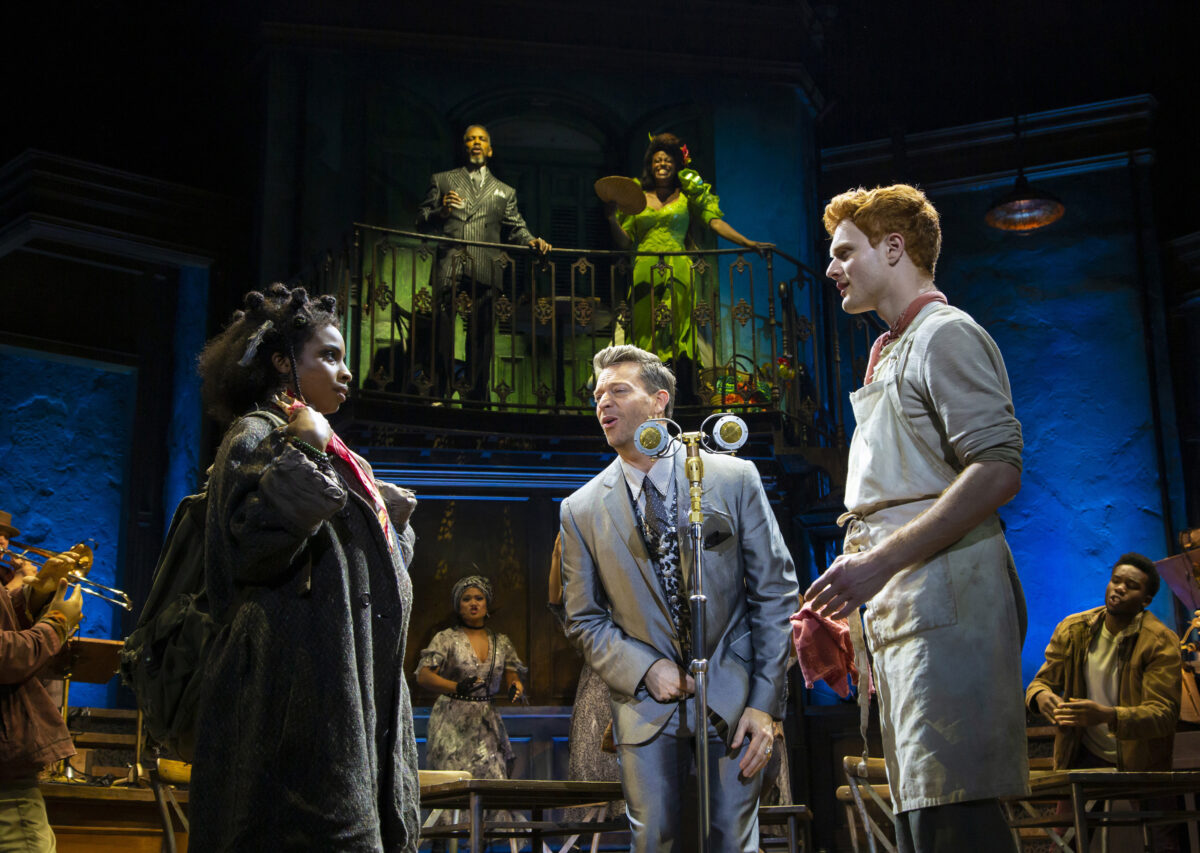 Tony Award-winner “Hadestown” at the Ahmanson

As the house lights dim and the stage lights emerge, we seem to be in a Depression-era New Orleans honkytonk saloon. Right away, ah, there’s a welcoming allure, but one years in the making. This unconventional re-spinning of the Orpheus and Eurydice myth by Anaïs Mitchell began brewing in 2006. She composed the lively music, wrote the lyrics, crafted the book, and in 2019 “Hadestown” garnered 14 Tony nominations, winning eight, including those for Best Musical and Best Original score. Now it’s on the move, at the Ahmanson through May and later this summer in Costa Mesa.

Liberties are taken, in this chronicle of a death foretold. Orpheus (Nicholas Barasch) will win and then lose his Eurydice (Morgan Siobhan Green), and after a heroic effort lose her yet again. Musicals, however, rarely if ever end on the downbeat, whereas with opera not only is a prolonged demise expected, but often the tenor or soprano will rise up from their deathbed to sing one last aria. Even this reviewer has openly wept and pulled out his hair at performances of “Madama Butterfly.” And so, just as the ship goes down in every version of “Titanic,” down goes Eurydice when Orpheus turns around ahead of schedule. “Hadestown,” of course, can’t end there, and so there’s a coda that raises a glass to his failed effort. It’s not whether you win or lose, it’s how you play the game (but try saying that to the bereaved). 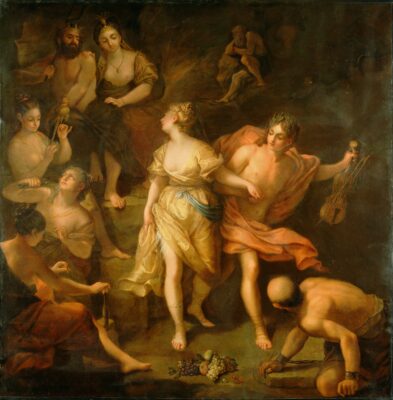 “Orpheus and Eurydice” (c.1718-20), by Jean Raoux. Upper left, side by side, Hades and Persephone; along the left margin are the three Fates; with a hopeful Orpheus leading away Eurydice. As Bob Dylan said, “Don’t look back.” Los Angeles, the J. Paul Getty Museum

Hermes (Levi Kreis) is our narrator and emcee; his winces and gesticulations may have you thinking he’s been watching old clips of Joe Cocker and Tom Waits. He fills in the blanks, tells us who’s who and what’s what when the story itself, which gives equal billing to Hades and Persephone, gets a bit loose at the seams. Hades (Kevyn Morrow) presides over the action from his Bourbon Street balcony, with wife Persephone (Kimberly Marable) at his side. In Greek mythology, brothers Zeus, Poseidon, and Hades divided up the planet, and Hades became Lord of the Underworld, not to be confused with Satan or Lucifer.

“Hadestown” toggles between these two couples and convincingly interweaves their stories. Persephone, abducted by Hades from the Earth’s surface, was consigned to spend half the year there. That’s why, when she’s below ground, we have autumn and winter, and when she’s back in the sunshine we have spring and winter. The play’s Persephone is a little more restless and rebellious than the myth implies, but I don’t know if anyone points out that if she didn’t spend half of the year in Hades, with Hades, the planet would dry up. Summer’s nice, but an endless summer would be the death of us.

Orpheus, the singer-songwriter who could charm animals with his lyre, is something of a big, naive puppy, a bit like Jethro Bodine of “The Beverly Hillbillies,” in that he’s idealistic, a bit slow on the uptake, and somewhat oblivious to reality. He encounters Eurydice and within half-a-minute is asking to take her home and one minute later is talking marriage. Eurydice, for her part, is more waif than nymph, a streetwise kid, possibly homeless, certainly nomadic, who’s already been down the boulevards of disappointment. In short, How are you going to support me, Orpheus? All you have are unfinished songs. That won’t put bread on the table or a roof over our heads.

She’s right about that. Orpheus may be the Eddie Van Halen of Thracian musicians, but he can’t hold a candle to the suave, urbane, and ingratiating Hades when the latter offers Eurydice a little more security if she accepts his job offer and resides in his domain. That’s not so much the snake bite of yore as it is the snake charmer at work. 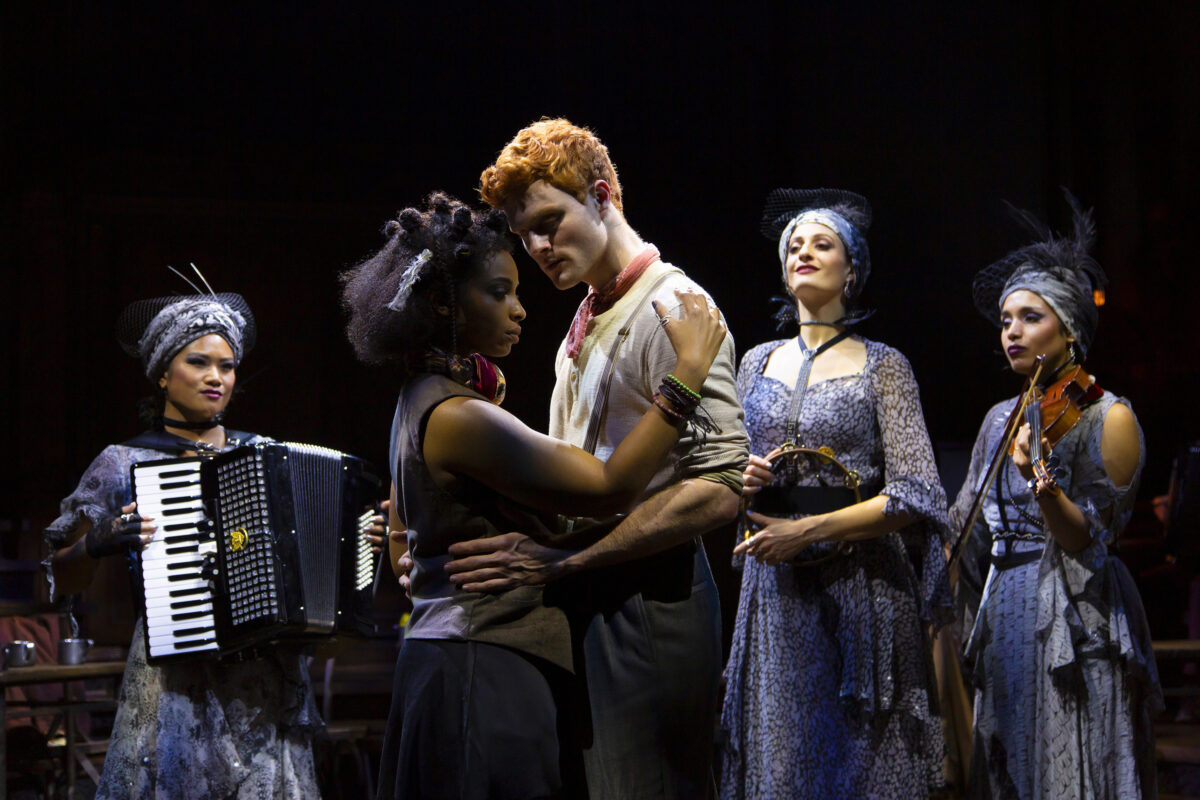 Cue in the three Fates (Belén Moyano, Bex Odorisio, and Shea Renne), who seem to lead the trajectories of our lives by the hand. They slither and glide in and out of the action, adding their commentary with the grace of Motown backup singers. As Eurydice mulls over whether to sacrifice love for real substance, the Fates are there to pose the question, “What you gonna do when the chips are down?” Sink or swim, eat sardines or caviar.

It’s only after she’s signed the contract with Hades that Eurydice realizes her mistake, as the Underground is a gritty dystopia, “Blade Runner” meets “Urinetown” via “Rent,” and so on, with an orc-like Workers Chorus that wouldn’t be out of place in a George Bellows painting. Out of the frying pan and into the fire, Eurydice is now a cog in a human treadmill and at risk of losing her will to rebel and escape.

Hades isn’t necessarily evil; he’s more of a factory boss running a tight ship. On the other hand, you wouldn’t want to work for him, either: “Who do we call the enemy, my children? The enemy is poverty.” And, “We build the wall to keep us free.” These could be the proles of “1984.”

And all the while, the seven-piece onstage band, tucked to both sides on risers, performs brilliantly. The music, often bluesy and soulful, a bit of grunge, a bit of gospel, honkytonk with ragtime and then the airy falsetto ballads sung by Orpheus, is among the best I’ve ever heard in a musical. No subpar songs here, and a lot of gems. 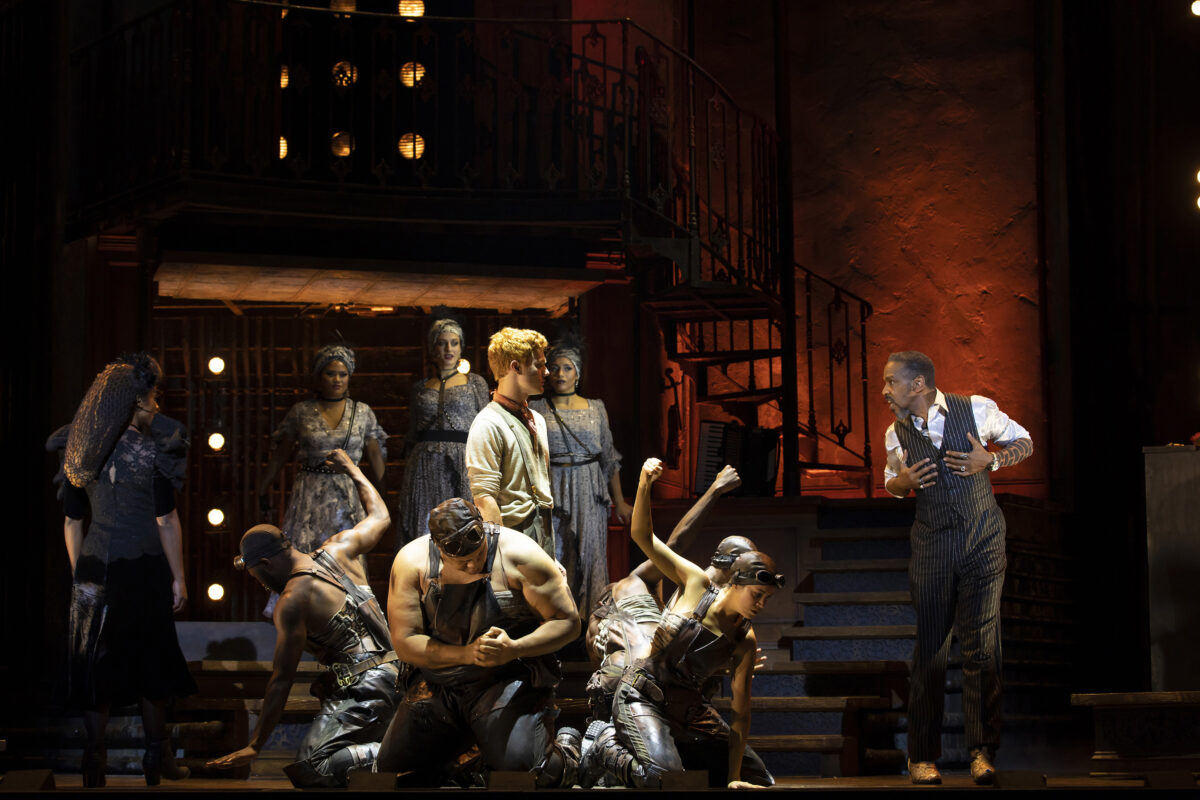 The Worker’s Chorus (that’s big Will Mann in front), the Fates, Orpheus in the center, and Hades to the right. Photo by T. Charles Erickson

The impression is that only a romantic soul wouldn’t think twice about braving the highway to hell in order to rescue a love interest. At first, Hades is merely annoyed: boy, you don’t belong here. But Persephone, who can relate, says, Hey, give the kid a chance; and Orpheus (remember, he can charm the pants off anything from pelicans to woodchucks) even touches the soot-covered heart of Hades, producing a “Beauty and the Beast” moment when Hades gives his wife a red flower. The one thing out of place is the eclectic guitar, which doesn’t mesh with the other, more traditional instruments. Scattered references, direct or otherwise, to the underground railroad emphasize the African-American tilt of this production.

There are various ways to portray the arduous trek back to the Earth’s surface (the recent Sarah Ruhl and Matthew Aucoin opera “Eurydice” employs an elevator), and here it’s largely through lighting and the liberal use of a fog machine, although the result is the same. Afraid that Eurydice is not following in his footsteps, Orpheus turns around. Eurydice fades, but spring, at least, always returns. Hermes comes forward, his words figuratively patting us on the back, and the cast raises a glass of wine and drinks a toast to the would-be superhero, “wherever he is now.” Could he try yet again? Third time’s a charm and all that? Sorry, no sequel; the Furies tore him apart, limb from limb.

What’s extraordinary is how well this show works, with most of the kudos, naturally, going to Anaïs Mitchell, but further enhanced and developed by director Rachel Chavkin, with the mighty fine help of choreographer David Neumann, scenic designer Rachel Hauck, costume designer Michael Krass, and lighting designer Bradley King. A big nod, of course, to the cast. It’s as near perfect a work as you’ll see on any stage.