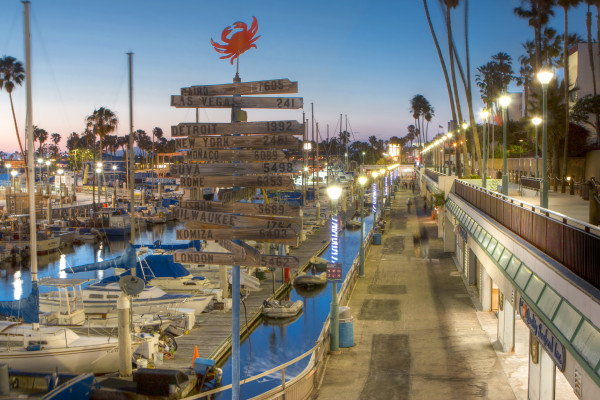 At far right, the strip above restaurants and bars above the International Boardwalk may soon be approved for summer dining each year.

With the King Harbor amenities study underway, the Harbor Commission has weighed in with their desire for an educational feature, as well as possible use of existing funds to improve Moonstone Park.

Harbor Commission President Roger Carlson noted that the board would like to see a new educational feature, similar to the now closed Sea Lab (across from the AES plant).

“It would be nice to have something like that more in the center of the harbor,” said Carlson.

For Moonstone Park, he remarked that the city has the money now to put in restrooms and add landscaping. The funding comes from a $2.4 million gift from Chevron after it unloaded large coker drums at the park more than 10 years ago for an El Segundo refinery project.

Overall, the Harbor Commission has given high marks to the latest city effort to revamp amenities. Consultants SWA Group held their first public meeting on the subject Dec. 15. Carlson praised what he heard, especially from SWA Group CEO Gerdo Aquino.

“It really seemed like he got it,” Carlson said. ER