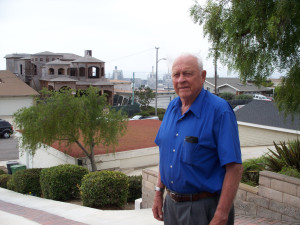 Engineer John Held was sent to Redondo in 1970 to oversee construction of the Pier Parking lot. With the pier approaching 50 years old, it has surpassed its service expectancy. Photo by Harry Munns

Redondo’s city fathers traded style for utility when they replaced the Plunge with a parking garage for the Redondo Pier. The Plunge was built in 1909 by Henry Edward Huntington in a classic style with a grand portico and Roman arches. It was billed as the “largest indoor salt-water-heated pool in the world” and it attracted visitors from around the world.

After nearly 60 years, the Plunge had outlived its usefulness. The future of Redondo’s waterfront lay in getting lots of people to it. In Los Angeles, that means cars.

Building a four-level garage on a 4.5 acre site that elicited tremendous sentiment from generations of residents and visitors was a forward-thinking action the likes of which you probably won’t see again anytime soon in Redondo Beach.

In 1970 Koebig and Koebig (K&K), an engineering and construction firm from Los Angeles, sent a young engineer, John Held, to oversee construction of the garage. K&K had been instrumental in much of the construction in and around King Harbor from the late ‘50s to the ‘70s. Held’s project was the largest to date.
“I came down here in August of 1970. The parking structure had an 11 month contract date with an $1,100 per day penalty for each day we went over. We never paid a dime.” Held said.

As one might expect from an engineer, Held recalls construction specifications with great detail. “The tunnel is about three feet thick. It was poured all at one time. It had to be a continuous pour, no stopping,” he said.
Held became K&K’s Redondo Beach man overseeing a number of subsequent projects, including the large retaining wall that holds back the hill above the upper level of the boardwalk known as the “Avenue of the Arts.” “We also did the widening of Catalina when we tore down the old post office. I was on that,” he said.
Held liked Redondo Beach so much he moved here. The city liked him so much they hired him in 1975. “I was city engineer and the building officer. I had both departments. The buck stopped with me.” He said.

If you decide to take a tour the parking structure, you’ll notice some temporary vinyl gates on the sidewalk of the bottom level between the garage and the Horseshoe. They’ve been put there to prevent pedestrians from being hit with concrete falling from the portion of the parking structure that overhangs that area.

Failure of this kind of construction isn’t unusual and it has nothing to do with K&K or Held. According to K. Nam Shiu of Walker Parking Consultants, “They (owners) expect their structures to be durable and generally have a service life of 30 to 40 years. Parking structures represent a particular challenge to achieve the desired lifetime, as they are exposed to exceptionally harsh environments. Although most parking structures are constructed with reinforced concrete, premature corrosion-related deterioration is common.”

This raises some perplexing questions. 1970 + 40 = 2010. What does that mean for the future of the garage? What would it mean to the city if this structure was condemned or had to be replaced?

City officials readily admit that deterioration of steel reinforcement within the garage seems to have occurred more quickly due to its proximity to salt water. But according to City Engineer and Chief Building Official, Steve Huang, “Anytime you are involved with concrete it’s considered structural but this is more cosmetic.”
The 40 year maximum useful life of this kind of structure is widely held among experts other than Shiu. Huang seems confident the repair work that’s currently being planned will solve the problem of concrete projectiles falling on pedestrians.

But that doesn’t answer the questions of what exactly is the parking structure’s expiration date and what happens when we reach it? Let’s all hope there’s another John Held standing by to provide those answers.
Comment on this or any other King Harbor topic at www.kingharborboater.com click on the “blog” link.