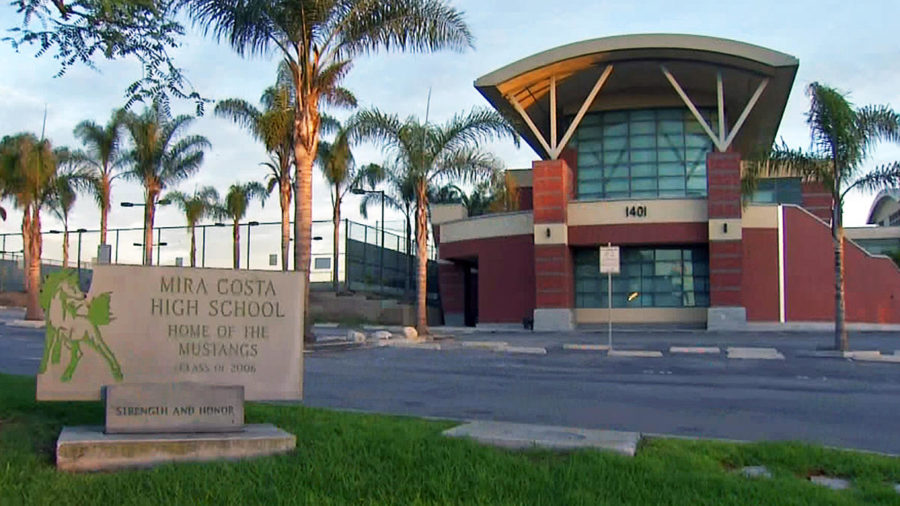 The swastikas and anti-Semitic words scrawled across the Mira Costa High School campus last week were the subject of more than two hours of impassioned public testimony at the September 14 meeting of the Manhattan Beach Unified School District Board of Education, including appearances by local rabbis and dozens of concerned parents.

Midway through the testimony, an elderly man in a dark suit slowly made his way to the podium, and his words brought the crowded room to a standstill.

Nat Rocker survived the Holocaust. Most of his family, he said, did not. Rocker described witnessing death on an unfathomable scale. After Rocker learned what had occurred at Mira Costa, including the writing of “Gas the Jews” on campus concrete, he came to the board meeting to deliver a warning wrought from his experience.

“I sort of take issue with the fact that this is being called graffiti,” Rocker said. “It’s not graffiti. It’s a message. It’s a message that I witnessed as a young boy.”

“In 1940, when I went to my teacher for a class, they used to call me, ‘Hey Jew,’” Rocker said. “It got worse. Me not doing anything, they started throwing rocks at me. Once they started throwing rocks at me, I told my mother I don’t want to go to that teacher anymore. She says, ‘No, just go the other way. It’s just some bad people.’ Well, these are bad people. They’re sending a message to us. They’re sending the message that we ignored in 1939. We lost 87 in my personal family. We lost 6 million Jews, and over a million gypsies. Everybody sat on their hands. This is not going to happen again. We can’t allow this to happen again.”

“Let me tell you when I was a young, young person I witnessed over 2,000 people being executed,” he said. “Women with two children in their arms. And I went back to the grave the next morning and what did I see? I see partial bodies and the grave still moving because some people were still alive and couldn’t get out. I saw my own grandmother being thrown on a truck because she was paraplegic, like a sack of potatoes. I’m not going to sit by quietly for the rest of my life.”

Rocker’s remarks brought tears to a room already fraught with emotion due to the messages left at the high school, which were only the most recent of several such incidents on MBUSD campuses.

“We are deeply troubled, once again, by this criminal act against our high school,” Superintendent John Bowes said at the board meeting. “Anti-Semitism and hate acts of any kind have no place in our community, or on our campuses, and we will continue to take steps to combat it.”

The school board took some specific actions intended to address the incident, including approving security cameras for MCHS, Manhattan Beach Middle School. Those security systems will cost $383,000. The City of Manhattan Beach contributed $250,000 towards that cost. Additionally, the Robinson Elementary PTA donated $61,000 to install cameras on that campus.

District leaders intend to do more than just install cameras. Bowes outlined several district programs intended to get at the underlying causes of the anti-Semitic messages. Staff, parents and students will visit the Museum of Tolerance,  a multimedia museum in Los Angeles that is designed to examine racism around the world with a strong focus on the history of the Holocaust. MBUSD is implementing its own Equity, Diversity, Social Justice, and Inclusion plan intended to combat hate by increasing empathy and making campuses more welcoming. Staff at Mira Costa have added 40 books whose subjects are anti-Semitism and the Holocaust. The graphic novel Maus, which is about the Holocaust, was this year added to core reading requirements at MBMS. Additionally, the district has launched Bark, a tool to monitor student internet activity, and Sprigeo, which will allow students and parents to report tips of hate-related behavior online.

Three rabbis from the community implored MBUSD leaders to not stop until they are able to get to the root of the hateful messaging.

Rabbi Yossi Mintz from the Jewish Community Center Chabad praised the district’s response, which included contacting the FBI and local law enforcement. But he cautioned that the occurrence must be confronted with the utmost seriousness.

“In my 27 years in this community, never have I witnessed this before,” he said. “The perpetrators have not been caught. This reminds me of what my grandmother told me many times. A Holocaust survivor who grew up in a culture where anti-Semitism, and statements were publicly displayed, and when no one was apprehended, she knew that the end was near.”

“I’m afraid that in our efforts to make everything pristine, shiny and new in Manhattan Beach, we miss out on reflecting on our places of brokenness,” he said. “I believe the same is true in our schools, especially with our high school students. Why are we not using the blatant anti-Semitism that is reoccurring and making it an opportunity for growth, learning and understanding? I know it’s the M.O. of law enforcement, but it’s a shame that the choice was made to erase Monday’s graffiti early in the morning before the students arrived. Let them see it. Most of our students today have no idea why ‘Gas the Jews’ is a historical statement of reality….

Two-thirds of millennials today don’t know what Auschwitz is. I bet if we walked through Mira Costa, you wouldn’t believe the ignorance. And it isn’t their fault. It’s our fault.” ER