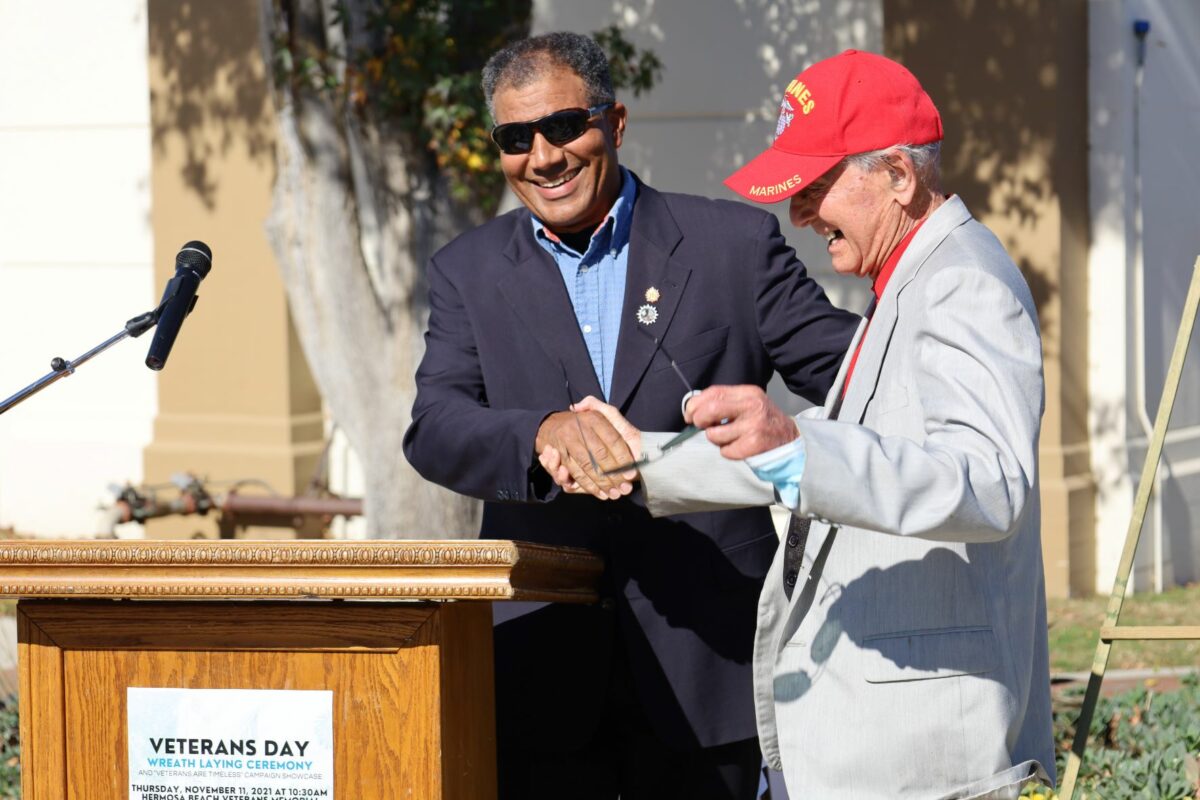 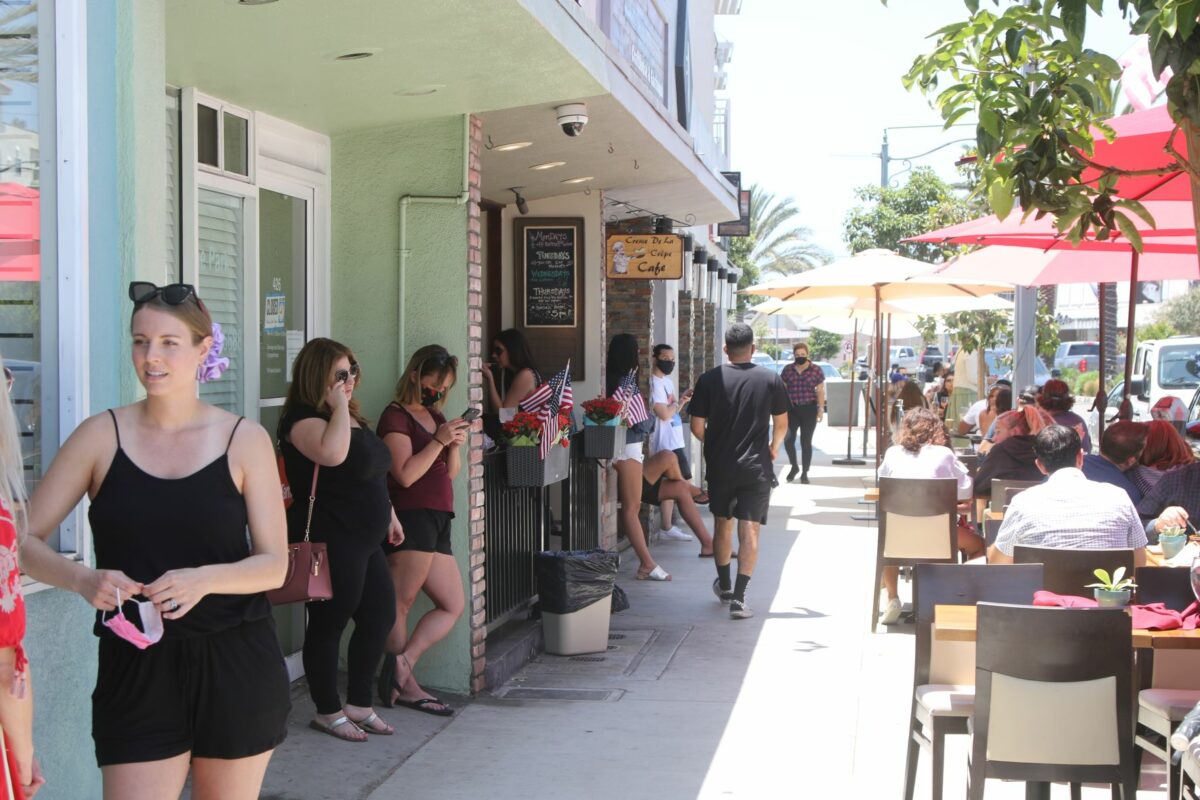 Outdoor dining proved popular enough for the Hermosa Beach City council to extend it at least through next May. Photos by Kevin Cody

Work on restriping traffic lanes on Hermosa and Pier avenues started almost immediately last year, part of a plan to accommodate restaurant and retail needs as the pandemic stretched into the new year. It was one of the first items on the City Council’s 2021 agenda, and it prompted a local debate that has endured throughout the year, as has the virus. To compensate for reduced vehicle accessibility, the streets would also be striped for bicycle lanes, a feature some say has proven popular.

Although outdoor dining at this time was prohibited by the Los Angeles County Public Health Department, there was anticipation of the pandemic’s waning impact on hospital loads. Hermosa Beach officials said they then could consider measures allowing restaurants to provide outdoor dining, and retail shops to extend onto the public space.

Officials predicted that the work would be minimally intrusive, and in fact the project was completed days earlier than scheduled. Council members agreed to reevaluate the project after six months to determine its success, and to decide if it should be continued. At year’s end, outdoor business was still being conducted. 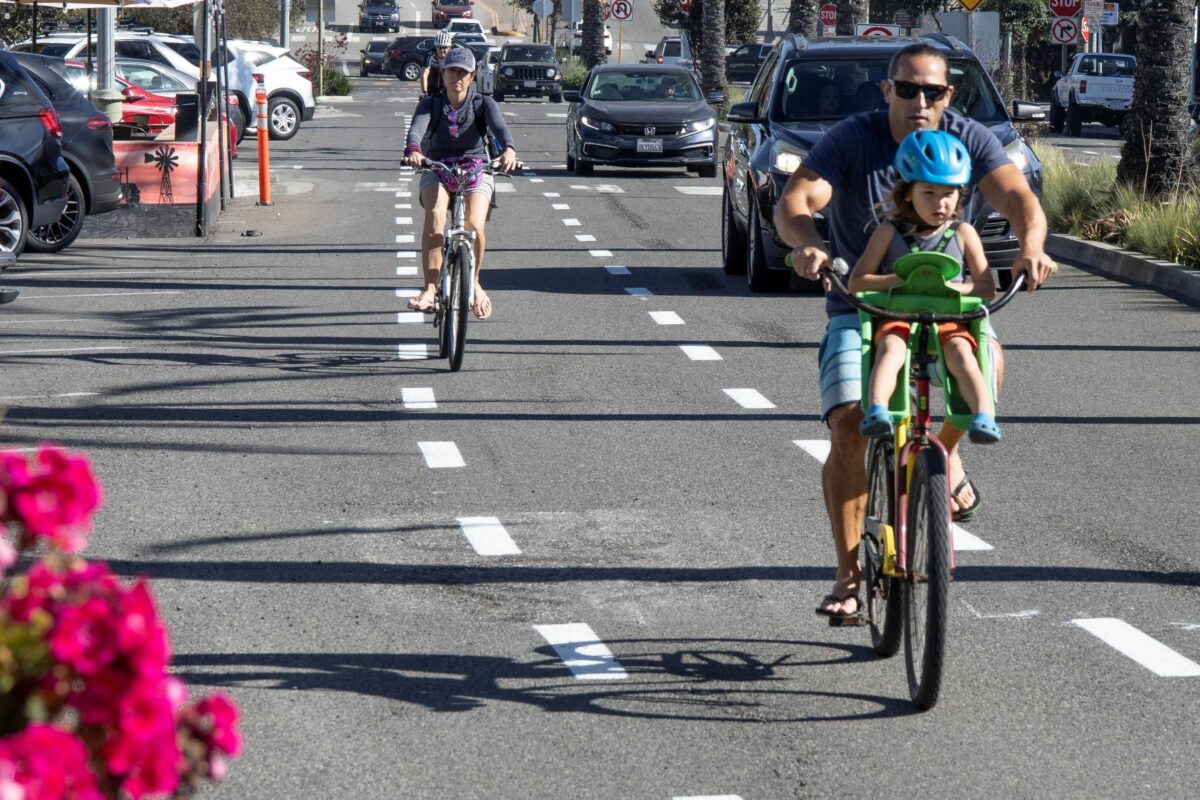 Bike lanes along Pier and Hermosa Avenues came at the expense of car lanes and proved controversial. But they will also remain at least until May, the City Council decided.

Also in January, an angry reaction by numerous residents to a plan limiting public participation in city council meetings caused council members to “table” the proposal – for the time being. As the new year starts, it remains as a “future agenda” item.

City Manager Suja Lowenthal wanted to curtail “general written communications” not addressing “specific” agenda items. Her plan got off to a rocky start when the issue was scheduled for council discussion, but had not been included on the public agenda. City Attorney Mike Jenkins told residents the idea was “staff driven” and intended to make council packages “a little more user friendly.”

“As we continue to refine the City Council agenda format, we have been reviewing agendas in other cities, and have determined that written communications of a general nature are not attached to agendas,” Lowenthal said at the time. “Therefore, beginning at the next city council agenda, we will no longer attach written communications of a general nature to the agenda.”

Jenkins said. The issue will come back on a future agenda for council consideration with “a revised ordinance and have a full discussion of the matter.”

One outspoken resident, Howard Longacre, had strong words for Lowenthal’s plan: “This is an absolutely filthy, rotten, disgusting, abusive technique used to modify the municipal code of this city,” he wrote in a letter to the council.

City taxpayers learned they will be hefting a much higher cost than previously expected for a May 11 special election to replace former council member Hany Fangary, who notified colleagues of his resignation on Christmas Eve.

That cost could exceed $100,000, the city council was told. Officials had expected the county to charge the city somewhere between $60,000 and $80,000. Several council members expressed “sticker shock,” but the council voted nevertheless to accept the cost of services of the Los Angeles County Registrar/Recorder/Clerk. Those services would include providing the city with a list of county precincts, voter records, voter signature verification services, election equipment, and assistance “as needed.”

Hermosa Beach election officials said they wanted to “expand election services provided by the county to include the procurement and furnishing of any and all official ballots, notices, printed matter, and all supplies, equipment, and paraphernalia that would be necessary in order to properly and lawfully conduct the election.” In the end, the election would cost less than feared, around $80,000.

Raymond Jackson, a retired army Colonel, turned a lifetime of unique professional responsibilities into an easy win for the open seat. He will take the place of Hany Fangary, who retired late in 2020, and serve until November 2022, when he faces reelection.

To some beachside residents, the sounds of tick, tick, tick associated with the increasingly popular sport of pickleball were irritating enough to prompt city officials to launch a months-long study, in March,  of what had become a local controversy.

Equipment selected for the study was the kind used primarily for beginning and entry level players. However, pickleball players participating in the study were overwhelmingly intermediate and advanced players, a circumstance that eventually skewed the end results. The study attempted to balance the “playability” of the gear as well as the perceived noise levels during play. Most of the players in the study said the equipment impaired their quality of play, and that the noise generated by the city’s equipment was no quieter than their own equipment.

Neighbors surveyed following the study’s active portion indicated that noise generated by the city’s equipment was “no different” from that of “usual play” times. More planning and neighbor-player collaboration was in store for the matter, officials said. 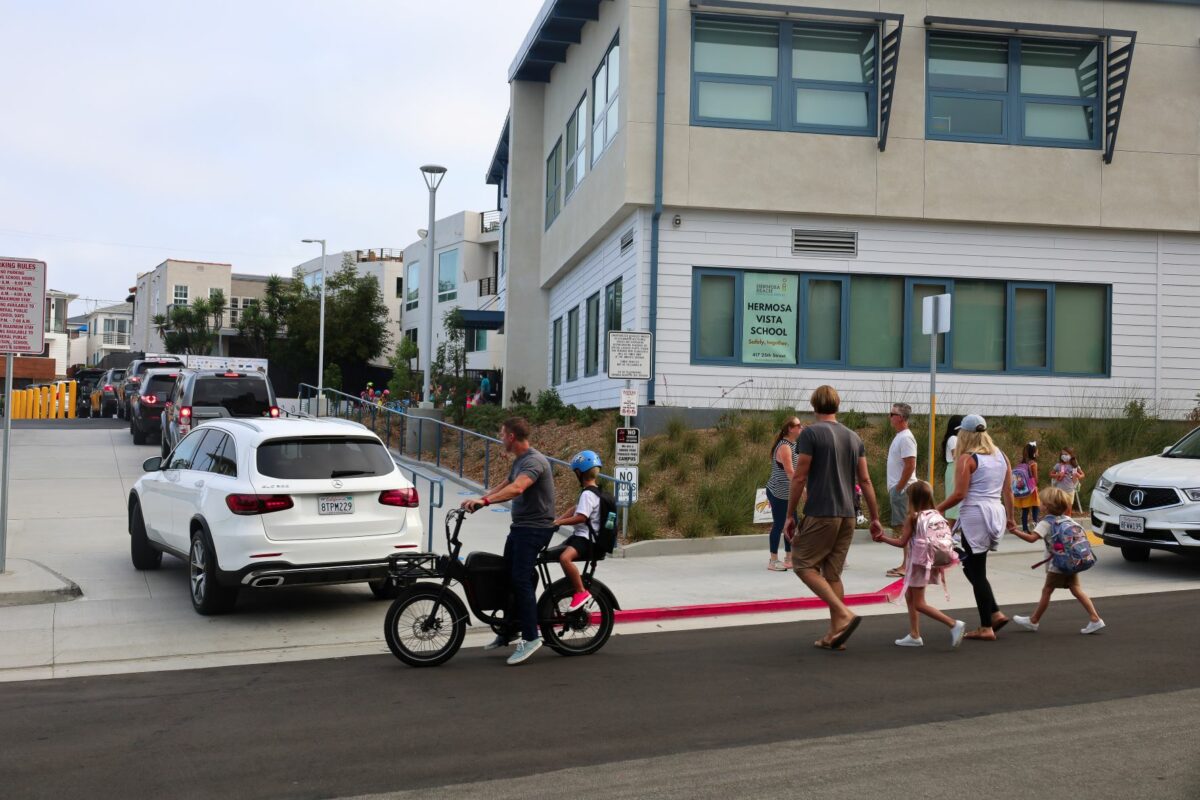 One of the bigger school stories of the year (and perhaps the decade) was the reincarnation of the old North School, built in 1924, into the transformed Hermosa Vista School. Funded by a voter-approved $59 million bond, the facility would completely replace the old structure despite hopes of some that a remodel would suffice.

Architects for the project said they hoped to preserve some of the historic nature of the North campus, but “given seismic and structural considerations, the more cost effective solution was new construction.”

The two story, compact design of the new school allows for large windows that look out on the ocean from atop the sand dune on which the school is built. It has 20 classrooms that are still the traditional 960 square feet, with a maximum capacity of 32 students, but the traditional lecture environment, with students facing a teacher at the front of the room in front of a chalkboard, has been abandoned in favor of flexibility meant to encourage student engagement.

After opening in April, an exhaustive traffic plan would be developed to deal with an irregular traffic  flow around the new structure.

Under tight pandemic restrictions, with fewer people out and about, city officials were pleased to note a reduction in crime. With the gradual lifting of those restrictions, some things became painfully obvious, according to Police Chief Paul LeBaron, and City Manager Suja Lowenthal. They thought some downtown businesses, particularly restaurants with nightlife and alcohol consumption, were contributing to an inordinate share of police responses. These were being viewed by the officials as “nuisances” and thus subject to alterations in use permits.

This perception led to a proposal for a city ordinance, one which was immediately castigated by several hundred people, with many calling it “unfair,” “oppressive” and “uncalled for.” The idea for the new law emerged during a May 18 meeting, which was labeled a “study session” by officials. Whatever the nomenclature, the issue was volatile, quickly.

According to LeBaron, alcohol-related “problems in downtown and the Strand area” were greatly diminished during the pandemic, and officials hoped to maintain that situation. After the bars and restaurants were allowed to reopen, LeBaron aIS, his department “experienced a significant increase in calls for service,” and the proposed ordinance noted that these were directly attributed to the operation of these establishments.

Among those responding to the proposal was restaurateur Greg Newman, of Sharkey’s and Palmilla, who said many of the businesses the ordinance seems to be targeting have been part of Hermosa Beach “since before most of you even have lived here.” He said the ordinance “is going to destroy our businesses and you don’t seem to care.” Newman said he was also speaking for other business owners when he suggested that relationships between local business and city officials might be going sour:: “This is a dagger in the heart of every business owner in Hermosa Beach,” he said.

The ordinance has yet to be revived.

City taxpayers learned in July that they would be picking up the tab for a $950,000 settlement paid to the owners of CrossFit Horsepower gym, which had been located on Cypress Avenue. The gym owners previously lost a battle with the city after officials declared their gym a nuisance based on neighborhood complaints.

Owners Jed Sanford and Dan Wells were forced to shutter the business, and subsequently filed lawsuits in both state and federal courts against the city, council member Stacey Armato, and the contracted Quality of Life prosecutor, Joy Abaquin. At one stage in the litigation, a state court judge, Mary Strobel, invalidated the council’s 2018 decision to declare CrossFit Horsepower a nuisance and criticized Armato, saying there was “considerable evidence” that Armato “was biased” in her vote to find the gym a nuisance.

Armato was the force behind that declaration, which earned her this rebuke from Sanford: “She has significant personal financial liability. There is no question she is using her official position to influence a governmental decision that will likely have a substantial effect on her personal finances.”

It did not. City’s taxpayer paid the bill; insurance did not help. The Riverside-based law firm of Best, Best and Krieger, with which Hermosa Beach City Attorney Michael Jenkins is associated, billed the city more than $33,000 for one month’s work on the matter. The entire legal bill would eventually top $302,000.

It was the Poop Deck for many years, then simply the Deck, but the legendary oceanside dive bar became simply a memory to many locals upon its widely-lamented closing on August 15. A retired lifeguard, Steve Voorhees , was one of a string of owners. He purchased the saloon in 1971 with Steve Wood, and recalled in a recent interview: “The saddest part during this was that so many of the young people who would come in off the beach in the afternoon were taking drugs. We had to run a lot of people out because they were high on something.” The pair sold after five years. The site is to become the Street Corner Urban Market.

The reconfigured Fiesta Hermosa Locale, with a considerably smaller footprint and customized to accommodate pandemic restrictions, proved popular with many downtown business owners and residents. But Chamber of Commerce officials said the four-day event over the Labor Day weekend likely will return to its traditional, more expansive format of past years.

The smaller version of the twice annual Fiesta was a response to the pandemic and to  “longstanding complaints from residents and businesses about street closures and a lack of local vendors.” For the first time, a charge of $25 was charged for admission to the garden for beer and food, as well as for kids’ rides.

The event usually produces income in the range of $300,000, but this year revenues were much lower.

When council member Stacey Armato suggested splitting the proposal into a pair of pieces, City Attorney Mike Jenkins said the proper action was to “vote it up or vote it down. It is not separable.” Mike Detoy and Raymond Jackson cast the dissenting votes. ER