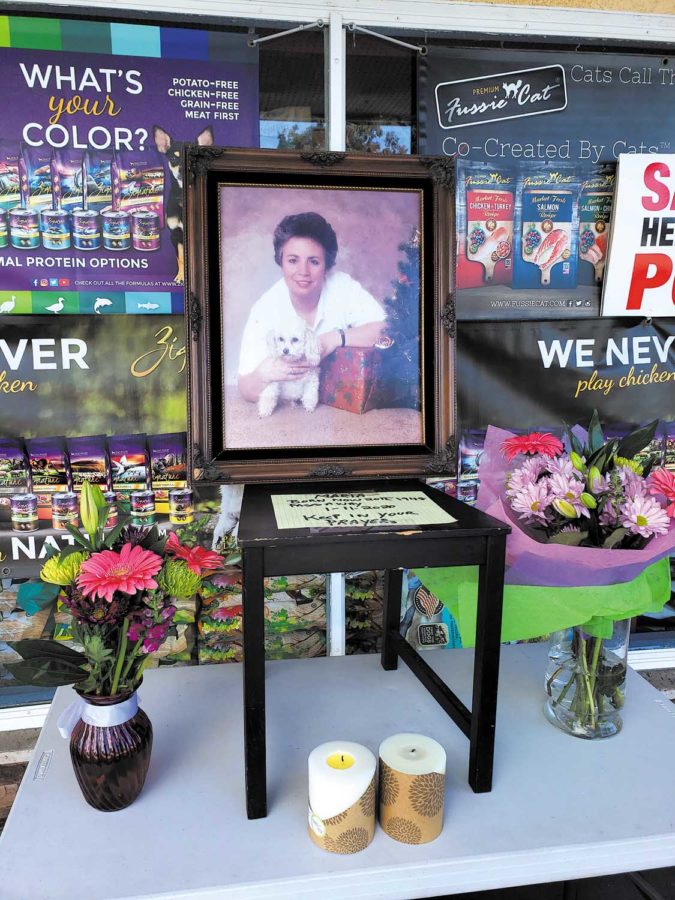 Customers created a memorial shrine to Maria Siddiq at her Hermosa Beach pet store following her passing on Sunday. Photo by Beverly Baird

Longtime Pet Mart owner Maria da Silva Lopes passed away Sunday after a long fight against cancer. She was 71. Maria had owned Pet Mart in Hermosa Beach since 1975. She and husband Abu have operated the store together since they married in 1984. The couple met when his sons became her customers. Abu owned a gas station across the street from Maria’s Aviation Boulevard store.

Maria was born in Portugal and lived in Mozambique before moving to Hermosa Beach in the early 1970s.

“I had to leave. They were killing all the native Portuguese,” Maria said in an interview last year, when her store was voted Best Pet Store by Easy Reader readers.

In 1984, Pet Mart caught fire and the property owner didn’t want to let her rebuild.

“A developer wanted to partner with me in buying the property. He told me I’d never get a bank loan on my own because I was a woman and a foreigner,” Maria recalled.

Maria obtained the loan and rebuilt the store.

In addition to her husband of 35 years, Maria is survived by sons Dan and Yousef Siddiq, and three grandchildren.

A memorial Mass will be held Monday, Jan. 20 at 10 a.m. at Our Lady of Guadalupe Church, 440 Massey Street (at Prospect Avenue), Hermosa Beach.