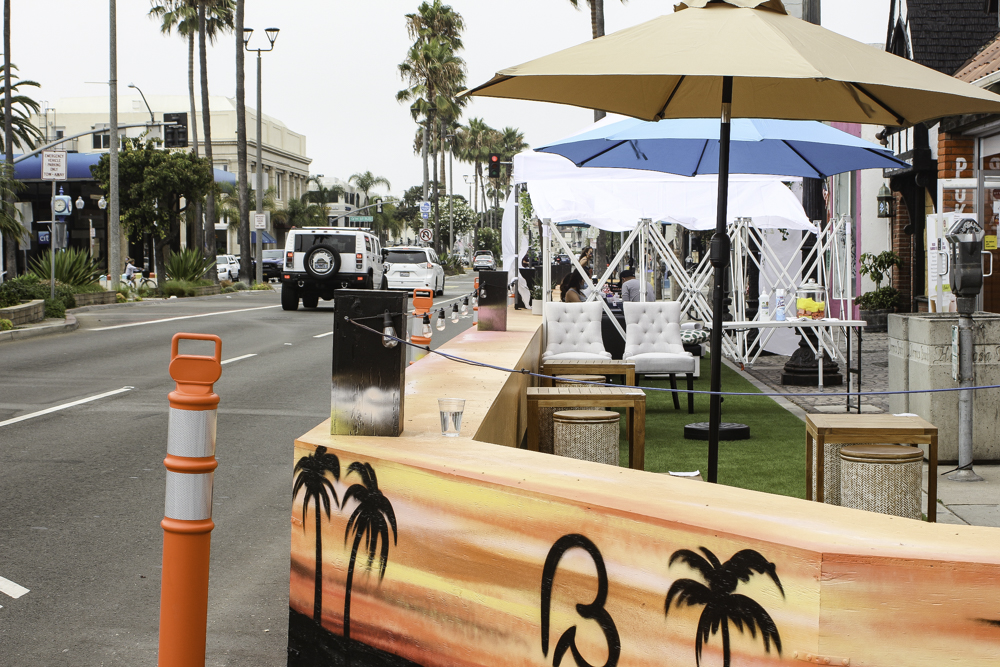 One lane in each direction of Hermosa Avenue will be closed for at least six months in downtown Hermosa Beach in order to provide more opportunities for pandemic-battered businesses to head outdoors and to create more space for cyclists and pedestrians, Hermosa’s council decided Tuesday.

The council unanimously settled on an option that will double the amount of space available for outdoor dining and retail options and create a dedicated north- and south-bound bike lane while reducing car lanes from two lanes in each direction to one. To accommodate those new features, all parking will be moved to the west side of the street, with capacity expanded by painting parking space lines at an angle, rather than parallel to the curb.

The decision resembles those made by other cities in the United States and throughout the world, who have sought to rethink public spaces as the coronavirus transforms long-established habits of dining, shopping and getting around. Staff had delivered plans to extend the closures, which begin at 14th Street, only as far south as 10th Street. But the council asked to cover two more blocks of the commercial corridor, to Eighth Street. They also voted to guarantee the closures would last at least six months instead of until mid-January, reflecting both a desire to provide some certainty to businesses investing in outdoor infrastructure, and also a sense that the desperation of the pandemic had created an opportunity to experiment.

“I’m very much in favor of wanting to make a bold move,” Mayor Mary Campbell said.

Not long ago a unanimous vote to close lanes on one of the city’s iconic streets would have been unthinkable. In May, staff presented the council with ideas for a “Summer Streets” program, which included lane closures on Hermosa Avenue as one possibility. At the time, county health orders had closed the beach and The Strand, and the city was seeking ways for people to walk and bike while maintaining social distance. Some in the community supported the idea, but a deluge of negative comments seemed to doom Summer Streets, with angry residents deeming it a pie-eyed assault on the automobile, certain to lead to gridlock. A cowed council pressed forward with a mild request to study only options that might aid businesses.

Though less than three months ago, the Summer Streets meeting took place in what now feels like a different era of the pandemic, one in which California was a leader in containing the coronavirus. COVID-19 has since spread with a vengeance. July was California’s worst month yet, with more new cases reported than in the previous three months combined. Cases throughout the South Bay increased rapidly, and Hermosa went from having the lowest case rate in the Beach Cities to the highest.

And while the beach and The Strand have reopened, Gov. Gavin Newsom has since closed bars and prohibited indoor dining. Scientists believe that outdoor encounters pose a far lower risk for transmitting COVID-19 than indoor ones, and it is unclear when the state might lift the rule. Outdoor “dining decks,” initially thought of as a way to help restaurants cope with limited capacity, are now eateries’ only source of revenue other than takeout, and seem likely to be an enduring feature of the streetscape.

The option selected by the council will double the space available for potential dining decks, going from seven feet from the curb to 14. A bike lane will border the decks, providing an additional barrier between patrons and motor vehicles. That option was also favored by the Beach Cities Health District, which in a letter predicted that it would “enhance people’s desire to walk and spend time and money,” while also encouraging cycling by giving bikes a dedicated lane and reducing the risk of riders getting “doored” by people suddenly exiting their cars.

But the desire to aid downtown businesses has not done away with skepticism over progressive transportation policies. The new parking spaces will be “reverse angle,” meaning drivers will have to back in, rather than enter nose first. Situating a bike near a traditional angled parking space would be “a big no-no,” said Environmental Programs Manager Doug Krauss, because of the heightened risk that riders could be hit while backing out. Some downtown businesses saw that as a reason to implement lane closures without bike lanes. And some residents continue to insist the closures will snarl traffic when traditional commuting patterns resume.

Councilmember Hany Fangary joined the council in the lane closures vote, but voiced uncertainty over extending them for six months.

“The concern that I have is that we all know is that issues regarding COVID-19 change every day, every week, every month,” Fangary said.

Environmental Analyst Leeanne Singleton said that the city could eliminate the bike lanes, resulting in the remaining lane becoming a “sharrow” lane used by both cars and cyclists. Such an arrangement is not unsafe, Singleton said, but without another lane would slow traffic more than a version with a bike lane.

During the duration of the lane closures, the city plans to study traffic volume on Hermosa Avenue and surrounding streets. Jonathan Wicks, a resident who works for a company that performs parking assessments for corporations and developments, suggested the city also devise a “value-per-acre” measure by examining changes in revenue for businesses in the area. Most urban design experts agree that making a neighborhood more “walkable” tends to increase average revenue for businesses there.

Along with studying traffic, Wicks argued, the city should ask, “Are people spending more money in this city? Are businesses thriving?” ER