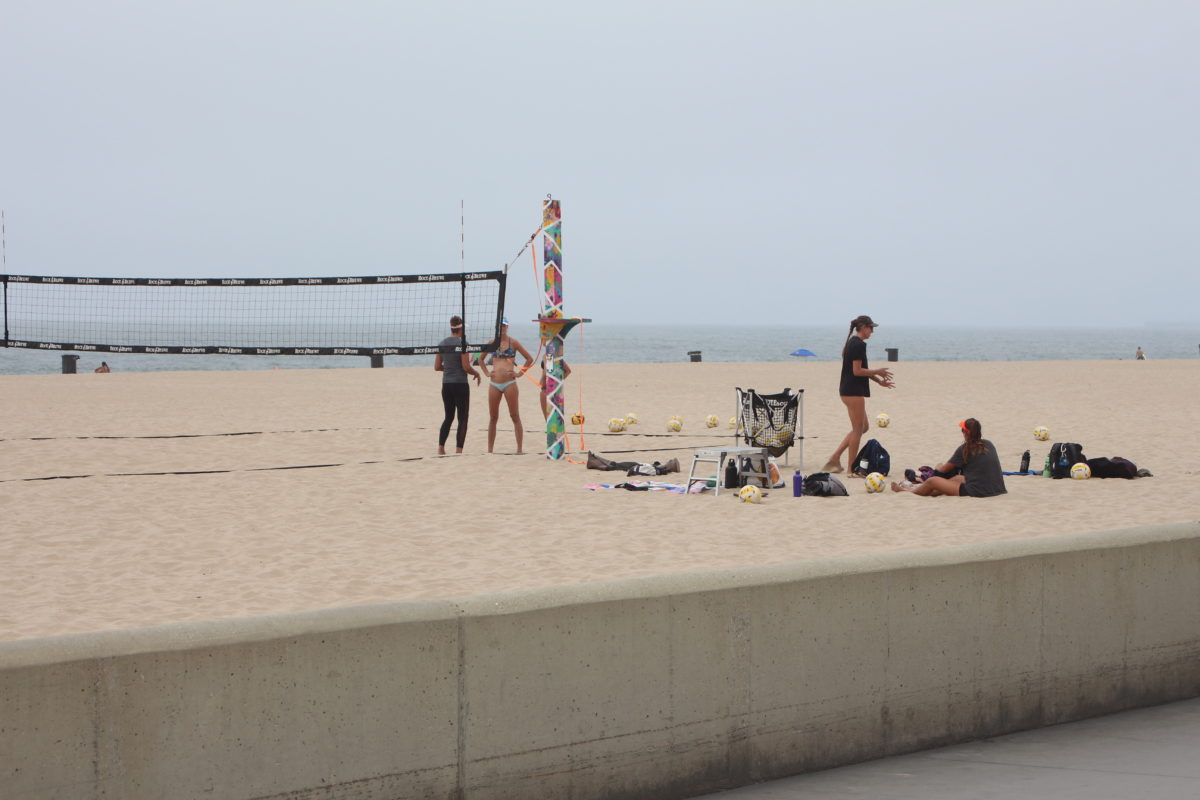 Players rest between sets on a volleyball court in North Hermosa this week. City staff say rules limiting group sports have been challenging to enforce. Photo

Rules on mask wearing and other public health precautions enacted by the Hermosa Beach City Council last month are encountering resistance, officials said Tuesday, with the workers brought on to enforce the rules occasionally facing harassment and threats.

Chief Paul LeBaron of the Hermosa Beach Police Department told the council the contracted staff who are being deployed throughout the city are facing “significant resistance and downright abuse.” He said particular problems have emerged with attempts to curtail team sports, which are prohibited by state and county health orders, at city parks and beaches. At times, reaction has been sufficiently intense that the workers have felt threatened and left the area.

The state of California and Los Angeles County require people to wear face coverings whenever it is impossible to maintain six feet of distance from people not of the same household. The ambiguities in that requirement have made it difficult to enforce, so last month Hermosa joined several other cities in Southern California in imposing a blanket rule that masks are required at all times in the city’s downtown, beaches, The Strand and the Greenbelt.

The council took no action at Tuesday night’s meeting, but City Manager Suja Lowenthal was wary that defiance of public health recommendations over the upcoming Labor Day weekend could lead to a resurgence in cases.

“As you may recall, after Memorial Day, we had quite a few cases, and hospitalizations spiked, so we don’t want to see a repeat of that,” Lowenthal said.

The city has contracted with a private firm to handle enforcement of the mask rules. So far, many of the people they have contacted are carrying masks but not wearing them, or accept a face covering provided by the health enforcement workers. In the four weeks that the mask ordinance has been in effect, the workers have contacted about 1,750 people, given out 360 face coverings, and issued 275 citations, Lowenthal said.

Mayor Mary Campbell said “egregious defiance” of the mask orders had put the city in a difficult situation, caught between residents terrified of the health risks of COVID-19 and those who find a fundamental right in maskless recreation.

“This whole thing is pretty maddening to me. People scream about it on both ends of the spectrum,” Campbell said. “Either we’re writing too many tickets and not giving enough warnings, or we’re giving too many warnings and not writing enough tickets.”

Along with the mask citations, the health enforcement workers have issued 22 warnings to people playing organized sports. The city has recently begun to focus on large groups in city parks, including some who appear to be using paid coaches. LeBaron said the strategy begins with the city’s parks and recreation staff attempting to inform participants of the rules, followed by employees from the Community Development Department warning of citations.

“But when it gets beyond the point that they’re able to safely handle it, the police department would be that third layer,” LeBaron said.

Bullying and intimidation have become common tactics for opponents of mask wearing and other rules meant to decrease transmission rates. Resistance to authority has tended to skip over police and land on unarmed code enforcement officers, or, increasingly, scientists. Barbara Ferrer, director of the Los Angeles County Department of Public Health, and Sarah Cody, public health officer for Santa Clara County, both reported receiving death threats in the last few months. Dr. Nichole Quick, the former Orange County health officer, required protection from that county’s Sheriff’s Department after suggesting a mask mandate, and eventually resigned after receiving death threats. According to a tabulation from Harper’s Magazine, 34 top state health officials across the country have resigned, retired or been fired since the pandemic began.